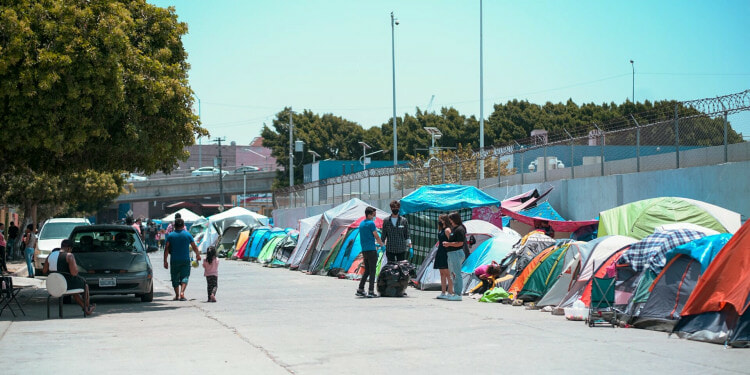 Joe Biden met this week with leaders of the USA’s bordering countries – Canadian Prime Minister Justin Trudeau and Mexican Prime Minister Andres Manuel Lopez. A key issue was immigration. Last fiscal year, beginning October 2020, the US recorded almost 1.7 million border encounters, the highest ever. The number however, has been steadily decreasing for the past few months.

Migrant caravans, consisting of large groups of people travelling together, are making their way across Mexico on foot. The travellers face breakouts of dengue fever among other dangers, and their numbers dwindle as the journey progresses.

Most of those arriving at the border are being met with expulsion, as a result of the liberal use of “Title 42,” a practice introduced during the Trump presidency.

Title 42 is a clause of a public health law, which allows the US to “prevent the introduction of individuals during certain public health emergencies.” The clause was repurposed in order to expel migrants at the border with no consideration for asylum claims.

According to Pew research centre, 66% of migrant encounters between April 2020, when Trump first began its usage, and September 2021, have ended with expulsion.

The usage of this legal mechanism under the Biden administration to deny the international legal rights of asylum seekers has been heavily criticised. It is seen as a failure on behalf of the Democrats to deliver on promises to enact meaningful immigration reform.

Human Rights First, an American human rights advocacy group, was among those condemning the use of title 42, which exposes migrants to threats of cartels among other dangers. They published a report in October documenting “7,647 kidnappings and other attacks on people blocked or expelled under Title 42 since President Biden took office.”

Human Rights First also drew attention to a letter signed by public health experts across America, addressed to the Centres for Disease Control and Prevention. The letter condemned the “implementation of the scientifically baseless and politically motivated Title 42 order.” They argued that risks of increased transmission were higher after expulsion, citing lack of access to vaccination and other public health measures.

The Biden administration has however reversed a number of key policies introduced during Trump’s presidency. This includes the infamous “Zero-tolerance” policy which saw families torn apart, with adults being detained separately from their children. Minors, including infants, were kept in austere conditions in badly managed holding facilities.

Challenges from Texas and Missouri have halted the Biden administration’s effort to do away with another key controversial Trump-era policy, the Migrant Protection Protocols (MPP), otherwise known as the “Remain in Mexico” programme. The programme was designed to stop the so-called practice of “catch and release.”

This practice was maliciously characterised by the Trump administration and right-wing commentators as constituting part of a “foreign invasion.” As described by many Trump supporters, “catch and release” was an open door through which migrants  streamed unchecked  into the US.

As explained by Vox, however, “catch and release” referred to a bundle of policies that “have the same result: The US keeps trying to deport an immigrant, but it releases her from physical custody.” The process of deportation takes time, and migrants would often have to wait weeks, or even years before a deportation order is issued by a judge, making it impractical to detain them for the entire duration of the process. It also largely only applied to families, children and asylum seekers.

The MPP or Remain in Mexico programme attempted to end this practice, by requiring that asylum seekers wait in Mexico rather than the US while their claims are processed. It is, however, at odds with international law regarding the treatment of refugees.

The policy has led to the creation of dangerous and life-threatening living conditions. Migrants were forced to take up residence in border towns and makeshift encampments, where they were subjected to severe abuse, including rape, extortion, kidnapping and assault.

A memo issued by the Biden administration in October, written by the Homeland Security Secretary, noted that the policy has resulted in “substantial and unjustifiable human costs on the individuals who were exposed to harm while waiting in Mexico.”

The memo constituted a second attempt by the Biden administration to end the programme, after its initial attempt was thwarted. A federal Texas judge ordered that the programme be re-continued, a decision that was met with criticism from legal experts. According to Geoffrey A. Hoffman, a Law professor from University of Houston, and director of the university’s legal clinic, the judge misinterpreted the law.

The section of the Immigration and Nationality Act used to justify the MPP, “authorizes the Department of Homeland Security to return certain applicants for admission to the contiguous country from which they are arriving.” However, as Hoffman explains, this section was never meant to apply to asylum seekers.

Last fiscal year saw an increase in the percentage of migrants at the border who were not from Mexico. Among those were a higher than usual number of Haitian migrants, whose harsh treatment at the hands of border patrol has been subject to much criticism.

In 2021, political instability, chaos in the wake of the killing of Haiti’s president, and the debilitating effects of an earthquake have contributed to an environment spurring many Haitians to seek asylum abroad.

The numbers of Haitians arriving at the border however have dwindled by 90% since October, after a campaign of mass expulsion under the Title 42 mechanism. A camp of 15 000 Haitians in Del Rio, where border patrol agents mounted on horses had charged at migrants in an outrageous display condemned by the Biden administration itself, was entirely evacuated in September.

It would be helpful if the US would finally acknowledge its contributions to destabilization and regime change in the region.

An important consideration is that many fleeing violent conditions were from countries within the Northern Triangle. This is a region in Central America consisting of Guatemala, El Salvador and Honduras.

John Marcus, an investigative reporter specialized in reporting on migration issues, argues that the US government played a critical role in the creation of violent conditions in Central America. He notes that the US has historically sponsored violence across the region, and has exported violent gangs formed in its prisons to El Salvador.

The harrowing ordeal of migrants expelled at the border, or trapped in untenable conditions in under-resourced border towns, speaks to a serious failure on behalf of the US to adhere to its international responsibilities, in particular under the Geneva conventions, and undo the damage of its past interference.

Editor’s Note: The opinions expressed here by Impakter.com columnists are their own, not those of Impakter.com. — In the Featured Photo: Migrant tents by the border in  Pedwest Mx. Featured Photo Credit: Barbara Zandoval.

The Science Behind Collective Climate Action