Bill Gates at COP26: Optimistic But Is He Right? 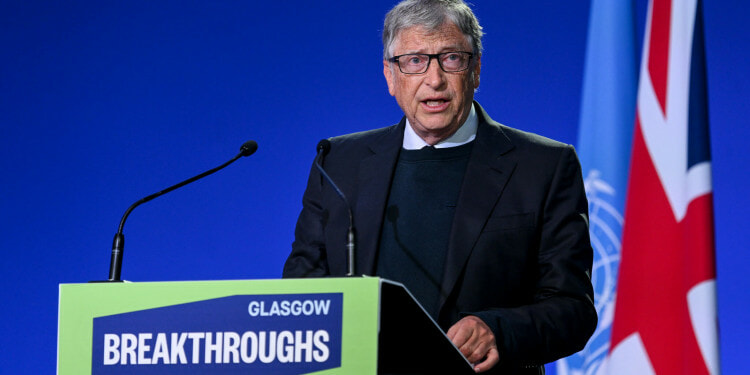 Feelings of optimism and confidence filled Bill Gates as he returned from COP26 this week. He believes the conversation towards climate change has dramatically shifted, and “for the better.”

Bill Gates is so optimistic, actually, that he believes we are coming extremely close to finding a solution for the climate emergency. And he wrote in his Notes upon returning from Glasgow:

“Some people look at the problems that still need to be solved and see the glass as half-empty, I don’t share that view, but this is what I would tell anyone who does: the glass is being filled up faster than ever”

He speaks of three big shifts that occurred throughout the UN Climate Change Summit’s conversations between Heads of States, negotiators, businessmen, and activists which will and can only positively impact the environment and make it easier to find solutions to the climate emergency. These were:

Prior to delving deeper into these ‘shifts’, it is important to highlight Gates’ journey towards caring about climate change, and his persistent focus on technological innovations as a means to solve global issues.

The co-founder of Microsoft began his philanthropic journey in the 2000s as he created the Bill & Melinda Gates Foundation. Its initial goals were to focus on enhancing healthcare and reducing extreme poverty across the world, but in 2015, his concern expanded to the need to tackle the climate emergency.

The Foundation – the second largest charitable foundation in the world, holding $49.8 billion in assets – plans to work on technologies for lowering carbon emissions, including ideas that can provide zero-emissions energy cheaply to low-income countries.

He created Breakthrough Energy in 2015 as an umbrella organisation, which would enable this green revolution, and wrote a book in 2021 called How to Avoid a Climate Disaster. This one focused primarily on the need for humans to stop adding greenhouse gas into the atmosphere, but also, on the need for greater innovations, inventions, and massive investments to encourage the development of clean technology.

No surprise, then, that Bill Gates feels optimistic towards COP26, as he declares that one of the greatest shifts in climate conversation is the unanimous agreement that funding “clean-energy innovation” is crucial to reach global net-zero by 2050.

Getting to zero carbon emissions isn’t optional. After #COP26, I am optimistic that we can meet the challenge. https://t.co/usp4V6VqCK

In reality, here, he is correct to feel somewhat optimistic. Over 40 world leaders have backed and signed up to the Glasgow Breakthrough Agenda set out by the UK Prime Minister, Boris Johnson, which hopes to accelerate investment into clean energy technologies and stimulate collaboration between the public and private sectors.

The signatories, including the US, India, EU, China, and others, hope that this approach will see a range of “fairly immature technologies” follow the same cost curve in solar, which saw a price fall of over 90% within a decade. This would undeniably help low- and middle-income countries own and use some of these new investments, inciting the green revolution to go global rather than northwards only.

Empirical data from the OECD G20 Summit report help support Gates’ claims that six years ago more people were on the “we-have-what-we-need side” rather than on the “we-need-innovation”. Whilst between 2006 and 2012, the number of new environmental-related inventions patented globally grew, they started to decline in 2013. The graph below demonstrates this:

The Glasgow Breakthrough Agenda is a positive initiative to incite a greater number of inventions and environmental developments. It could aid these technologies to be more affordable and available to all nations by 2030. The agenda lists five breakthroughs:

In support of this, the UK PM also launched the “Clean Green Initiative”, a funding package of £3 billion in investment and guarantees to support rollout of sustainable infrastructure and green technologies in developing countries. This is another program among a few others that have been established during the last few days at COP26.

But, are technical solutions enough?

Some argue that Bill Gates has a “technological solutionism” mentality, with which he believes technology is the single mechanism to solving complex problems. They believe that he, amongst many others, heavily denies the reality that technology essentially created and shaped most of the world’s modern crises, and thus cannot solve the crisis on its own.

Whilst a bit extreme, there is some truth in this belief. Technological solutions will not solve the climate change emergency IF not accompanied with more ambitious governmental policies. The OECD, for example, claimed that public policies were needed to lift the barriers to clean technological development in order to reverse this downward trend that was occurring in 2013.

Bill Gates knows this, and actually mentions the need for government policies in his book. He uses the example of deforestation: “people cut down trees not because people are evil; they do it when the incentives to cut down trees are stronger than the incentives to leave them alone” He then add, “we need political and economic solutions, [so people] do not have to extract natural resources just to survive”

So, the problem is not that Gates is unaware, but rather that he shows over-optimism towards this particular COP26. The reason people only see the glass half-empty is not because they are unaware of the Breakthrough Agenda, it is because they are still not seeing words being turned into clear cut actions. Rhetoric is the problem.

COP26 will only be seen as a success and as a catalyst for the glass to be filled quicker once governments have each individually implemented ambitious policies to deter further pollution, deforestation, or burning fossil fuels. Before this, with no evidence of actual change, we cannot be as optimistic as Bill Gates.

There have been too many allegations of greenwashing by fossil fuel companies, or even countries, such as Brazil – with Bolsonaro wreaking havoc in the Amazon -, for the youths, and activists to be blinded by a few innovative breakthroughs.

Bill Gates over-emphasises the idea that COP26 has allowed leaders within rich-nations to provide social justice to those citizens in low- and middle-income countries that have felt the climate emergency more intensely whilst having done the least to cause it.

He declares that more visibility was granted to climate adaptation. Whilst this is true, it was not for good reasons.

Greater and forced visibility was caused by a report that was published only a few days before the start of COP26 which signalled that developed countries had failed to provide the $100 billion in Climate Finance in 2020 and will not be able to provide the fund until 2023. This inevitably was the Elephant in the Room at COP26, and had to be tackled and discussed.

“The developed nations are failing us, they’re the ones with the resources and technology to make a difference yet they have left potential for clean energy and adaptation off the table by missing the $100 billion two years running… We, the most vulnerable are told to suck it up and wait until 2023”

We are yet to learn whether this amount will ever be directed towards poorer nations. Prior to this, optimism will be limited.

Since the 2015 Paris Agreement, and even before this, nations have waited for a suitable amount of money to be redistributed. In 2021, the finance still does not match the amount they need to adapt to the effects of human-induced climate change incited by developed countries.

Discussions and conversations around the issue of establishing liability and compensation for loss and damage were, also, still very much silenced at COP26 by developed countries, as they have been for years. Developing countries in the Alliance of Small Island States (AOSIS), and the Least Developed Countries Group have been pushing relentlessly with little result.

Climate change has impacted on communities with so much intensity, that they can no longer adapt but instead need financial support to rebuild, or to move away. Something Simon Kofe, Tuvalu’s foreign minister, has wanted to shed light on by giving his speech to COP26 standing knee-deep in seawater.

Images of Simon Kofe standing in a suit and tie at a lectern set up in the sea, with his trouser legs rolled up draw attention to Tuvalu's struggle against rising sea levels 2/5 pic.twitter.com/0GXU3CT5PE

So let’s return to what Bill Gates said when he talked about the empty glass being “filled up faster than ever”. Now, do you understand why I disagree with Bill Gates? It is not because he is wrong, but because he does not see why people are not over-optimistic about this COP.

Clean and Green Skincare: An Interview with Joanna Ryglewicz