‘The Billion Dollar Code’: The Tech World and its Goliaths 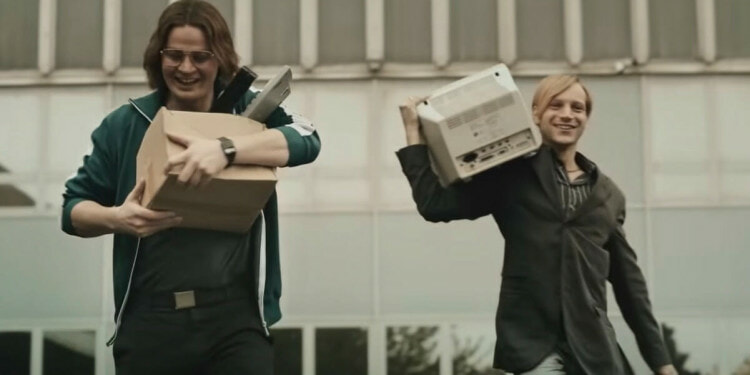 Here’s the premise for The Billion Dollar Code: imagine a technology that could let you travel to any corner of the earth from the comfort of your home computer, and view streets, landmarks, mountains and cities across the world. Sounds a lot like Google Earth, right? Well, the idea for Google Earth existed almost a decade before its initial release in 2001, and wasn’t conceived in one of the big tech companies in Silicon Valley, but in post cold-war Berlin by an art student and a computer programmer.

That is the subject of Netflix’s new miniseries, a dramatisation of the meeting of these two Berliners, and the subsequent creation of ‘Terravision’, a work of art that could zoom in on any location in the world, using satellite imagery. Once they develop the technology, with the help of computer hackers and telecommunications giant Deutsche Telekom, big tech companies become interested. Eventually, the algorithm for the technology (‘the billion dollar code’) falls into the hands of Google, and Google Earth is born.

The show is reminiscent of Aaron Sorkin’s The Social Network, the 2010 film about the founding of Facebook. Like The Social Network, it tells the story of the founding of a small company – in this case ART + COM – while also depicting the ensuing lawsuits. ART+COM sued Google in 2014 for copyright infringement. Like Facebook, ownership of the original idea is disputed, but ultimately, David is unable to defeat Goliath (spoilers here) – Facebook and Zuckerberg pay out the Winklevoss twins but don’t give them credit for the idea, and a Delaware jury finds that Google had not infringed on ART + COM’s copyright.

Legal battles in the tech world

But there are many stories like ART+COM in the tech world, which is why the show’s creators felt the need to tell this one differently. Director Robert Thalheim explained to Variety that they wanted to tell the story from the side of the “beautiful losers”, not the corporate giants who ultimately won.

As the series also shows, many big companies offered buyouts of patents from startups, ultimately not buying the patents. The startups, however, did not sue, because legal fees would have cost more than the buyout. In fact, the film mentions the cost of litigation which in the U.S. is extremely high, from $5 to $10 million. The size of large tech companies naturally stacks the deck in their favour when it comes to litigation. Even though ART+COM’s case is very strong, Google still wins in the end. In the series at least, Brian Anderson, the man who created Google Earth, lies and claims that he did not tell them that Google Earth could not have existed without Terravision.

The Billion Dollar Code also portrays the naivete of techno-libertarian types in the advent of the internet, believing that the vast and mostly unregulated web would always stay that way, free of the influence of governments and monopolies. Even the big companies seem different, more benevolent, and focused purely on innovation: the main characters discuss with excitement Google’s interest in their idea, and their motto ‘don’t be evil.’ Of course, their opinion on this changes, as we move forward to the present day, them mockingly using this slogan in front of Google’s lawyer.

Today the internet looks very different to how it did in the early 90s – and that is certainly one of the strong points of the series that depicts it beautifully, especially the early years in the Silicon Valley and the differences with Germany (and Europe), where people did not fully grasp the groundbreaking novelty of the internet. Unlike the Americans, people in Europe did not view it as a commercial proposition – Terravision suffered from being seen more as an artistic experiment than a digital innovation.

Now, vast swathes of the internet are controlled by a handful of companies, Google being one of the largest among them. We are also now more reliant on them than ever before. When Facebook and Whatsapp went down last week, it had a huge effect on businesses and communication worldwide, especially in Latin America, where 85% of internet users depend on its services.

Related Articles: Facebook and its Horrible, No Good, Very Bad Week | Don’t Be Evil: the Other Side of the Tech Industry | Is Berlin The Next Tech Start-up Capital?

Questions raised by the series: how free should the internet be?

All in all, The Billion Dollar Code poses some very interesting questions. How free should the internet be? Freedom online can mean anonymity, and therefore the ability to discuss ideas without fear, escaping censorship laws or taboo topics.

One of the protagonists, Juri Müller, tells his partner that a proto-internet consisting of a phone network available to all, gave him an anonymity that made him feel like he belonged with other people for the first time. But that same anonymity allows hate speech and misinformation to spread. It’s fair to say that companies have been getting better at cracking down on this, but again we should ask why it should be left to private companies, and not governments, to decide how these large online networks are regulated.

Governments in the past have been unable to take enough action against “Big Tech”, partly due to a lack of understanding of the technology, and also because of tech giants’ secrecy. But we are starting to see progress: the U.S. government has filed numerous anti-trust lawsuits against Facebook and Google alleging that they have abused their power as companies. Regulations in the EU have generally tightened, with GDPR data protection rules, as well as rules to make digital markets fairer.

The Billion Dollar Code is a well written, fast-paced, and unique take on legal battles in the tech world. It’s an entertaining and emotional depiction of real and extremely relevant events. The way the series depicts the nascent web of the 90s seems to call for a return to a more decentralised internet and one that would give more space to innovation than profiteering.  Could this work in actuality? If it is to be achieved, radical steps to break up Big Tech would be needed in order to open the market to startups and give them breathing space to grow, similar to those outlined by Elizabeth Warren in her bid for the U.S. presidency.

Regardless, there is a conclusion that can be taken away: more work needs to be done to fight the monopolisation of the internet and bring more accountability to the giants of the digital world. The end of the series in the U.S. courtroom, with the verdict going against ART+COM, leaves the viewer with a bittersweet taste in the mouth. The Google victory appears supremely inelegant, squashing innovation in the name of profit, and one is left wondering whether Google could not have spared some of its mountain of cash in the name of justice. Regardless of whether the Terravision patent was infringed or not, the fact remains that the technology was invented independently, was shown around the world and existed ten years before Google Earth was launched.

Editor’s Note: The opinions expressed here by Impakter.com columnists are their own, not those of Impakter.com. — In the Featured Photo: Still from Netflix’s ‘Billion Dollar Code’ Trailer. Featured Photo Credit: Netflix.

The Presence of Illegal Pushbacks at EU Borders Is Exposed