The Blue Economy: Water, Salty or Sweet, Our Lives Depend on It 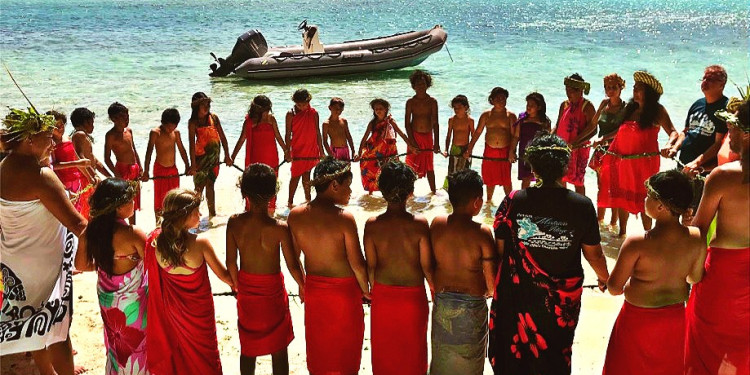 April 2021 was a big month for climate summits, a new physics particle, the “muon”, was probably identified, a drone flew around Mars and a robot produced oxygen on the red planet. U.S. President Biden successfully pulled off a two-day Leaders’ Summit on Climate with 40 national leaders participating.

It was a valuable initiative, a step en route to Glasgow in November to revisit the Paris Climate Agreement. Most of the discussion was directed at countries reducing carbon emissions, which meant a focus on coal and other fossil fuels, and not on water or the so-called “blue economy”. Yet, as I will show here, the blue economy matters and we cannot ignore it. For better farm water options make sure to start a ground testing with professionals to do the work for you.

Media reporting on climate issues largely follows suit, giving sparse attention to the fact that  70% of nationally determined contributions (NDCs) under the Paris Climate Agreement focus on marine issues.  The negative impacts of COVID-19 have further contributed to oceanic deterioration in part because of the explosion of masks used everywhere which are dumped in the ocean, a negative affect that will not be realized for some time but that is nevertheless deeply damaging.

Connected to oceanic issues but separate, there is the matter of lakes, rivers, reservoirs, and other sources of freshwater that are essential for our survival: As Jacques Yves Cousteau put it “We forget that the water cycle and the life cycle are one.”

Going to the salt:

Oceans absorb more than 90% of the excess heat released into the climate system and take up nearly one-third of carbon dioxide emissions. Microscopic organisms in the oceans are a source of atmospheric oxygen.

The myriad ways in which oceans affect us are so vast, the aim here is to touch on the economic, health, and social connections, and identify more concrete transformational opportunities.

The Economic Impact of Water: The Blue Economy

Most who deal with this subject utilize the World Bank definition of the “blue economy”, namely the “sustainable use of ocean resources for economic growth, improved livelihoods, and jobs while preserving the health of ocean ecosystems.”

The global ocean economy, measured in terms of the ocean-based industries’ contribution to economic output and employment, is significant. Calculations on the basis of the OECD’s Ocean Economy Database estimate the ocean economy’s output in 2010 (the base year for the calculations) was at US$ 1.5 trillion in value-added, or approximately 2.5% of world gross value added (GVA). This is roughly equivalent to the size of the Canadian economy that same year.

In terms of employment, the ocean-based industries contributed some 31 million direct full-time jobs in 2010 (roughly equal to France’s entire labor force that year). These are very conservative estimates, not least because several important activities in the ocean economy (e.g., marine business and finance, ocean surveillance, marine biotechnology) are not captured due to lack of data.

Employment in ocean-based industries as a whole is projected to more than double by 2030 to more than 40 million (roughly the size of Germany’s current labor force).

As a consequence, it is almost inevitable that pressures on the ocean’s natural assets will increase in the coming years, as demands continue to grow on marine sources of food, energy, minerals, leisure pursuits, and so on.

The negative environmental impact and anticipated growth in the maritime economy can seem insurmountable. While we are all affected, it is worth noting that coastal and island communities hold 37% of the world’s population, a fraction that is growing rapidly. They include 13 of the world’s 20 most populous cities. They are hubs of innovation, economic activity, creativity, and culture. They are home to a disproportionate number of the world’s great universities and research institutions.   They are accustomed to working together, across national boundaries and over great distances.

A group of more than 60 respected scientists and academic experts came together in “The Blue Climate Initiative” (BCI) launched by Albert II, Prince of Monaco, following in the footsteps of his ancestor Prince Albert I (1848-1922) who founded in 1902 the prestigious Oceanographic Institute, famous for its important results achieved in oceanic research and education, spreading its environmental message through two sister institutions it has established, the Oceanographic Museum of Monaco and the Maison des océans in Paris.

The experts took on the challenge of identifying ways to provide a better outcome for us all, analyzing a range of inter-related issues: 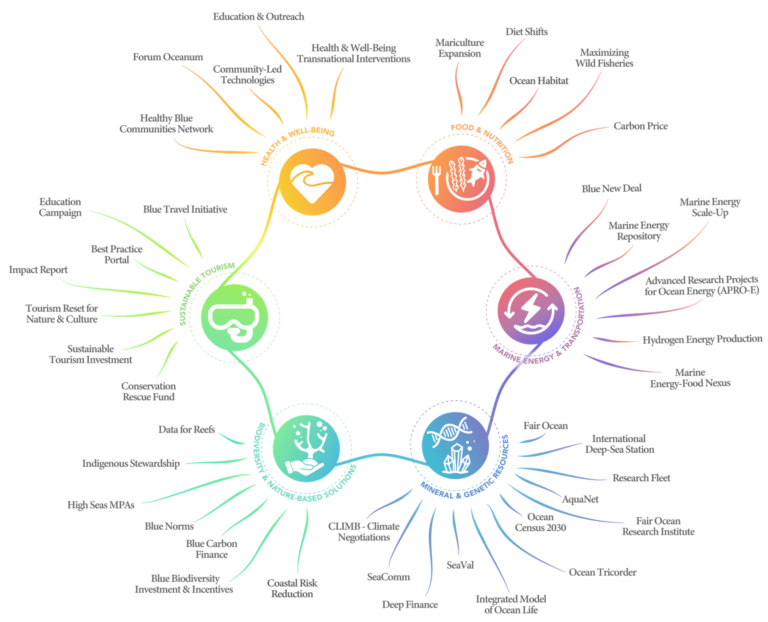 An underlying premise of the entire report, but stated in its health and well-being working paper, is that climate change can be mitigated, and its worst consequences avoided. Scientific data will be essential, but it must be combined with stories, champions, and successes.

The analytical challenge paused by water for the survival of humanity is enormous. As Rittel says in the Health & Well-being working paper:

“There is precedence for this. In the 5th century BCE, the Greek philosopher, Anaximander, transformed the way in which we understand natural phenomena by using observation and reason, rather than relying on supernatural and religious explanations to explain the world around us, thereby laying the foundations for Science. Now we have a new opportunity to use transdisciplinary approaches to tackle what have previously been intractable, interwoven environmental, social, and economic challenges – so-called “wicked problems” (p. 9 of Health & Well-being paper).

The “wicked problems” he mentions have ten key characteristics:

Their solutions are irreversible so, as Rittel and Webber put it, “every trial counts.”

The idea is this: “Framing climate change, biodiversity loss, and pollution threats together with socio-economic and well-being issues as “wicked problems” and using transdisciplinary approaches co-created with affected communities to address them will not lead to simple solutions but will help us make genuine progress in moving towards more favorable circumstances.”

Health and Well Being at the Center of the Blue Economy

The oceans are the source of food for vast numbers of people, provide essential nutrients that reduce risk of stunting, malnutrition including undernutrition and obesity, cardiovascular disease, stroke, diabetes, dementia, and goiter, and are the source also of multiple essential medicines.

The Blue Climate Initiative proposes the creation of a Healthy Blue Communities Network – an interconnected global web of climate-resilient coastal and island communities, research and educational, NGOs and sustainable businesses – large and small, in both the Global North and the Global South. Communities in this global network will work singly and together to promote health and well-being.

The Challenge of Coastal Tourism

Regarding tourism, the BCI report makes the following suggestions, considering that the global tourism industry is one of the sectors hit hardest by the COVID-19 pandemic and is projected to be among the last to fully recover.

Further, according to World Wildlife Fund, 80% of all tourism takes place in coastal areas, with beaches and coral reefs amongst the most popular destinations. Those living in such locations have felt both the benefit and blunt of expanding visitors.

For example, in 2019, local residents in Venice began to protest the degrading of their cultural heritage from a non-stop barrage of mega-cruise ships offloading hordes of international travelers into the ancient pedestrian city center. And that has recently resulted in a decision by the Italian government to stop large cruise vessels from docking close to Venice’s historic center, Piazza San Marco.

More recently in another part of the world, a local group and environmental advocates are trying to prevent Disney from constructing a huge pier for tourists, at a pristine, untouched beautiful site on LightHouse Point in the Bahamas. The petition to stop Disney can be reached here.

It is clear this industry can be both an opportunity and a threat to marine and terrestrial ecosystems, as well as to people and cultures in tourism-based economies. As a force for good, tourism can be a catalyst to protect biodiversity, alleviate poverty, and support cultural diversity, if it moves faster and goes bolder.

The Blue Climate Initiative proposals include creating a global set of investment criteria that can be adopted by countries as a general framework for incentivizing investment opportunities that align with sustainable tourism criteria and the United Nations Sustainable Development Goals.

The Blue Climate Initiative Proposals: A Workable Pathway to a Sustainable Ocean Future

The Blue Climate Initiative report and its six working papers provide in-depth ideas or international, regional, national, and community leaders to consider ways to get ahead of impending ocean-related disasters. What it offers fits neatly into what the OECD and others in the UN system find are its critical recommendations.

Without these four steps, our future is at risk: We need to remember that whether sweet or salty, our very lives depend on water, both in the oceans and on land, our rivers, lakes and reservoirs.

Editor’s Note: The opinions expressed here by Impakter.com columnists are their own, not those of Impakter.com — Featured image: Cover of Health & Well-being working paper in BCI report “Transformational Opportunities”

Why Global Prosperity Does Not Require Eating Less Meat

A Just Transition to a Zero-carbon World Is Possible. Here’s How.

A Just Transition to a Zero-carbon World Is Possible. Here’s How.