Is Brexit a Defeat for Europe? 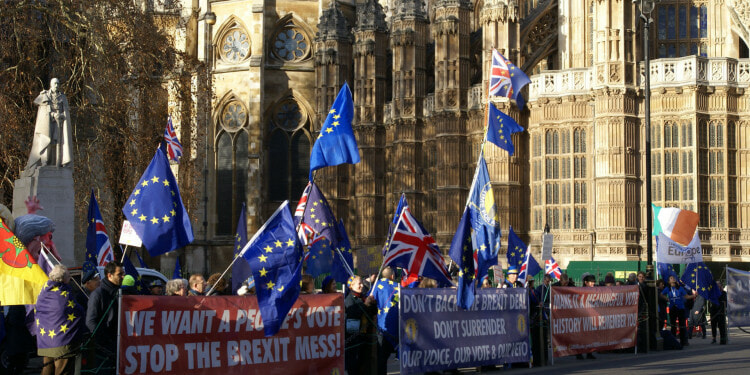 The judgment is out, Brexit is a defeat for Europe and the European project. And for America too. It will weaken the European Union on the international scene and slow down integration. That, at least, is the judgment you find in the major American and English press.

The New York Times, for one, came out (29 January) with an alarming article by Steven Erlanger, Pulitzer Prize winner and chief diplomatic correspondent in Europe, with a telling title: Brexit Is Here, and It’s a Texas-Size Defeat for the E.U. The subheading aptly conveys his main point:

“The loss of such a rich, sizable, powerful member state will weaken the European Union’s momentum and its diplomatic weight”.

Ian Lesser, a former American diplomat who is now the director of the German Marshall Fund’s Brussels office, neatly sums it up:

“It’s a defeat for everyone — for the European project, for Britain’s position in the world and for American interests, since the U.S. was the beneficiary of Britain in the E.U.”

How true is all this? Is Brexit really a defeat for the European project? Or is it, on the contrary, a shot-in-the-arm, just what was needed to revive the European dream?

First, let’s be clear about this: It’s much too early to tell.

We need at least three years of effective Brexit. In other words, we need to be well past the 2020 December deadline now set for the exit negotiations. Assuming they have reached a “happy conclusion” and that the UK is effectively out of the EU at that date, we would still be unable to assess the full economic and diplomatic impact of Brexit before 2024 or 2025.

Many factors come into play here. First, America’s reaction. Second, the EU reaction. What will be the impact of Britain’s withdrawal from the EU? Assuming the UK does not break apart with Scotland voting to become independent (and joining the EU) or Northern Ireland collapsing into another round of catastrophic “troubles”, some sort of an answer is discernible, using the available economic and geopolitical data.

Brexit Impact on the EU

Consider the “classic argument” that Britain has played a useful role in smoothing out EU internal tensions. Mark Leonard, the director of the European Council on Foreign Relations expresses this idea best:

Britain’s departure, he said “changes the balance within the E.U. and creates a power vacuum. The absence of Britain will make the relationship between France and Germany even more toxic. But it also destabilizes a lot of the countries, like the Dutch and the Nordics, on issues like the free market, anti-Russia policy, and trans-Atlanticism. And it will further the imbalance between the eurozone and non-eurozone countries, leaving those like Poland, Sweden and Denmark more exposed.’’

But what if Britain’s presence actually acted as a brake on the European project?

This is a point none of these (Anglo-Saxon) experts are raising. Yet, again and again, the British have slowed down the move towards a stronger Europe, never entering in any of the pacts going in the direction of greater integration, from the Euro to Schengen.

A 2018 report commissioned by the European Parliament to an independent team of academics, assessed the role played by the UK in five key areas: the internal market; social policy; the area of freedom, security and justice; foreign, security and defense cooperation; and the Eurozone.

The team found that, while the UK’s influence was positive for the single market whenever it aligned with its own free trade policies, “in some areas the UK has delayed or blocked European integration, making it more of an awkward partner in European integration than most other Member States have been.” And it concluded that “while the EU is unlikely to disintegrate because of the UK’s withdrawal, significant systemic challenges remain” for the EU.

In short, the UK was found to be an “awkward partner”, not the only awkward partner. For example, the UK has always been a close ally of Sweden when it came to “power issues within the EU, such as free trade and member nations’ right to decide for themselves”. And there are many more “awkward partners”, especially the Visegrad group of countries (Eastern Europe with Hungary in the lead) that are becoming “illiberal democracies”, flouting the core democratic values of the EU.

So the “systemic challenges” are very real.

On the other hand, since that report was written, people have exhibited progressively less desire to leave the EU. Populist parties across Europe have stopped calling for Frexit, Italexit, Grexit or any other exit. And Europeans across the continent rally behind the new Commissioner’s Ursula von der Leyen’s green policy, the European Green Deal. Europe appears to be on course to become the first climate-neutral continent by 2050.

Yes, not everyone in Europe, especially climate activists like the gentleman from the Rosa Luxemburg Foundation in the above video, agrees that the EU Green Deal can solve the problem. But at least the issue is front and center across Europe, UK included. And we need to remember that the Extinction Rebellion was born in the UK.

So, policy-wise, the US and UK are far apart. Can economics bridge the divide?

The US appears to be dangling a juicy trade deal as soon as Brexit is completed. That’s what Trump has said several times, it’s one of the weapons in his war with Europe. And it’s the main UK hope, in fact, driving Johnson’s policy in his dealings with Trump.

But judging on how fast such “deals” get negotiated, it won’t happen overnight. Actually, it could take several years.

Consider the NAFTA experience. Its overhaul and the final conclusion took almost all of the four years Trump has been in the White House. The revised trade agreement, now called USMCA, was finally officially signed on 29 January 2020. The outcome wasn’t a dramatic change: It essentially amounted to a revision of Mexico’s labor laws and a (potential) boost to auto production in the US. While here, with the UK, we are talking about an entirely new trade agreement, one that will have to be built up from scratch.

The UK, unlike Mexico or Canada, is not a next-door neighbor. The situation is totally different. Look at the latest trade figures (2018 data from the House of Commons Library). The UK had an overall trade deficit of £66 billion with the EU. To understand how this happens you need to consider the overall structure of UK trade.  It runs a surplus of £28 billion on trade in services with the EU but that is outweighed by a deficit of £94 billion on trade in goods.

The situation with non-EU countries (thus, including the US) is the reverse: The UK runs a trade surplus of £29 billion, as a result of a £77 billion surplus in trade in services that is outweighed by a £48 billion deficit in trade in goods.

What is interesting to note here, is that the UK trade in services with non-EU countries is in a healthy surplus, over twice as important as the one it achieves with the EU. Whether there’s any space for the UK to grow that trade in services with non-EU countries is unclear – it’s probably unlikely. But the UK’s real weakness is in its trade in goods, and it is particularly important with the EU, far more than with the US.

The upshot? The UK, when it comes to its trade in goods has very little leeway, given its geographical location (next to the EU, far from the US, across the Atlantic). Any deal with the US, even a very favorable one, cannot change the geography. The UK is not self-sufficient in food production; half of the food it consumes is imported and the proportion is rising. The UK will necessarily continue to depend on the EU in its trade in goods.

Any trade with the US has to take into account transport costs. Because of Brexit, the UK will simply have to pay more for imported food and other goods, no matter whether sourced from the EU or the US. Meanwhile, its trade in services with non-EU countries is likely to remain unchanged, while it could diminish with the EU.

Overall, not a good outcome for the UK, while it’s somewhat indifferent to the EU. At best, the EU internal trade in services is likely to grow, taking up the slack caused by the UK withdrawal. In other words, the upshot is a smaller role for the City but rumors are (still unfounded) that London bankers are shaping up to turn it into Singapore on the Thames, across from the shores of Europe.

In short, the UK, trade wise, is caught between two giants: the US and the EU. And its trade matters little to either. The UK accounts for less than 10 percent of the EU’s overall trade. And U.S. exports to the UK accounted for 4.0% of overall U.S. exports in 2018. Not a comfortable place to be to start any trade negotiations.

Why Brexit is not a defeat for Europe

Consider how likely it is that the UK will re-align with the US, away from the EU. Not that likely, and there are good reasons for that. Politically, the UK can’t afford to look like Trump’s “poodle”: The lesson from Blair’s unconditional support of Bush’s war in Iraq has not been forgotten by the British people.

More generally, deep political disagreements between the UK and the US persist, Brexit notwithstanding. Among them:  Iran, Israel-Palestine, northern Syria, Turkey, climate, trade, the World Trade Organization, and Huawei (over 5 G). On all these issues, Britain has remained aligned with Europe against Washington.

Inevitably, UK withdrawal from the EU is not likely to change major geopolitical alignments. The EU minus one member, even minus one like the UK which contributed about 12% of its budget, won’t become politically weaker.

Political strength on the international scene is not a matter of budget but of political will.

Take the example of Russia. Essentially a small country in terms of population (one-third of Europe) and GNP (at the level of Italy). But with a political will and strategic international policy goals personified by Putin. Yet, for America, it is the quintessential enemy and rival. While the Trump Administration prefers to view Europe as a formless mass of insignificant countries that can be pushed around.

In fact, the real challenge for Europe is not whether it has lost one member. Brexit is a sad affair but it will whither away. The real challenge is whether the EU can muster the political will to overcome differences and bring the European project to completion. Much will depend on the French-German entente. For the time being, French President Macron is the undisputed champion of European integration while German Chancellor Merkel is heading for the exit. Whoever comes next in Germany could make a difference. A much-needed difference – far more so than Brexit.

How to impact climate change adaptation and mitigation around the world

How to achieve large-scale impacts from agricultural innovations

How to achieve large-scale impacts from agricultural innovations