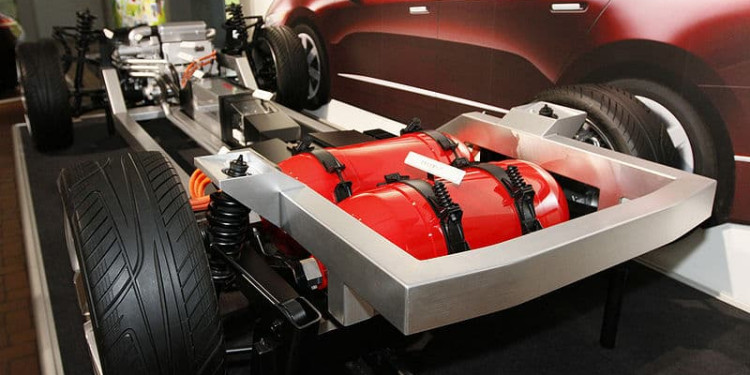 TH₂ Motors plans to develop a vehicle powered by a small electric battery and a solid oxide fuel cell that can run off emissions-free liquid fuels such as ethanol or methanol.  Jared’s Ph.D. in Engineering and Public Policy as well as his experience as an independent consultant focusing on energy policy for electricity markets might be why he has been able to find an innovative way to change the future of the automotive industry.

We have been able to interview Jared to speak about the future of TH₂ Motors.

Can you please explain the synergies between your different projects? How those will help launch TH₂ Motors?

Jared Moore: All projects lead to one coherent vision for emissions-free liquid fuels.

TH₂ Motors is the first subsidiary to be developed and will utilize ethanol as a transition fuel.  It will also demonstrate methanol’s competitiveness as a hydrogen carrier for fuel cells.

Methanol is a liquid and would then help pave the way for another liquid fuel, ammonia, which does not emit CO2 upon combustion and is envisioned to replace natural gas.

Once the technology works on the TH₂ Motors vehicle, then we can tune the engineering for the next subsidiary named Oxyfuels. Oxyfuels is the subsidiary that will produce the fuels for TH₂ Motors (methanol) as well as ammonia and other fuels.

The third subsidiary of the conglomerate is named Carbon Exchange, and that will be a gas station that’s going to take back the CO2 from TH2 Motor automobiles.

The fourth subsidiary will be a pipeline company to transport and manage CO2 sequestration, enabling all this carbon usage to be emissions-free. The fifth subsidiary will be an industrial heat company using fuel cells and electrolyzers. The sixth company is for biofuels (ethanol) and the seventh one is in the field of aviation.

If you put them all together, it’s an emissions-free hydrocarbon economy without requiring the work of carbon capture, only sequestration.

What will be the cost to produce such a vehicle, in comparison to other fuel cell-powered vehicles and battery-powered EVs? And how much do you aim to sell the for?

J. M.: I am planning for this vehicle to be much cheaper than an exclusive battery-powered electric vehicle because that kind of EV is influenced by the battery cost – usually around $10,000-$20,000. Since our battery is 10 times smaller, we should be able to reduce costs significantly.

Another way we are going to reduce the cost is on materials: we don’t have to make an extremely lightweight vehicle structure because we will not have a heavy battery. We will have a tank of methanol which is far, far more energy-dense than a battery because it doesn’t have to carry the oxidant with it.

I think that it’s going to be about the same cost as an internal combustion engine (ICE) vehicle because the ICE is actually pretty complicated, and you have to use a lot of balancing equipment to hold the engine in place while distributing mechanical power to wheels.

The cost of solid oxide fuel cells should reduce greatly with economies of scale.  Each car only needs a fuel cell of about 10 kW or 15 hp to keep the battery charged, and a fuel cell that size doesn’t contribute much to the weight.

Can you please explain the fuel cell and battery technology that you are planning on using?

J. M.: The battery technology we’ll use is standard lithium-ion cylindrical or pouch cells. The vehicle is basically going to be a plug-in for most miles.

When the battery runs out, at about 35 miles or so, the fuel cell technology will engage to keep the battery at a minimum charge level.

Another advantage of a solid oxide fuel cell is that it can operate at 900 C° and a PEM fuel cell operates at only a couple of hundreds Celsius.  Thermodynamics tells us that the increased temperature gives us the ability to use the heat more effectively.

That heat will reform the methanol and ethanol to syngas to fuel the cell.  The heat will also help change the phase of the CO2 from gas to liquid. The liquid CO2 will be stored on the empty side of the gas tank and then returned to the gas station for eventual sequestration. Our concept vehicle will show that we can create and keep the liquid CO2 onboard with minimal effect on efficiency.

In the cover picture: Hydrogen Tanks installed in a car. Image not related to Thermal Hydrogen Industries. Photo Credit: Wikimedia.

Editor’s Note: The opinions expressed here by Impakter.com columnists are their own, not those of  Impakter.com

6 Ways to Remove Carbon Pollution From the Sky