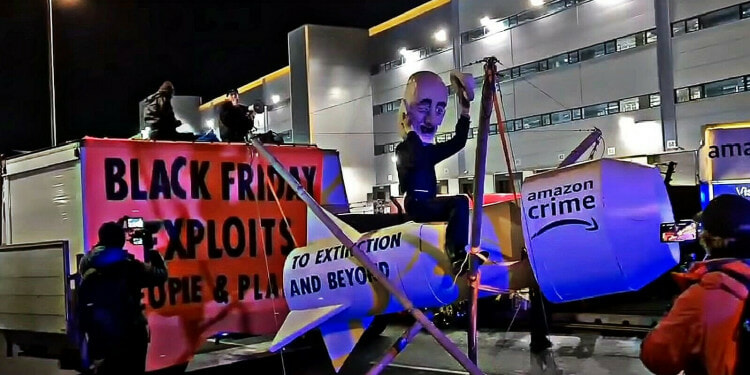 Yesterday, Extinction Rebellion activists blockaded Amazon distribution centres across the UK including sites in Dunfermline, Doncaster, Darlington, Newcastle upon Tyne and Manchester. The protestors locked themselves to one another and assembled bamboo structures outside the Amazon sites in order to disrupt distribution networks on Black Friday.

More than 60 protestors have been arrested and a number of blockades had been cleared by mid-afternoon yesterday. However, protesters at Rugeley said it was “non-violent action”. The activists claimed to be aware they had “upset quite a few people today” but that they had “tried using usual avenues and nothing is changing”.

Despite almost 60 arrests 6 @amazon warehouses remain blocked in the UK as #ExtinctionRebellion took action against over 50% of their UK sites today to confront a company that steals from the people to fuck the planet. #BlackFridayAmazon #MakeAmazonPay #ClimateCrisis #ActNow pic.twitter.com/Pk1sTbqdNT

Protestors highlighted “the damage [Amazon] is doing to the environment” and “the burned-out workers who are denied the right to unionise in most places”.

Black Friday is the busiest time of year for Amazon as advertised deals and lowered prices encourage shoppers to make huge orders. Last year’s Black Friday was the biggest in the company’s history, as the coronavirus pandemic forced people to do more of their shopping online.

And, the UK Extinction Rebellion protestors are not alone in expressing their disapproval.

In a wider movement across multiple countries including the US, the Netherlands and Germany, an international coalition of unions, equality and environmental groups called “Make Amazon Pay” has been staging action days.

Much like the UK’s Extinction Rebellion Movement, “Make Amazon Pay” is also demanding that Amazon makes changes including improved pay, an end to employee surveillance, and union engagement. Amazon has been criticized for its treatment of workers who have described appalling work conditions, unrealistic productivity targets and a refusal to engage with unions unless forced.

So @JeffBezos you have billions, how about sharing some of it with the #frontline workers whose labour provided your wealth? The ones risking their lives for you? #Amazon #MakeAmazonPay https://t.co/BrtflNmStv

Amazon’s Sustainability Report in 2020 disclosed a 15% increase in its carbon footprint. This has been described as a result of the company’s growth throughout the pandemic where the online retailer benefitted from a marked decrease in in-person shopping. As UK Extinction Rebellion signs read, Amazon’s “infinite growth” is indeed leading to a “finite planet”.

This increase comes just one year after the company co-founded the Climate Pledge, a commitment to reach net-zero across their business by 2040. Some of these commitments include making all Amazon shipments net-zero, powering all operations with 100% renewable energy and investing $100 million in reforestation projects and climate solutions.

In fact, the real story about Amazon’s impact on the environment is very different from what it pledges to do. On the Impakter Sustainability Index – the result of research by an independent team of experts – Amazon is rated a “C” for mediocre. The reason? As explained in the Impakter Index evaluation: “Despite Amazon’s commitment to building a sustainable business, they continue to engage in partnerships with multiple oil and gas companies.” And the outlook is negative: “In addition to partnering with oil and gas companies, Amazon is expanding their operations, having added 12 additional aircraft to their fleet and on-the-ground operations.”

But now, at COP26, Amazon founder Jeff Bezos has announced that his Bezos Earth Fund will spend $2bn in restoring landscapes and transforming food systems. Bezos revealed that his experience of traveling on his rocket ship in July had given him a new perspective on the Earth’s vulnerability.

What does Amazon say?

In response to the UK protests on Black Friday, an Amazon spokesperson said the company took its responsibilities “very seriously” and that the company acknowledges there is “more to do”. They also said that they’d “continue to invent and invest on behalf of our employees, customers, small businesses and communities in the UK”.

While it is still unclear as to what impact the protests have had on Amazon deliveries, it is likely that they were minimal since the protesters were quickly dispelled. This probably works to the Extinction Rebellion’s advantage: They were able to make their point with minimal damage to consumers. It would appear that such protests require a delicate balancing act between drawing attention to the climate cause and not creating disruptions that turn people away and alienating them from their cause, something Extinction Rebellion has sometimes been accused of.

Whether Amazon will respond in a constructive manner with changes in the company’s policies, remains to be seen.

Editor’s Note: The opinions expressed here by Impakter.com columnists are their own, not those of Impakter.com. — In the Featured Photo: Black Friday Protests Against Amazon, Dartford, Kent (UK) (26/11/21)Featured Photo Credit: screenshot from The Sun video