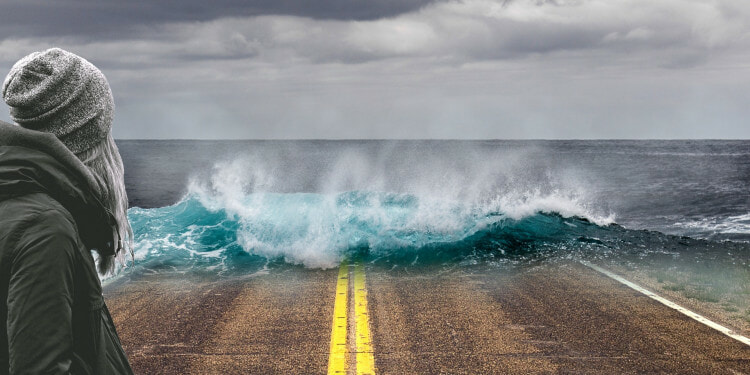 Will climate change and global warming eradicate humans? This summer, the worst scorcher to date, has become a season for panic: wildfires across the Western United States, Greece and Sweden, record temperatures in China, unprecedented floods in India and Japan, a surge in heat waves in urban areas that are predicted to get worse by 2080, killing up to four times as many people as they do today.

With Trump’s America leading the charge, pulling out of the Paris Climate Agreement and pulling down every environmental protection rule, it looks like the battle for Earth and our survival is lost.

After all, America is still the largest industrial country in the world and a major polluter, on par with China. And while China “got the message” and is at least trying (though not always successfully) to curb its climate-destructive ways, America is not.

True, single American states, like California and a few others, as well as big cities like New York and San Francisco that have joined a world alliance of big C-40 cities, are trying their best to counter climate armagheddon.

But that’s not enough. The problem is Washington and Trump. American climate deniers are having a field day, and they are winning.

Earth lovers and tree huggers are fighting back. The New York Times this week came up with an extraordinary piece of long journalism. In a single-theme issue of its Magazine, focused on climate change, it published an authoritative article with the striking title: Losing the Earth: The Decade We Almost Stopped Climate Change.

The article is both a mesmerizing and heart-breaking read. It helps dispel the cultural amnesia we suffer from too often, the idea that the climate change fight is something recent. Or that the fuel industry wasn’t aware of the dangers of fuel emissions – it was well aware of them, as far back as the 1950s. And at first, it had even tried to play along and prepare for an alternative green energy future: Exxon financed honest, independent research…until it didn’t.

The article was put together over 18 months with support from the Pulitzer Center on crisis reporting. It was written by author Nathaniel Rich, whose apocalyptic novel Odds Against Tomorrow was an instant bestseller when it came out in 2013. 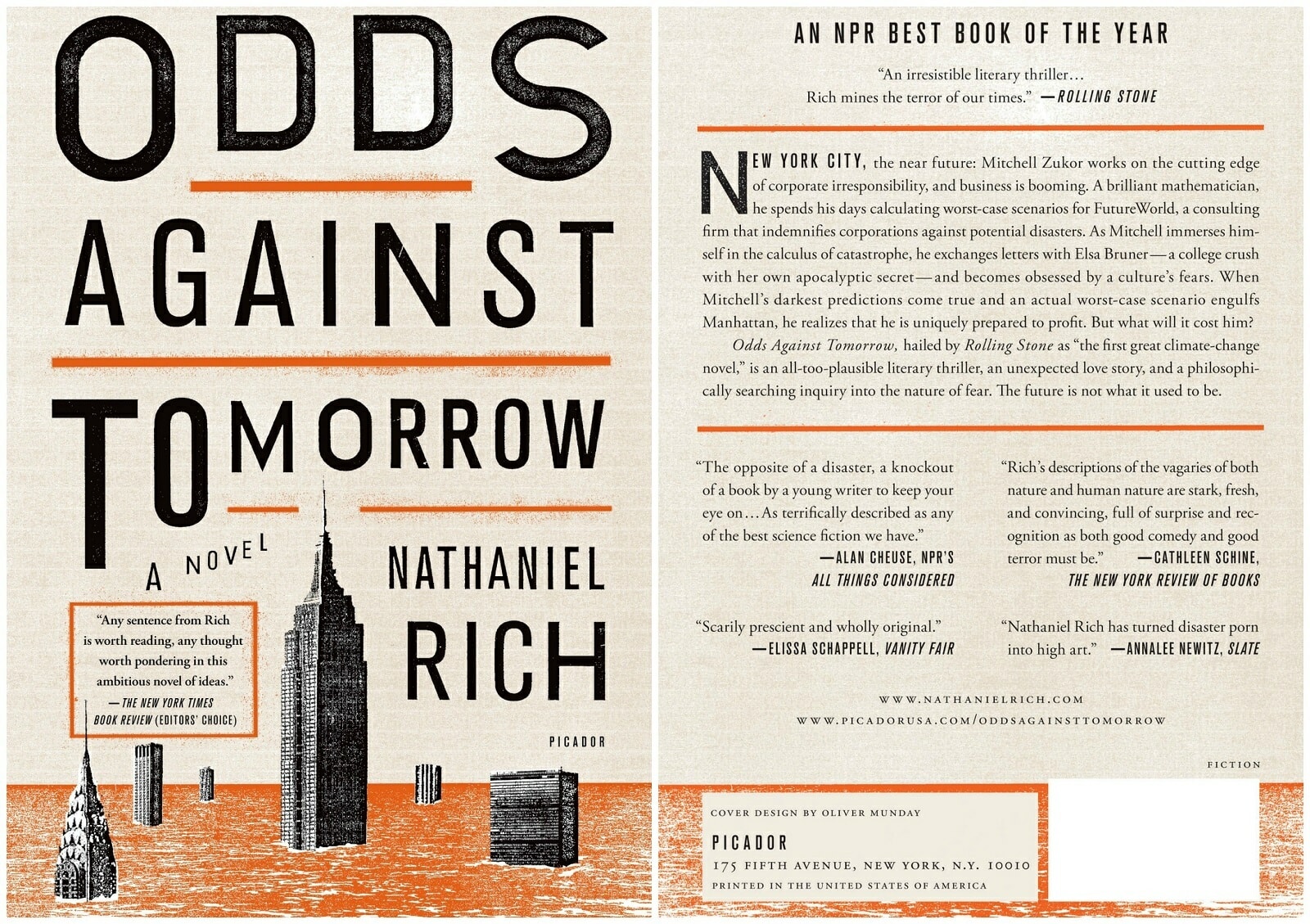 That book made Rich one of the young and rising stars of climate fiction, a new genre that went viral with the new century. This is a novel I read with great pleasure when it came out, a not-to-be-missed thriller with unexpected twists and turns that will bring home what it feels like when your town is flooded (in this case, New York).

The article is illustrated with stunning video and photo work from award-winning photographer George Steinmetz who specializes in aerial imagery.

The online version starts off with a long video shot of melting snow and the stark words:

“30 years ago we had a chance to save the planet.”

Then a desolate landscape of burnt houses and skeletal trees:

“The science of climate change was settled. The world was ready to act”.

Finally a near-empty expanse of sand dunes dotted with a few scattered cabins:

“Almost nothing stood in our way – except ourselves.”

What follows is a harrowing tale of everything that went wrong in spite of the best of intentions. It reads like a political thriller, but it is a tragedy, the story of how we could have saved the world. Thirty years ago, we all knew what needed to be done. And in a single short decade – from 1979 to 1989 – we lost it all.

As late as 1987, when the United States signed the Montreal Protocol on Substances that Deplete the Ozone Layer, Reagan’s E.P.A. Administrator Lee M. Thomas told reporters that global warming was “likely to be the be subject of a future international agreement.” It was the obvious next step.

Alas, the global treaty to curb carbon emission was still-born. If we had implemented it back then, global warming could have been kept below 1.5 degrees. And we wouldn’t be facing the issue today.

Climate Change: A Thirty-years War that is Turning Ugly

The battle over climate change has turned into a 30-years war and is far from finished. But it’s turning ugly. Climate deniers have pulled all the stops: Not only do they pooh-pooh evidence-based scientific findings as they’ve always done, they have now turned to cynically manipulating findings to make them mean anything to suit their convictions.

That is how a new front opened up in the climate change war: Global greening vs. global warming. The story that exploded around the “global greening” caused by human activity and the way climate deniers took advantage of it, is the latest egregious example of this manipulation.

Here is the story. A group of nine researchers from France, Finland and the U.S., led by Dr. J. Elliott Campbell of the University of California, Merced, have analyzed the air bubbles trapped in Antarctica ice and discovered that plants grew faster in the 20th century than at any other time in the last 54,000 years. In an article in the journal Nature, they reported that plants are converting 31 percent (+ or – 5%) more carbon dioxide into organic matter than they were before the Industrial Revolution.

The Competitive Enterprise Institute triumphantly touted the news after Campbell’s findings came out, with an article titled ”Yet another study confirms the ecological benefits of carbon dioxide.” The CEO of Heartland Institute likewise rejoiced in a piece co-written with Peter Ferrara for the Wall Street Journal, noting that “even global warming has positive effects”. Thanks to fuel emissions and fertilizers, the Earth is getting greener!

Unfortunately, it doesn’t work that way.

As explained by New York Times reporter Carl Zimmer who talked to Dr. Campbell, “Global Greening sounds good. In the long run, it’s terrible.”  Dr. Campbell gave four reasons why increased photosynthesis does not translate to an equivalent increase in crops (which he attributes instead to modern agriculture techniques like improved irrigation, fertilizers and seeds):

And it’s not the first time that climate deniers try to use scientific evidence to debunk global warming. They famously did this in 2011, deliberately misusing the findings of a highly respected scientist, Dr. Richard Alley, a glaciologist and climate scientist at Penn State and a longtime contributor to the Intergovernmental Panel on Climate Change:

This brings us back full circle to the real reason we are not able to tackle climate change: A lack of political will. A lack gleefully cultivated by climate deniers. One wonders though how it is possible to deny scientific evidence. By what twist of the mind is a person willing to overlook the role of science in building civilization – and worse, draw conclusions from scientific discoveries that are the opposite of what scientists themselves say? What drives such a person to pursue ends that, in the long run, can only cause human extinction?

But There is Hope

The Economist reports this week that “Republicans inch towards action on global warming”, warning that the “key is to avoid language of guilt and repentance for climate change”, and, in particular, a call for “doing with less” that “does not work well in the conservative community”.

According to a recent Pew research, a larger share of GOP Millennials believe in global warming than their elders, and overall, more Republicans believe in climate change than three years ago, 52% vs. 39%. A new GOP bill to tax carbon pollution has been launched, a first important step even if, for now, it is likely to fail in Congress. There are major Republican figures who do not deny climate change, for example, Miami’s mayor Carlos A. Gimenez, who, when he talks about rising sea levels says: “It’s not a theory. It’s a fact. We live it every day.” Bipartisan work is on the rise, like the Climate Solutions Caucus founded in 2016, that has currently 86 members evenly divided between House Republicans and Democrats.

Yes, there is hope. It is also reported that there are now a lot of organizations and NGO’s like the ones at https://thesolutionsproject.org/why-clean-energy/ that are taking steps and actions to combat climate change. Let’s all be part of this change.

Why Water holds the key to sustainable development

Why Water holds the key to sustainable development