Climate Emergency: Eight Stories That Could Make or Break the 2020 Decade 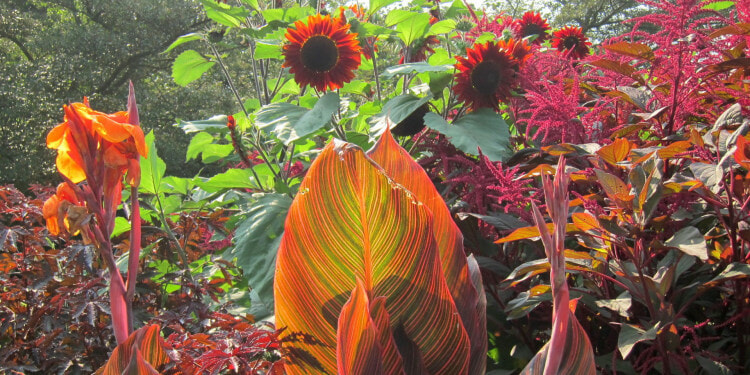 We are now in a climate emergency and 2020 will be a critical year in the fight for the survival of the planet. The battleground is triple: climate change, biodiversity, and the ocean. What happens in one affects the other two: 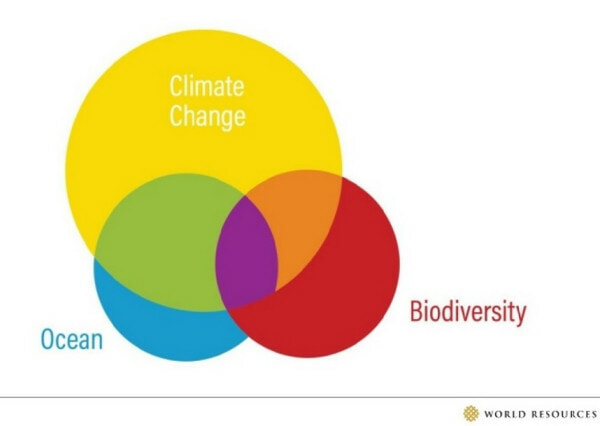 Three upcoming global events are key and five major actors – if they work together – could make the difference. Governments, businesses, finance, technology innovators and activist citizens will shape the trajectory for climate action and other environmental issues for the decade to come.

That is the message from Andrew Steer, World Resource Institute’s President and CEO, that he shared last week in a memorable presentation: Eight Stories to Watch in 2020 and a blog post: “Collective Action at the Crossroads: What to Watch in 2020“.

Now in its 17th year, Stories to Watch is a go-to event for policymakers, business executives, thought leaders, and media in Washington, DC, and around the world. What is remarkable about this year’s Stories to Watch is that in spite of the dire situation and the many culprits, there’s no finger-pointing. The culprits are not named.

This helps to strengthen the call for collective action. The main point of WRI’s presentation: Collective action will be the only way we can save the planet – and ourselves – from extinction.

WRI invites us to consider the situation.

If we continue with business-as-usual, the path we’ve been on throughout the 2010s, CO2 emissions in 2030 will lead to an inevitable catastrophe: 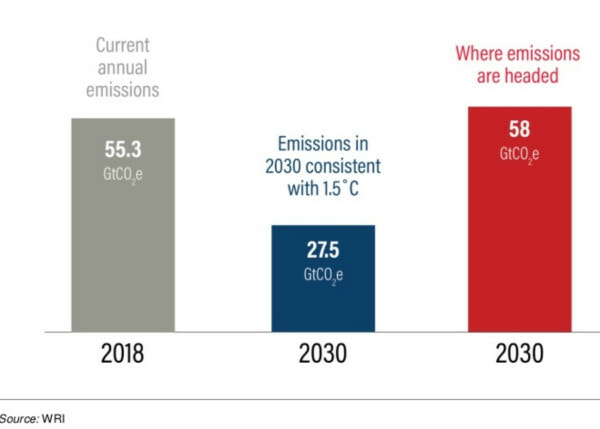 The 2010s have been a lost decade, we can’t afford another one.

Scientists are reporting that biodiversity loss is proceeding at 1,000 times the natural rate. Today a million species are threatened with extinction: Clearly, we are next.

There was a brief moment in 2015 when it looked like collective action could be rekindled, with the adoption of the Sustainable Development Goals and the Paris Climate Agreement.

But, as WRI President put it, “in the five years since, we’ve seen little willingness to compromise for the common good”. And he reminds us that the 20 Aichi Biodiversity Targets, set 10 years ago, have been a resounding failure. Indeed, at the Madrid climate conference in December 2019, negotiators couldn’t agree on a better time horizon, or on the basic rules for carbon markets or “on almost anything at all”.

What went wrong? The problems we are facing in a nutshell – as summarized by WRI:

This – putting “collective action” as a top issue – actually conveys a hopeful message, the scary battle of billionaires that we reported on notwithstanding. The billionaire battle shaping up in the coming decade has an outcome that is still uncertain. And there are more forces at work out there, including activist citizens. In WRI’s view, collective action between all those forces – from business to government to people – could make the difference.

Where and how will that “collective action” work out?

WRI sees it as “eight stories to watch”: The action will unfold in three key events in 2020 and be actuated by five actors.

Where: Three Key Events in 2020 to Address Ocean, Biodiversity and Climate Issues

These three events are defined by WRI as “key decision points”. 2020 is shaping up to be “a big year for the ocean, for biodiversity and nature, and for climate change.”

First, the Ocean:  2020 UN Ocean Summit, a Conference to be held in Portugal on June 2-6. We all know how badly oceans are overfished and polluted. In the lead up to this conference, a number of initiatives should be watched according to WRI, including from Business for Nature and the High-Level Panel on a Sustainable Ocean Economy. The hope is that the HLP report in particular, due out in June, can “create a new narrative” for a sustainable ocean economy.

But it does not stop there. Much more is to be discussed at the WTO in September, the Biodiversity COP in Kunming in October, and at the Climate COP in Glasgow – as expected, since these issues are all interwoven. 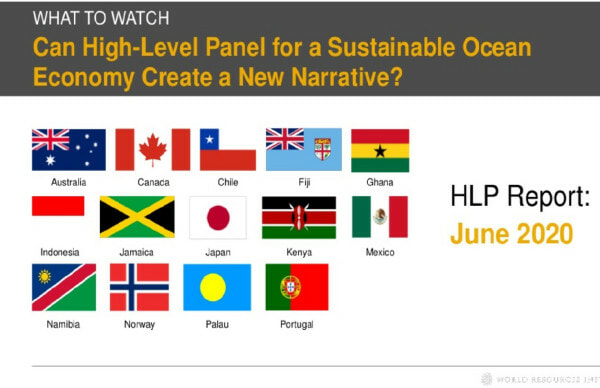 Second, biodiversity.  The Biodiversity COP will be held in Kunming, Yunnan, China in the final quarter of 2020. Preparatory work has already started, as the failing ailing Aichi targets urgently need to be replaced. The goal is to negotiate the 10-year targets and policies under the Convention on Biological Diversity to make them more accountable.

As WRI points out,  China’s role as host of the COP provides a golden opportunity for a possible acceleration: 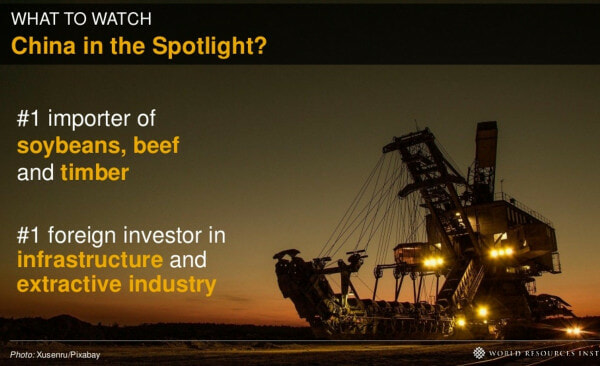 Third, the climate. The Climate COP will be held in Glasgow, the U.K.  from 9-19 November 2020. This is a crucial year in the COP cycle: Five years after the Paris Agreement, countries are required to “increase their ambition” – but the so-called “ commitments to move towards ‘net-zero’” could be problematic. Net-zero has not yet been formally defined. While it may be politically easier, but the WRI warns that care must be taken that it “does not substitute for more ambition in the 2020-2030 period, which is what is required now”, in particular:

Who: Five Actors Who Could Move the Needle in the On-going Climate Emergency

The five actors are leaders in governments, businesses, finance, technology and the “people”, i.e. active eco-conscious citizens committed to fighting climate change and other environmental issues. 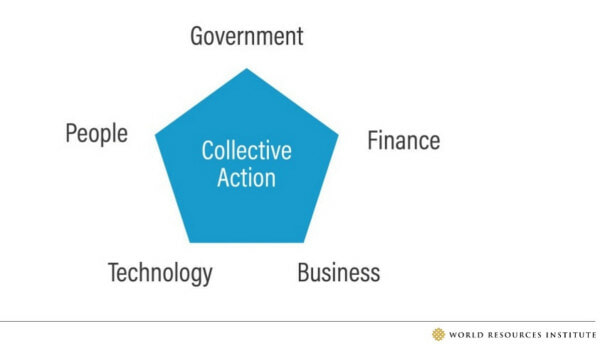 Government: In general, populist governments tend to be climate deniers, notably the case of Trump. In less than four years, the Trump administration has imposed 94 rollbacks in environmental protection regulations in the country, including canceling the Federal requirement of carrying out environmental impact evaluations on major infrastructure projects such as pipelines.

If Trump gets re-elected in November 2020 for another four years, the damage will be yet greater and the first thing that he will do is complete the process of U.S. withdrawal from the Paris Climate Agreement. In that case, who (if anyone) the U.S. will send to upcoming COP 26 is unclear. 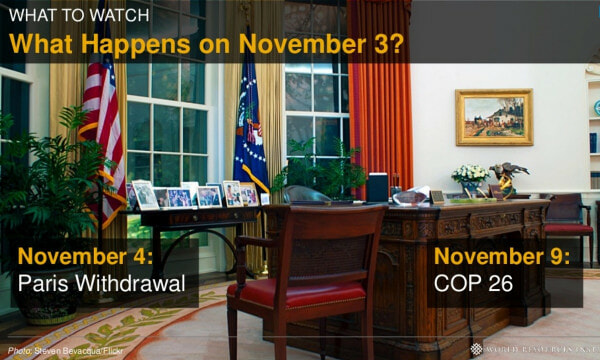 But not all governments have been so destructive. China has several times and in different fora announced its commitment to fighting climate change; recent reversals (like the return to higher coal use) appear to be a result of the economic slowdown caused by Trump’s trade war on China.

Furthermore, Green New Deals are forging ahead in several countries, even in the U.S. where it is promoted by several Democratic Party candidates. And parliaments in several countries have declared “climate emergency”, including the European Parliament.

On 14 January 2020,  the EU took another big step on the way to a climate-neutral economy, when the Commission presented its plan to mobilize one trillion euros ($1.1 trillion) over the next decade.

Finally, on the heels of the Yellow Jackets protests in France there is increased awareness that in fighting climate change there is a need to take into account the cost of transition on the poorer strata of the population wherever they are: 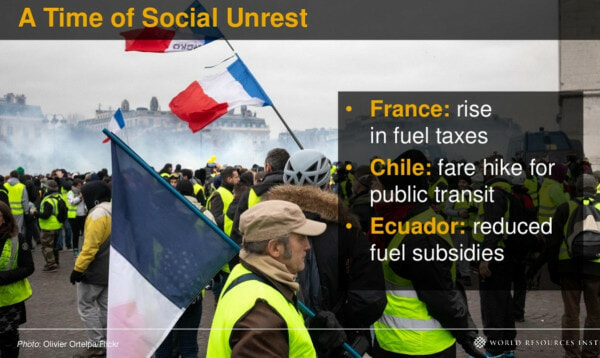 Business. A paradigm change is needed, a shift away from the fixation of maximizing shareholder values, which was the goal set by Milton Friedman and the Chicago Boys. With catastrophic results wherever free-market rules have been strictly applied, as we have seen in Latin America that has lost not one but two decades of growth.

As WRI’s President Andrew Steer noted, “The new economic narrative is beginning to take root in business schools and board rooms.” In August 2019, the Business Roundtable redefined its Statement of the purpose of a corporation, to serve “all Americans”, i.e. not just shareholders but all stakeholders, employees and consumers included.

More than 750 major corporations have committed to Science-Based Targets, and the number is growing. The hope is to reach 1000 as soon as possible. The only laggard (for now) is the U.S. Chamber of Commerce. 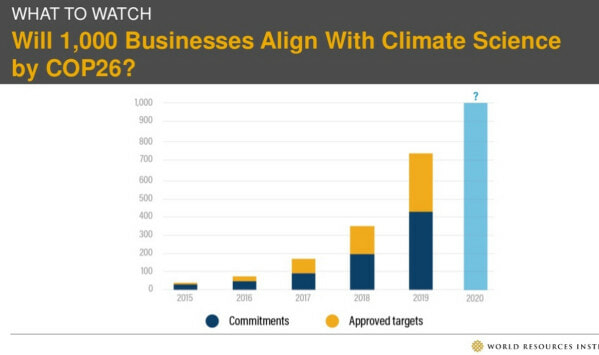 Finance. As climate change causes wildfires and increasing environmental damage everywhere, Andrew Steers notes that “change is thus being driven both by risk managers, including regulators and by asset owners and financial intermediaries who see profit opportunity as well as moral purpose.”

Initiatives for sustainable finance are numerous and involve institutional investors, central banks, regulators and even finance ministers who have gathered  in a coalition that has already attracted 55 members:

The Task Force on Climate-related Financial Disclosures (TCFD) is now the leading force for global voluntary standards, and it is expected that disclosure will become mandatory in key financial markets in the near future.

Technology. As anyone who has followed Impakter’s reports on innovation abating the damaging effects of climate change and environmental degradation knows, there is plenty of scope to feel optimistic. As WRI notes, tech “moves faster than you think” and innovations take ever less time to be adopted:

Encouragingly, the cost of decarbonization is a lot less than expected, just  0.5% of Global GDP. As WRI argues, it is also likely to be easier than expected to address the so-called “hard-to-abate sectors” – responsible for 30% of emissions, like cement, chemicals and steel and heavy transport including long-distance road transport, shipping, and aviation.

People. Here is the force that could move the needle, at last. The fight against climate change and environmental degradation started long ago – in 1962 with Carson’s bestseller Silent Spring, an incredibly courageous and effective attack by one woman scientist against the huge pesticide industry. Many people have followed in her footsteps and protests culminated in the early 1970s, leading to major environmental protection, first in the U.S. (for example, the establishment of the EPA by President Nixon). Since then, not much has happened.

Never before have so many young people marched around the world, led by Greta Thunberg and an array of new groups from the Extinction Rebellion to the Sunrise Movement. Everyone is joining in, including indigenous people, the ones who are closest and know best how to care for nature.

Impact of people’s actions, as highlighted by WRI, is already noticeable: Parliaments in 15 countries — ranging from France and the UK to Argentina, Bangladesh, and Canada — have declared states of “climate emergency,” and 18 countries have now committed to a path towards net-zero emissions. WRI calls on us to:

In conclusion, WRI offers an optimistic vision of our future. With collective action that triggers an “ambition loop” with all actors working together across sectors, outdoing and supporting each other, we could expect “more Denmarks”.

Denmark, Andrew Steer reminds us, is where all the major political parties recently agreed on a target to reduce emissions by 70% by 2030, and become carbon neutral before 2050. They may not know yet quite how they will achieve this, but they are following the precepts laid out by the Global Commission on the Economy and Climate’s report “the growth story of the 21st century.” As a result, Denmark’s economy will fundamentally shift to become a “strong, sustainable, inclusive economy” – not just one for shareholders and the One Percent (as is too often the case now).

“citizens will enjoy cleaner air, better transport, less waste, more green spaces, and the knowledge that they are leaders in the revolution to give our grandchildren a well-functioning Earth on which to prosper.”

WRI counts itself in, and so should we.

‘Green’ Investing: The Future of Business?

In Defense of Cows

In Defense of Cows