COP26: Can Rhetoric be Transformed into Action?

The next few days will set the tone for the upcoming negotiations at COP26, are leaders ready to make concessions to combat climate change? 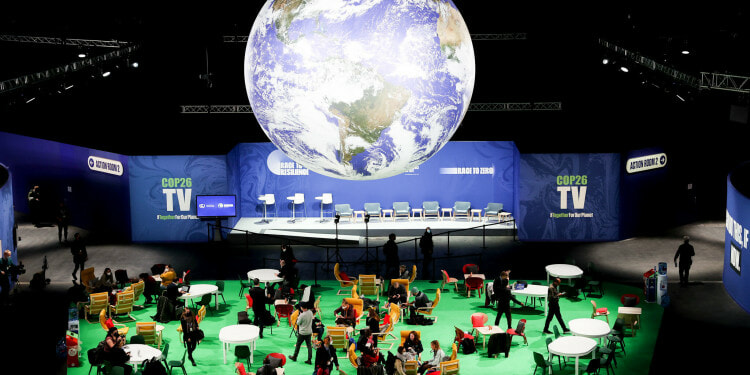 World leaders have officially arrived at the COP26 U.N. climate conference in Glasgow, Scotland. Around 120 leaders will be attending the long-awaited global climate talks, beginning with two days dedicated to speeches. Heads of states and governments will discuss what steps they plan to take to tackle climate change and will hopefully include new emissions-cutting pledges. These speeches will later be followed by technical negotiations to discuss how countries can enforce the 2015 Paris Accord rules.

The next few days will set the tone for the upcoming two weeks of negotiations, whereby most people hope to see ambitious pledges to further cut emission, to decarbonise, and greater efforts from developed countries to lock in billions in climate finance to help low-income countries to transition towards greener energy and technology, as well as aid them to deal with the impacts of climate change.

One minute to midnight…

COP26 is “our last best hope to keep 1.5° in reach” , announced COP26 President Alok Sharma in his opening speech, he hopes leaders can show that Glasgow will deliver where “Paris promised.” Speaking to 120 world leaders, he declares that “together, we can seize the enormous opportunities for green growth, for good green jobs, for cheaper, cleaner power.”

Prime Minister Boris Johnson of Britain was the first speaker, welcoming the guests to the World Leaders Summit. He announced, “humanity has long since rundown the clock on climate change, it is one minute to midnight on that clock, and we need to act now.”

Johnson describes the Doomsday clock to have begun when James Watt invented the steam engine 250 years ago in Scotland. He uses this example to refer to the West enriching itself through their own industrial revolutions which emitted an immense amount of greenhouse gas emissions. Invoking the need for developed countries to assume responsibility for climate change, as well as secure climate funding to help low-income countries currently bearing the burden of climate change’s impact.

History will judge us on what we achieve over the next two weeks.

Followed by Antonio Guterres, the UN’s Secretary General, announcing the “climate catastrophe” is caused by our “Our addiction to fossil fuels” which “is pushing humanity to the brink…We face a stark choice: Either we stop it – or it stops us. It’s time to say: enough.”

The opening ceremony and the first day of COP26 has begun but many remain unsure whether rhetoric can be transformed into clear actions. Greta Thunberg has launched an emergency appeal to highlight the importance of the Heads of States’ decision at this Summit.

“As citizens across the planet, we urge you to face up to the climate emergency. Not next year. Not next month. Now”

Join me and activists all over the world and demand leaders to face the climate crisis at #COP26
So far more than 650k people have signed!https://t.co/MJTQHx4FH0

Greta Thunberg has joined a protest in London ahead of COP26, where activists are demanding that banks stop approving financial loans to projects and companies that use fossil fuels.

G20 and its disappointing conclusions…

All eyes are on world leaders today. There is a special focus on the EU, the US, and China, for being the main culprits of climate change, and, more recently, for having failed to reach any sort of, or very few, concrete commitments at the G20 summit which ended as COP26 began.

The G20 summit, described as a “crash test” for COP26, showed disappointing conclusions. The G20 bloc, which includes Brazil, China, India, the EU, and the US, accounts for more than 80% of the world’s Gross Domestic Products (GDP), and greenhouse gas emissions. The Summit was important in setting the tone prior to COP26, from the perspective of the greatest polluters on the planet, in understanding their stance in the future of the 2015 Paris Agreement.

Related Articles: Are the United States Underprepared for COP26? | Is $100 Billion in Climate Finance Enough to Offset Climate Damage? | UK Environmental Agency Says ‘Adapt or Die’ Ahead of COP26

Nonetheless, it seemed the enduring climate rhetoric from several leaders were to remain as words, and it would take a longer fight to transform rhetoric into actions. Heads of State came together last week to discuss a myriad of issues, but the focus was largely on climate change.

In terms of decarbonisation, leaders agreed to change the language from reaching “net zero by 2050” to “by mid-century” as China does not believe it could go carbon neutral by 2060. An agreement was made to end international financing of coal fire power stations, but domestic ones still seem to not be an urgent problem. They ‘agreed’ to recognise methane as a greenhouse gas, but that’s about it. And lastly, leaders agreed to finance developing nations $100 billion to deal with climate change… something they already had agreed on in 2009.

It is fair to say, efforts at the G20 Summit were minimal. Maybe the Heads of State of the 20 largest world economies really believe that human-induced climate change can be resolved through fate rather than hardened policies and actions. As COP26 takes on momentum, it is important they demonstrate clear ambitions to finish the rules implemented in the 2015 Paris Agreement, as well as produce a clear plan to ensure there is enough Climate funding for every country.

My optimism wants to say yes, that there is hope for COP26. Boris Johnson, the British Prime Minister, announces he wants to see “the UK’s Green Industrial Revolution go global.”

Boris Johnson declared today, at COP26, that the UK has prepared a major funding package, launching the ‘Clean Green Initiative’ to help developing countries take advantage of green technology and grow their economies sustainably. It hopes to deliver £3 billion in climate financing over the next five years, including £200 million for a new Climate Innovation Facility. The facility will support the scale-up technologies to help communities deal with the impacts of climate change, such as drought-resistant agriculture and sustainable forestry, in markets where private investors have been reluctant to take on the risk alone.

Johnson has also announced a package of guarantees to multilateral development banks that will provide major boosts to investments in climate-related projects. Injecting £1.45 billion into new projects across Africa to help the country adapt to the impacts of climate change, and an additional £750 million will be unlocked for green projects across India, supporting clean and resilient infrastructure in sectors such as clean energy, transport, and urban development.

Although a closer analysis of these initiatives will be required, it is fair to say that the UK wants to present itself as a leader in Climate Change funding and development to help low-income countries. This may encourage other leaders to step up in delivering the $100 billion, and drive leaders to finance more than the bare minimum. Climate vulnerable countries are demanding that developed countries pay a “loss and damage” fee to compensate them for the spiralling cost of Climate Change.

The issues however go beyond inspiring developed countries to lend a helping hand to developing economies in the energy transition. It starts with what the developed countries should do at home. In this respect, the EU is coming to COP26 with an ambitious range of proposals, having already adopted a series of measures that are included in its Fit-for-55 climate plan that comes together with a new social climate fund designed to provide direct support to those hurt by the transition.

Meant to lead Europe’s transition to a greener future, it could serve as a model for the world. The big question, though, is whether the United States will – or can – follow through, as Biden’s ambitious investment plans that included support to green energies are frustrated at home by fierce Republican opposition.

And, putting a break on the whole process, are the eternal opposers, China, Russia and Saudi Arabia, the latter two firmly sitting on their oil and gas wells.

Can the UK and the EU break the deadlock single-handedly? Unquestionably, the matter is not only in the hands of governments, it is in our hands, all of us. And civil society has rushed to Glasgow in greater numbers than ever. Stay tuned for future developments.

Editor’s Note: The opinions expressed here by Impakter.com columnists are their own, not those of Impakter.com. — In the Featured Photo: COP26 begins in Glasgow, Scotland on Sunday 31 October. Featured Photo Credit: COP26.

Indigenous Resistance Has Averted 25% of US and Canadian Annual Emissions