Desert Locusts Unleash Mayhem in the Horn of Africa 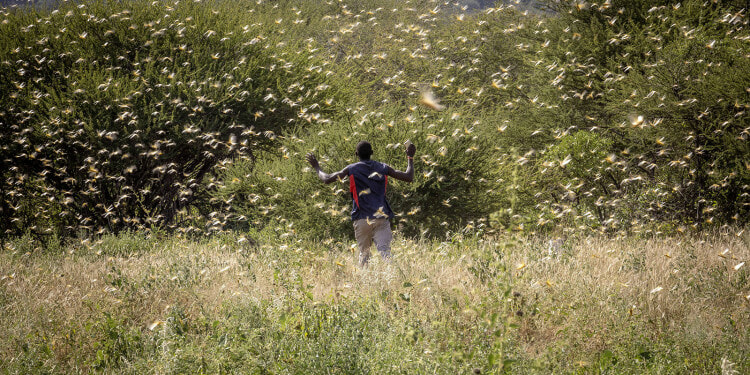 For over several millennia, swarms of desert locust (Schistocerca gregaria) have plagued Africa, the Middle East, and Asia. They are known to have affected the livelihoods of a tenth of the global population.

Farmers and community dwellers are helpless in combating these unwanted guests that have invaded and overran their fields, robbing them of their essential means of livelihoods.

Currently, the desert locusts are spreading and unleashing mayhem in the Horn of Africa. It is the worst in a decade. Their numbers are in hundreds of billions and their impact is devastating, devouring every green plant in view in a matter of hours. These age-long locusts are known to be the most destructive migratory pest in the world. Farmers and community dwellers are helpless in combating these unwanted guests that have invaded and overran their fields, robbing them of their essential means of livelihoods. The current upsurge presents an unprecedented threat to food security and livelihoods in Ethiopia, Kenya and Somalia.

The unusually heavy rains in the previous season came in two cyclones in May and October, making the lands conducive. This situation had triggered the rapid flushing of the vegetation in their habitual arid habitat, resulting in rapid breeding and a massive outbreak of this highly prolific, mobile and voracious pest.

Between 1930 and 1960 locust outbreaks were rampant, with upsurges reaching plague levels about 18 times. The period of 1965 to 2019 is regarded as a “recession” when plagues were generally low. Like a sleeping giant awakened the gregarious locusts are unleashing their destructive mayhem on seven countries in Africa, initially, now tearing their way across East Africa, albeit with varying intensities.

The current outbreak is the worst in seven decades in Kenya, and in 25 years in Ethiopia. Somalia has recently declared a national emergency, second after Pakistan. As of Feb. 17, 2020, FAO’s Locust Watch has reported, the widespread desert locust infestations and a new generation of breeding threatens food security and livelihoods in the region, with extremely alarming situations in Kenya, Ethiopia and Somalia (after having devoured Eritrea and Djibouti), but less alarming in Uganda and Tanzania. Cross-border swarm movements between Ethiopia and Kenya are reported to have continued. The breeding of these ravenous locusts has been reported to progress on both sides of the Red Sea in Egypt, Sudan, Eritrea, Saudi Arabia and Eritrea; and in the southeast coast of Iran. These may cause swarms shortly. With the raining season approaching in the East Africa region, countries are racing against odds to avert impending humanitarian crises.

What Is the Extent of the Current Threat?

As the name implies, the desert locusts’ natural habitat are the deserts, but they are highly mobile and gregarious. Desert locusts normally lay their eggs in moist soils to avoid drying up in these dry environments. They often seize every opportunity if it rains heavily to bury massive numbers of their eggs in the soil, as much as 1,000 per square meter. As soon as it rains the eggs hatch and descend upon their vegetation as they grow. Within a short time, they would have overcrowded the vegetation and become compelled to hop and fly to neighboring vegetations until these can no longer sustain them. At that point they would have grown strong to fly, and off they go in swarms, migrating to better territories and landscapes for food.

The storm in May 2018 alone supplied enough rains for two generations of ravenous locust swarms. According to Keith Kressman (FAO), this exponential increase of about 20-fold for each generation is such that after two generations of three months each locust desert has increased about 400-fold! Worse still, the October rains poured plenty enough to have supported several months of breeding. It has been estimated that the situation could worsen as breeding of desert locusts could explode by a factor of 500, if conditions become favorable and its multiplication is unchecked. The hard truth is that while all the breeding was happening in these remote locations in the desert, it evaded monitoring. Kressman puts this so vividly, “Nobody knew what was going on because this was just in one of the most remote places on this earth.”

Scientist have shown that desert locusts also transform their bodies to adapt to this mobile lifestyle and harsh environments. This includes changing their colors from yellow to black, gaining more muscle mass, increasing heat tolerance and adapting their ability to eat toxic plants. The worrisome is the preference for human food — grains, carbohydrate-rich, protein-rich vegetation, and staple human diets as food.

It is difficult to precisely estimate the costs of losses by desert locusts, and their control can be very costly. The potential for destruction is enormous. A major surge in 2003-05 in West Africa was reported to have cost US $2.5 billion in harvest losses. A small locust swarm can contain as much as 40 million locusts. A swarm can destroy enough crops to feed 2,500 people for one year. Each square kilometer devoured by the desert locust is equivalent to enough food to feed 35,000 people. They eat 1.8 tons of vegetation across 350 square kilometres.

[A] single desert locust swarm the size of Brussels could consume Belgium’s entire food supply in a single day. And they could travel as far as 150 kilometer in one day, consuming food equal to their live weight.

According to a recent article, a single swarm in northeast Kenya was estimated to have covered about 2,400 square kilometres, containing hundreds of billions of locusts. Kressman noted that a single desert locust swarm the size of Brussels could consume Belgium’s entire food supply in a single day. And they could travel as far as 150 kilometer in one day, consuming food equal to their live weight. It is not only about farmers — the primary victims of this pest, but also all those who relied on farm and off-farm products and services — producers, harvesters, post-harvest workers, transporters and marketeers! Unless something is done quickly, tens of millions of farmers and producers along the value chain will continue to be rendered vulnerable.

Measures to prevent locusts from spreading to a particular area are possible, but complete eradication of the pest is still like chasing a mirage. The most effective control is the use of pesticides, which can be sprayed from the land, vehicles or aerial spray by airplanes, helicopters or drones. This method can cover a large area in relatively short periods of time. FAO is already working closely with local and national governments and partners, supporting surveillance and control operations and initiating efforts to safeguard livelihoods and assist in the longer-term recovery and resilience of those affected. Besides, it is high time to update national policies and infrastructure early warning system, and explore integrated approaches to build livelihood resilience of producers, including strengthening social protection and farmer insurance, and exploring alternative uses of locusts as food and feed sources at scale.

However, there is need to urgently up-scale these intensive ground and aerial control operations, especially to detect and reduce the locust numbers before they spread any further. This end, FAO called for estimated US $76 million in January, to help scale up efforts to urgently combat the rapid spread of this pest. But as more countries have been affected and the scale of need in affected areas became clearer, the cost has nearly doubled to US $138 million. So far, the international community has responded with a pledge of US $ 52 million to date, and this is much appreciated. There is still is large funding gap.

The Africa Solidarity Trust Fund (ASTF) is an innovative Africa-led Fund which supports African development initiatives and is uniquely positioned to reinforce the capacities of affected African countries to combat the locust. The ASTF has been providing catalytic and ﬂexible funding to support Africa-to-Africa initiatives on food and agriculture systems, at the regional and country level.

The ASTF’s latest donation of US $1 million to reinforce capacity to combat desert locust in East Africa follows similar action by the Fund in the wake of the outbreak of the Ebola disease in West Africa some years ago. At the time, ASTF allocated US $1.5 million to support rapid-intervention projects in three countries affected by Ebola (Guinea, Liberia, and Sierra Leone). ASTF has also funded projects that control the tomato leaf miner (Tuta absoluta) and Fall Armyworm in southern Africa. ASTF has benefited hundreds of thousands of family farmers, women and youth in 41 African countries by supporting a wide variety of projects that help boost rural employment opportunities, increase agricultural production, generate new income streams and build resilience.

In order to be better prepared for emergencies that could offset all other investments made in agriculture in African countries, especially regions already prone to vagaries of climatic and natural disasters, flood and droughts extremes, let alone transboundary pests and diseases, the ASTF remains an effective mechanism for channeling flexible pooled funds that can be deployed rapidly to combat these threats.

Editor’s Note: The opinions expressed here by Impakter.com columnists are their own, not those of Impakter.com — In the Featured Photo: 22 January 2020, Samburu County, Ololokwe, Kenya – A man walks through a locust swarm in Kenya. The United Nations Food and Agriculture Organization (FAO) warned that the desert locust swarms that have already reached Somalia, Kenya and Ethiopia could spill over into more countries in East Africa destroying hundreds of thousands of acres of crops — Featured Photo Credit: ©FAO/Sven Torfinn

COVID-19: If it Turns into a Global Pandemic

Dr. Festus Akinnifesi is the Executive Coordinator of Multipartner Initiatives, Resource Mobilization and Private Partnerships Division (PSR) at the Food and Agriculture Organization of the United Nations (FAO), Rome, Italy. He was previously the FAO’s Deputy Strategic Programme Leader on Sustinable Agriculture. Before joining the Strategic Programme, he was Chief of FAO’s South-South Cooperation. He had a long and distinguished career at the World Agroforestry Centre (ICRAF), as formerly Principal Scientist and Regional Director for Southern Africa. 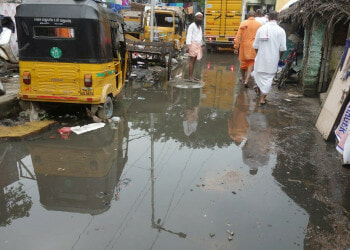 COVID-19: If it Turns into a Global Pandemic