#EndSARS: The Truth Behind the Hashtag 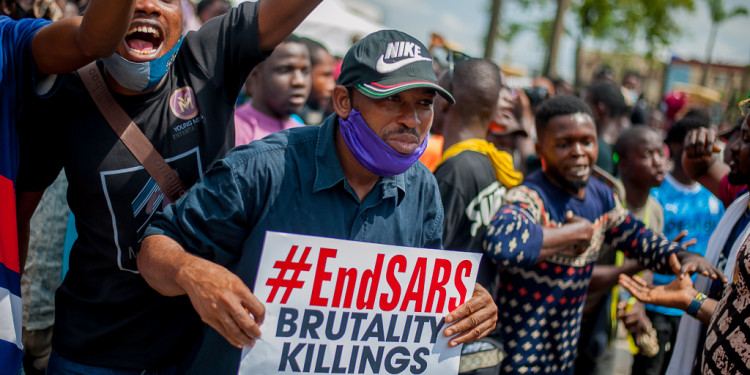 People across Nigeria and beyond have taken to the streets in a show of popular anger against police brutality. For nearly two weeks, protestors have voiced their outrage against the country’s Special Anti-Robbery Squad (SARS), which they accuse of massive human rights abuses and corruption.

The nationwide protests took on a global dimension after the #EndSARS hashtag went viral, morphing from a movement focused on disbanding the police unit into a wider call for change — encompassing poor governance, social discontent, corruption and security issues.

According to the eminent Nigerian newspaper editor Mannir Dan Ali, criminal elements have hijacked the protests, triggering an even bigger crisis. Speaking from the capital Abuja, he said:

The noble cause of #EndSARS has descended into anarchy. Malls have been burned down, police stations have been attacked, arms have been stolen and bodies of policemen have been burned beyond recognition. The protests have now become an excuse for local hoodlums to unleash mayhem.

But who really are SARS and why have they provoked so much anger?

SARS was established in 1992 to tackle violent crimes such as kidnapping, armed robbery and theft. But the group quickly became controversial for its links to extrajudicial killings, torture, arbitrary arrests and other illegal activities.

For years, global organizations such as Amnesty International have reported human rights abuses allegedly committed by the group. Their June 2020 report documented 82 cases of ill-treatment, torture and extra-judicial killings orchestrated by SARS between January 2017 and May 2020. According to Amnesty, the group targets, “Young men with dreadlocks, ripped jeans, tattoos, flashy cars or expensive gadgets.”

The current protests were sparked by a video circulating on social media which allegedly showed the unprovoked killing of a man by SARS officers in Ughelli, a town in southern Delta State. The authorities initially denied the incident, arresting the man who had originally shared the video.

SARS just shot a young boy dead at Ughelli, Delta state as we speak. In front of Wetland hotels. They left him for dead on the road side and drove away with the deceased Lexus jeep.

Outraged Nigerians took to their online platforms, sharing videos, photos and stories of SARS brutality with the hashtag #EndSARS, which is now the slogan for this organic movement that is galvanising people across the country. The events were documented in real-time as the protestors shared with the rest of the world live videos of peaceful demonstrations and evidence of further police harassment. The impact of social media in the #EndSARS movement follows a wider global trend of protests, including the Arab Spring, Black Lives Matter (#BLM) and #oromoprotests in Ethiopia which led to the resignation of the country’s leader Hailemariam Desalegn in 2018.

Related Articles: Why Serbia Is Protesting | Protests in Iran and the Reasons Behind Them

In light of the protests, President of Nigeria Muhammadu Buhari announced the disbandment of SARS on Oct. 11, 2020. Pledging that “all those responsible for misconduct” would be “brought to justice,” the president introduced the development of a new Special Weapons and Tactics Unit, SWAT. None of the former SARS officers are eligible to join SWAT and the International Committee of the Red Cross is in line to train the unit on police conduct, humanitarian law, human rights, and detention.

This gesture did not appease the protesters who believe SWAT could simply become a rebranded version of SARS and fear that former SARS officers will be redeployed within Nigeria’s police system. Given the recurring cycle unfulfilled government pledges in Nigeria, the response is hardly surprising.

The government has already promised to inquire into, reform and disband SARS on numerous occasions in the past, including in 2017 and 2018. According to Osai Ojigho, Amnesty International’s Nigeria director, government actions “fall short of demands for accountability and justice for abuses committed by the unit.”

This sentiment is shared by many protestors whose anger seems only to have intensified, especially after the large-scale deployment of anti-riot police across Nigeria and a 24-hour curfew imposed in the states of Lagos and Edo.

The prevailing demands of the protestors include:

Whilst the authorities maintain that anti-riot police have been ordered to “identify and isolate” criminals from peaceful protesters, the recent alleged shooting by security forces in the Lekki district of Lagos appears to compound protestors’ views of police misconduct.

Here is what an unnamed protestor told the BBC:

They opened fire, without warning, directly … at us…. we lost about twenty people on the ground…about fifty got injured…We have pictures, videos, it was the Nigerian army. You can go online with the hashtag #EndSARS and you’ll see everything. It was planned… premeditated, they wanted to kill us.

Another disturbing account of the incident similarly hints at premeditation: “CCTV cameras were removed in the afternoon and lights were switched off at the Lekki toll gate at about 6 pm where we were protesting.”

The same thing that started the protest/unrest in Nigeria is what these @PoliceNG officers are still doing in Iyanya Abuja.
#EndSARS protest. #EndBadGoveranceInNigeria #EndPoliceBrutalityinNigeria pic.twitter.com/S1LyBIb0dA

It isn’t yet clear how many were injured or killed at Lekki but social media shows videos and images which claim to show the military shooting and protesters dispersing in panic. Amnesty International stated that at least 15 people have been killed since the protests began but the outpouring of images and videos on social media highlights that there could in fact be many more. Trying to get any reliable statistics on casualties seems next to impossible.

The movement has spread internationally, with #EndSARS protests taking place in Canada, the U.K. and the U.S. Adedokun Adeyemi, one of coordinators of the #EndSARS protest in Bristol, explained what had stimulated him to organise the march:

The government tried to shut down social media in Nigeria…One of Nigeria’s largest network providers sent out a message saying they had a connection problem, because protesters had destroyed their masts… But I see what is happening, and I see it live, largely through Facebook and Instagram. The government needs to know that the world is watching.

However, Mr. Dan Ali warned of the dangers of fake news in inflaming social conflict, “We must be aware of social media and misinformation.”

Nigeria’s protests are being held against a backdrop of negative sentiment in the country, aggravated by the poor state of the economy and the country’s failing political system. Unemployment appears to be one of the main issues facing Nigerians, with the lack of job opportunities especially concerning for young people. For those aged 15 to 35, the figures are alarming: 55.4% are jobless. Complaints about government corruption are also an established grievance. A 2018 Pew Research Center survey disclosed that approximately seven in ten Nigerians believe the statement “most politicians are corrupt” describes their government well, and six in ten say it describes it “very well.”

The outcome of the #ENDSARS movement remains ambiguous. Of the demands set by the protestors, the following have been met:

But as fundamental demands remain unresolved, we are yet to hear of compensation, or justice, for victims of police brutality and their families. Since past promises to reform the security services have not been met, it is questionable whether this one will. But with the global attention these protests triggered, could the outcome be different?

This All-Women Cooperative is Feeding Hundreds During the Pandemic

I have a deep interest in African history and current affairs. This is compounded by my Angolan nationality and the extensive traveling I have done within the continent. I have a BA in Hispanic studies from the University of Bristol. My interest in Latin American culture and politics was intensified by the time I spent working for a Colombian NGO and an Argentinian radio station.