Successfully Countering Hate and Far-Right Propaganda: The story of EXIT-Germany 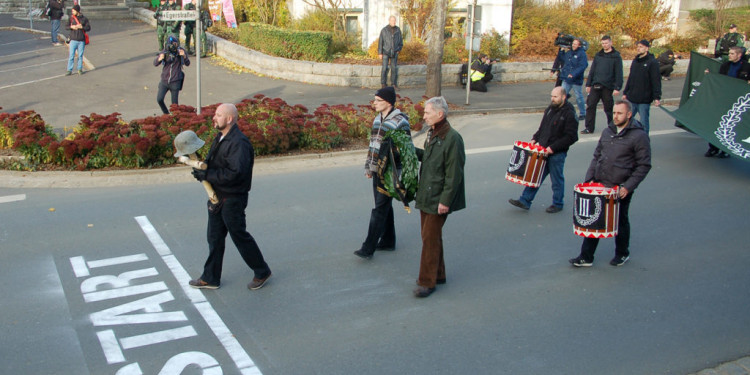 Editor Note: This article was shared with us by Fabian Wichmann. Fabian works for the ZDK Gesellschaft Demokratische Kultur gGmbH in Berlin. There he gives his support as a member of the EXIT-Germany team, to those who want to leave far-right movements.

He is also the author of several publications and studies on the topics of right-wing extremism and threats to democracy and the initiator of the award-winning initiatives “Rechts gegen Rechts” and #HassHilft.

EXIT-Germany is an initiative assisting individuals, who want to leave the extreme right-wing movement and start a new life. It was founded by criminologist and former police detective Bernd Wagner and former neo-Nazi leader Ingo Hasselbach.

We collaborate with great partners and trial new techniques in countering propaganda and demonstrations of the far right. Below we detail some of the group’s experiences:

In many places, neo-Nazis hold regular marches through towns and municipalities: one example is an annual march held in the small city of Wunsiedel in Upper Franconia, Germany. Despite the numerous protests by citizens and complaints in front of the German Federal Constitutional Court, neo-Nazis use the town over and over again as “a place of pilgrimage”. Until 2011, the grave of Hitler’s deputy, Rudolf Hess, was located there. These commemorative marches became a firm fixture of the right-wing scene. Local people’s reactions to these demonstrations are well known and expected by those organizing marches. In particular, the idea of a violent escalation is part of the strategy of the neo-Nazi demonstrations.

Faced with this situation, it was a matter of considering how we could mobilize a counter-protest which is not aggressive, but active, provocative and makes a clear statement. It was important to develop an approach which targeted the idea of the demonstration and created a new and bigger narrative. In this context, irony, absurdity and humor are the resources that allow us to portray serious circumstances in a different way and build a bridge to activate creative counter-protest. 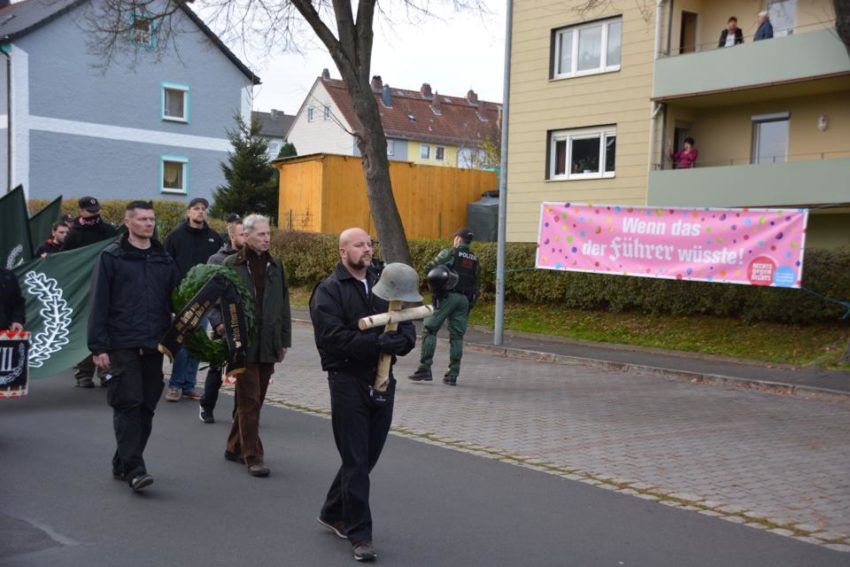 IN THE PHOTO:   A neo-Nazi march passing in front of a banner of EXIT-Germany. PHOTO CREDIT: Exit-Germany

Nazis against Nazis, Germany’s most involuntary charity walk, is a form of counter-protest against neo-Nazi demonstrations. The idea is simple: with every step of their march, the demonstrators unlock funds raised against their ideals – funds we previously had to raise. The idea behind this is based on a subversion of the demonstration’s real purpose: if one cannot legally prevent them from demonstrating, one should let them go, but repurpose their mission, for example, to raise funds against one’s own cause. The idea throws the demonstrators into a dilemma: either abandon the demonstration or go ahead in the knowledge that you are raising money for an organization which is working against right-wing extremism. The demonstrators thus become opponents of their own demonstration and we help those who are normally targeted by those extremist groups via the donations raised. At the end, the narrative of the demonstrators is satirically and peacefully counteracted.

This activity was implemented for the first time on 15 November 2014 in Wunsiedel. For every meter the demonstrators walked, they involuntarily released €10 for EXIT-Germany. The route of the demonstration was decorated with posters and banners which referred ironically to the activity, in order to motivate the demonstrators. For example: “If only the Führer knew.” On the road, we clearly marked the amounts that were raised at each respective stage. Various media outlets reported about the protest as well. The originally-provided donation sum of €10,000 was almost doubled during the march. After Wunsiedel, other cities in Germany, Sweden and Norway followed the same principle. Now, more than €47,000 has been donated, on projects for refugees and for right-wing extremism prevention. 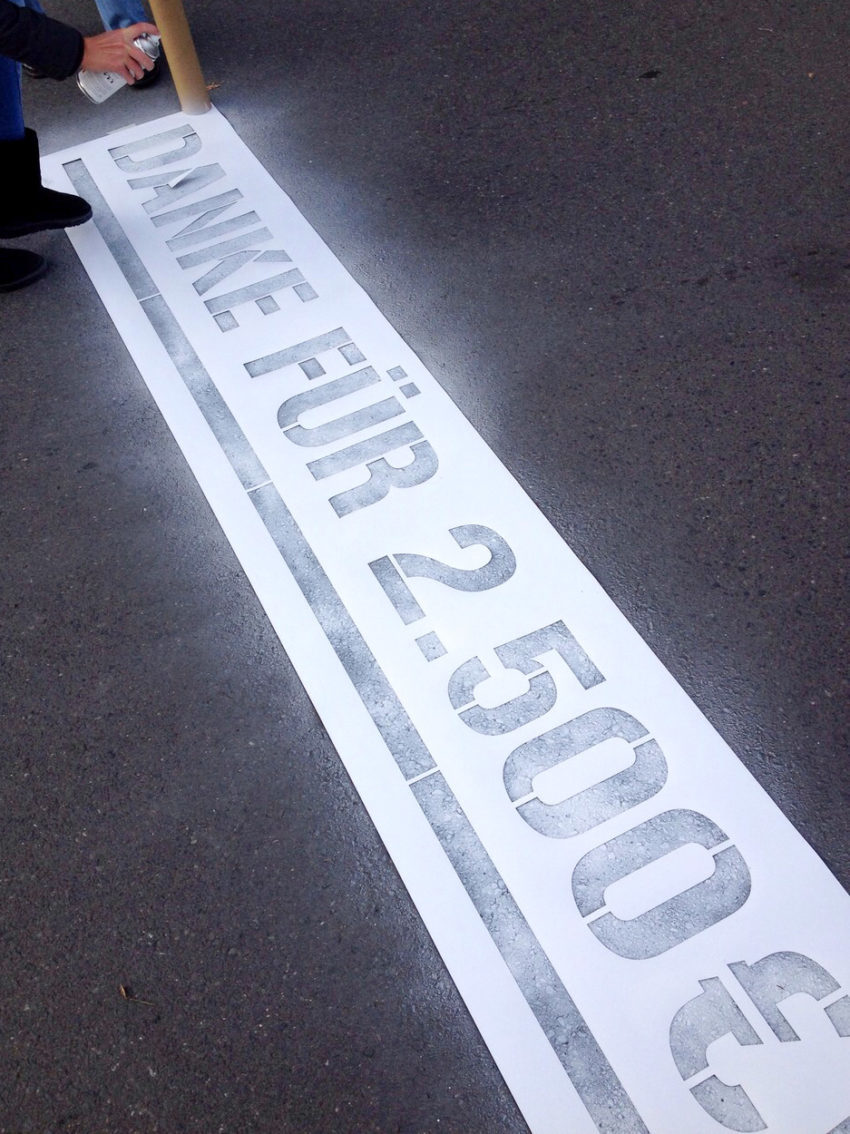 IN THE PHOTO:  The mark of the 2,500 Euro donated by the neo-nazi-involuntary-donors marching. PHOTO CREDIT: Exit-Germany

Donate the hate – let them donate for their hate

In today’s digitally-driven, social media-dominated age, countering extremists like neo-Nazis and white supremacists requires more than just ground fighting. In fact, some would argue that the majority of these groups coordinate their efforts online. So how does one combat right-wing extremism in the digital space? Our new idea is the digital continuation of the “Nazis against Nazis” initiative.

This idea was launched under the ironic motto ‘Hass Hilft’, which translates to ‘Donate the Hate’. Because in this case, hate actually does help! Various partners and countless users make it possible for us to transform hate speech on Facebook into involuntary donations against Nazi causes. One euro from the money provided from our supporters is donated to every discovered hateful post. Namely for an organization which helps refugees and EXIT-Germany. The more hatred, the more donations.

Now there is again a dilemma: either stop making xenophobic comments, or with every single post we collect money against xenophobic interests.

With a special tool we convert these hateful posts into donations. On our homepage it is possible to see the latest hateful comments and the actual donations. It is also possible to see who are the most “keen haters” in a top ten list.

On our Facebook page users can get in touch with us and support this action with donations or by submitting examples of the hateful comments they come across online. After one and a half years, we received several awards for our activities, and by June 2018 more than €70,000 in donations had been collected.

‘Operation Trojan T-Shirt’ evolved in cooperation with an ad agency and sought to target the neo-Nazi scene directly. On 6 August 2011 we distributed T-shirts for free, showing a skull with the text ‘Hardcore Rebels’ at a right-wing rock festival (‘Rock for Germany’) in the city of Gera, which was organized by the nationalist party, NPD.

The surprise effect became visible after the T-shirt was washed once. Our message appeared: ‘What your T-shirt can do, you also can do – We help you to free yourself from right-wing extremism. EXIT-Germany’. The goal was to increase the awareness and popularity of EXIT-Germany in the scene and particularly to target the youths that have not yet firmly settled in the right-wing extremist scene.

We are very well aware of the fact that this project does not have an immediate effect, however after the operation the number of persons contacting EXIT and asking for help to leave the movement tripled. In addition, when thinking about leaving the scene, a right-wing extremist might remember us later on.

IN THE PHOTO:  The shirt created by EXIT Germany with a hidden message. PHOTO CREDIT: Exit-Germany

Rewrite the rules instead of playing along

The described actions have one thing in common: they convey the offer of EXIT, to leave the far-right scene in a light and witty manner. By using a humorous approach directly to the targeted audience, they raise awareness about these problems and show that those topics should still be debated by the public opinion. Through this form of satirical communication, the marchers’ known communication forms and behavioral forms were broken and the presentation or the hate was cancelled out.

For example, the narrative of the demonstrators in Wunsiedel was disrupted by our activity and reconstructed into a new narrative: our narrative of involuntary donation.

The described examples feed off communication and interaction. It is important to know the target audience, to analyze them, to know about the specific spelling, symbolism or codes and to use this for a new narrative that works.

“Rewrite the rules instead of playing along” is to be taken literally in this sense to generate intrigue in the target audience and put them into a situation of confusion and uncertainty. Instead, tackle the issue on a personal level. Use this as a moment to show them that while you may not respect the values of their organization, you recognize them as an individual with their own set of struggles and will not dismiss them entirely as a result.

But even with all this money raised and attention from prank charity marches, the T-shirt and social media trolling, how does one change the hearts and minds of those invested in right-wing extremist causes in the long term?

This brings us back to the important point ― empathy. How do we make those shows of compassion more tangible? In order to ensure our little efforts hold weight, those leaving extremist groups need to be aware that they have a place in society if they choose to take it, that there’s a chance to actually change if they want to. And there are organizations willing to help them.

In the end, you also need inspiration, some luck and dedicated people.

Dangerous Times for Democracy: Why Italy is Key

Fabian Wichmann works for the ZDK Gesellschaft Demokratische Kultur gGmbH in Berlin. There he gives exit support as a member of the EXIT Germany team, for people who want to leave the far-right and is responsible for social media management. He is also the author of several publications and studies on the topics of right-wing extremism and threats to democracy and the initiator of the award-winning initiatives "Rechts gegen Rechts" and #HassHilft.