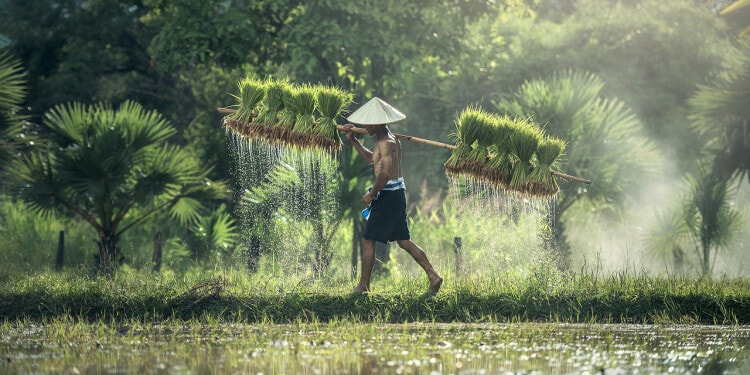 From the 26-28th of June representatives of over 100 countries and regions met in Rome for three days of talks. The pre-Summit would serve as a prelude to the main UN Food Systems Summit taking place in September.

This event is part of a renewed appetite in the UN for sweeping systemic change in the way food is produced, distributed, and consumed. It is clear that doing this is essential if the UN are to meet their 17 Sustainable Development Goals (SDGs) by 2030.

Deciding how this is going to be done is the role of the summit this year. Representatives of farmers unions, agricultural organisations, and youth were present alongside princes and presidents as stakeholders in this global system, and with a voice to contribute about its future.

But over the three days of talks an unresolved tension between two broad approaches became clear. As Lauren Baker, Senior Director of Programs at the Global Alliance for the Future of Food, said:

‘I was left thinking that it was a tale of two summits. One focussed toward these export markets, toward global supply chains, toward technology and digitisation, this neutral idea of innovation and technology, and the other summit was another set of voices talking about inclusion and participation, ecological approaches and paradigm shifts, a new way of thinking about food.’

On one hand you have top-down tech solutions focussed on integration and digitisation, and on the other you have producers calling for a greater stake in the system, an approach based on the principles of agroecology, and a shift towards seeing food as a human right and not a commodity.

In many ways the rest of the summit struggled to convincingly build on two basic observations. One: the problem is very bad. Two: this meeting is very important.

At the opening meeting in the Plenary Hall the Italian Prime Minister Mario Draghi said ‘we must act with determination’. Prince Charles informed the audience that ‘how we produce, market and consume food has a big impact’. As representative after representative took to the stage and spoke for their few minutes, any information communicated beyond this was almost an unbelievable gift.

But this was not always the case. In the science and innovation session big ideas were thrown around: greater investment in cultivated meat-replacements, biofertilizers, ‘a more precise targeting of the needs of consumers’, greater use of digitisation and genomics in producing food. All things we might have expected to hear and nod our heads to in agreement.

In the opening session, however, Elizabeth Nsimadala, the president of the Pan-Africa Farmers Organisation, spoke courageously to the assembly: ‘I want to make one thing clear. That you’re all here as consumers.’

Speaking with the powerful voice of developing world producers — among the most food-insecure and malnourished demographics in the world — Ms. Nsimadala directly addressed the imbalance at the core of the problem: the enormous and crippling inequalities in the value-chain of food systems.

Her pledge was simple:  ‘We have a commitment and we have a responsibility to offer everyone nutritious, safe, healthy diets. […] But we have a few asks […] We expect dignity. We expect equity. We want the rebalancing of power, so that we can share the losses and the benefits.’

As producers we are not problems, but we are the solutions you are looking for to have sustainable food systems.

The tension between top-down and bottom-up solutions was one that ran through the summit. The challenge remains, as Ms. Baker says:

‘How do we build these ladders and linkages between farmers associations and indigenous peoples associations into these global policy making processes in really truly inclusive ways?’

‘I think the next two months as we head into the summit will be really critical for that. How is the summit secretariat going to build on these fundamental principles of inclusion, participation with acknowledgment of power and access, all of these broader things that speak to broader structural issues in the food system?’

Critics of the summit do not believe this will happen. In fact it has been criticised for its focus on technological solutions and markets, and for sidelining issues of human rights and the discourses of food sovereignty.

The most damaging result from these accusations has been the boycotting of the  World Food Security Committee (CFS) by civil society, one of the two mechanisms of the CFS designed to open it to the world at large, beyond government delegates  – the other is the private sector, mainly corporate business.  As a result it feels that the summit risks not being serious about multilateral, private organisations of food supplies. Instead, it looks like a move to entrench corporate control of the agri-food sector that currently exploits so many, and at such cost to the planet. In short, there is a very real concern that this summit might enable some global business corporations to grasp control of the sustainable food revolution narrative.

RELATED ARTICLES: Fight Food Systems Failures and Famine: The Four “Fs” | How Local Governments Can Put Food on the Table: An Interview with Peter Defranceschi

Efforts to integrate small farmers into the global value-chain have long been pursued as a ‘solution’ to rural poverty. After the 2008 High Level Conference on World Food Security carried out by the FAO (the Food and Agricultural Organisation of the UN), on-the-ground organisations like AGRA (the Alliance for a Green Revolution in Africa) set up an infrastructure of 10,000 agro-dealers integrating small-scale farmers into value-chains, starting with agro-inputs (seeds, fertilizer, and pesticides) up to  contracts for delivery of produce to corporate processors and retailers.

Such tactics, some argue, have spectacularly failed over the decade since the 2008 High Level Conference on World Food Security . Primary producers remain poverty-stricken and desperate: as the Equal Times reported this week, today, ‘41 million people face imminent famine, 811 million people go to bed hungry every night. Over two billion adults suffer from malnutrition and adult obesity is increasing in every region of the world.’

True Cost Accounting, for Ms. Baker, will be important to help prevent this. This is a new way to assess food systems, ‘a holistic evaluation of our decision making.We do need ways to evaluate new technologies and assess their impacts on culture and communities, on our social fabric. We need to balance that with environmental impacts and with economic opportunities.’

She added, ‘There will be winners and losers in this, especially as the industrial food system is taken to account for their negative impacts and the externalities that they’ve been surfing upon for so long. This is why we’re seeing heightened tensions and dynamics around this, and in a way that’s positive.’

It did often seem, however, as if this new ethos of inclusivity was mere rhetoric. For example, one speaker at the science and innovation forum, who was speaking about the transition to a ‘circular bio-economy’ (unclear how this is different from just more reusing and recycling), notedthe transition would be ‘mainly a political process with winners and losers, which involves choices, consensus, as well as compromise’. Then they proceeded to add that in this political process ‘All the stakeholders must be involved and proactive […] It must be a community bottom-up process […] The changes must be first cultural.’

Nobody can disagree that everyone should be involved; that it will be a political process involving compromise among leaders, resulting in winners and losers; but it will also need to involve all the stakeholders so that the process is bottom-up, cultural, and spontaneous. These two approaches are incredibly difficult, if not impossible, to combine in practice.

"It is a shame that we have one single child going to bed hungry – let alone dying of hunger at a rate of one every five, six seconds."

Moreover, it is hopeless to expect proaction towards sustainable systemic change from stakeholders when they are starving. Simply ‘raising awareness, communication and education’ will not work when the stakeholders often have such a small stake in the system you are trying to convince them to help.

Dr Ishmael Sunga, the CEO of the Southern African Confederation of Agricultural Union spoke to this: ‘At the core of this problem is really the inequities that exist in the distribution of risk.’

At the core of this problem is really the inequities that exist in the distribution of risk.

As small-hold farmers bear the intolerable financial burden of a crop ruined by poor weather, they have almost no incentive to improve or change their farming practices to become more sustainable. They are, Dr. Sunga said, ‘grappling with the very basic fundamentals of life.’

It was heartening to hear this spoken of at the summit. Ms. Baker pointed out that this global dialogue was important in terms of what problems it helped to identify: ‘Asking questions about political economy, asking questions about indigenous rights, and what needs to be at the foundation of our food systems.’

Clearly, this summit will be a significant event in the trajectory of food systems in the next decade. Expect things to happen as a result of this summit even though the outlook is not bright. Yet to make progress, the Summit will need to both avoid a corporate takeover and open up to all stakeholders equally. This would appear to be essential if the UN’s 17 Sustainable Development Goals are to be met by 2030.

Green Google: Are Tech Brands the Sustainable Superheroes of the 21st Century?

Isaac is an undergraduate reading English at Jesus College, Cambridge. His research interests include the subaltern, ecological criticism, and the invention of race. He grew up in Oxfordshire and was involved in local start-ups by the age of 16, working at Global Academy Jobs and dWell Housing. He’s held editing positions for The Cambridge Student and has been published in Varsity, Eliot’s Face, BAIT, and notes for his journalism and poetry. He enjoys travel and music, and has spent time living in Costa Rica and Kenya as well as the UK.