Future Pandemics: How IMF and WTO Leadership Can Make the Difference 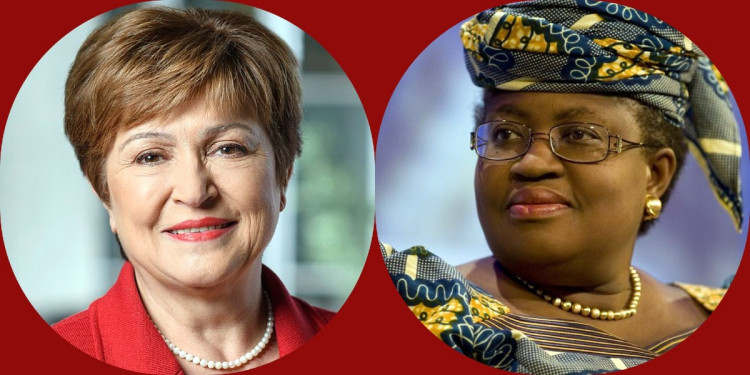 2021 begins with new international leadership in positions to make huge differences in the way the world deals with preventing, preparing, or responding to the next pandemic infectious disease outbreak. Two former World Bank Vice Presidents, neither medical doctors and both women, are in charge of key international institutions with a big impact on global health. One, Kristalina Georgieva has been heading the International Monetary Fund (IMF) since 2019, and the other, Ngozi Okonjo-Iweala was appointed in February 2021 as the Director-General of the World Trade Organization (WTO).

The IMF is the steward of global financing, the WTO shapes global commerce in pharmaceuticals, other health goods and services. These are just two essential global enablers (or disablers), but their performance is necessary for our public health future. Among other organizations with as big or bigger footprints for global health, are, of course, the World Health Organization and UNICEF.

Because leadership matters, it is important to know something about the two women at the helm of the IMF and WTO to sense where they come from, their reputations, their priorities and where they might guide their institutions in terms of global health engagement.

The New IMF and WTO Leaders: Georgieva and Okonjo-Iweala

Georgieva received a master’s and a doctorate in political economy and sociology in her home country, Bulgaria, and did post-graduate research in natural resources economics and environment policy at the London School of Economics and MIT.

In this role, she served as the interlocutor between the World Bank Group’s senior management, its Board of Directors, and its shareholder countries.

Her efforts were widely recognized as being key in the 2018 endorsement by Bank members of an ambitious package of measures that included a $13 billion paid-in capital increase, a series of internal reforms, and a set of policy measures that greatly strengthened the institution’s ability to scale up resources and deliver on its ending poverty mission in areas of the world that need the most assistance. This was the largest funding increase in the Bank’s history at that time.

During this period, she committed the Bank to gender equality within its own ranks by setting the target for women to occupy 50 percent of senior management positions at the World Bank by 2020. This was achieved ahead of time in October 2018.

But what is interesting about her career and makes it somewhat unique, is that Georgieva did not limit herself to the World Bank. She is that rare international manager that has managed to move between a major international organization like the World Bank and the European Commission.

In 2010, she became part of the Barroso Commission and was appointed Commissioner for International Cooperation, Humanitarian Aid, and Crisis Response, managing one of the world’s largest humanitarian aid budgets and promoting the EU as a global champion for resilience and disaster risk reduction as well as for civil-military cooperation and respect for international humanitarian law. In this role, she tripled the funding for the refugee crisis in Europe and pioneered cash-based assistance. And her first action was to coordinate European response to the Haiti earthquake disaster.

In 2014, she again became active within the UN, in particular as part of the Global Commission for the Economy and Climate and in 2015 as co-chair of High-Level Panel on Humanitarian Financing that prepared the ground for the 2016 World Humanitarian Summit and the adoption of the commitments known as the “Grand Bargain” seen as new ways to provide aid.

At the same time, with the incoming European Commission led by Jean-Claude Juncker, she became Vice-President for Budget and Human Resources.

While serving as European Commissioner, she was nominated by Bulgaria in 2016 for the post of United Nations Secretary-General and entered the race for U.N. leadership against, among others, Antonio Guterres, former Prime Minister of Portugal and High Commissioner for Refugees.  Her candidacy however was not successful. In 2017  Guterres took office and is the current holder of the position.

Okonjo-Iweala, a native of Nigeria, received her bachelor’s degree in economics from Harvard University and a doctorate in regional economics and development from MIT.

She had a 25-year career at the World Bank, twice interrupted to serve as the first Nigerian woman Minister of Finance, under two different Nigerian Presidents. Her World Bank career began as a development economist, rising to the position of Managing Director.  As Managing Director, she had oversight responsibility for the World Bank’s $81 billion operational portfolios in Africa, South Asia, Europe, and Central Asia. She spearheaded World Bank initiatives to assist low-income countries during the 2008–2009 food crises, and later during the financial crisis. In 2010, she was Chair of the IDA replenishment, the World Bank’s successful drive to raise $49.3 billion in grants and low-interest credit for the poorest countries in the world.

Throughout she was recognized as a strong proponent of gender equality. Her constructive work as GAVI board chair has also made her keenly aware of public health issues, pandemics in particular.

In 2012, when the competition was opened up to all countries and ostensibly to be based on merit, she was a candidate for President of the World Bank, running against the subsequently appointed President Jim Yong Kim. If elected, she would have become the organization’s first female president.

These are two women with extraordinary talent, grit, perseverance and experience who are now in positions to shape the twenty-first century’s global response to future infectious diseases and other health emergencies.

They can bring their proven track records of success in institutional management, enhanced developing country access, and gender sensitivity to bear in the unfolding environment of health disease touching everyone, everywhere. COVID-19 is a new challenge for each.

Global Health: Where the IMF and WTO Can Do Better

In 2013, Olga. B. Jonas, then working at the World Bank and today at the Harvard T. H. Chan School of Public Health, carried out a study that is today part of the World Bank’s “open knowledge” collection. In it, she argued convincingly that there was ample scope for both the IMF and the WTO to play an expanded role in global health.

For the IMF, in addition to its very important conventional emergency financial assistance, temporary investment incentives, other policies and advice in response to large shocks, there was a need to make as a future priority a better understanding of the impact of infectious disease events, examine pandemic risk, what it means for development and strengthen medium-term expenditure plans in light thereof, and how management could be improved, both at country-level and internationally. It should be an active participant in assisting the newly G20 established “High-level Independent Panel on Financing the Global Commons for Pandemic Preparedness and Response,  established in Rome, Italy.

For the WTO, it should reflect in the future on its various policies and mechanisms to shape world commerce, including reviewing its “Agreement on Trade-Related Aspects of Intellectual Property Rights” (TRIPS).

TRIPS was designed to require member states to grant pharmaceutical patents so as to broaden access to HIV/AIDS drugs at reasonable prices to developing countries. At the same time, WTO’s mandate is to maintain a global trading environment conducive to pharmaceutical and other health-related research and development.

TRIPS came about because of the HIV/AIDS pandemic and the urgent need to specifically expand  HIV/AIDS medical patent access. With the COVID-19  pandemic,  there are similar needs, only more so, for greater access to diagnostic testing tools, testing, therapeutics and vaccines, and personal protective equipment. Review of TRIPS and other options to better pursue core WTO mission in a global health crisis and for low- and middle-income countries, should be a priority.

In neither case will it be easy because there are long-held institutional reasons and professional resistance in doing so. But neither Georgieva nor Okonjo-Iweala have chosen easy roads in the past and are not likely to do so now. If anyone is likely to open the path to a more comprehensive approach, they are well-poised to be the ones to do it.

Editor’s Note: The opinions expressed here by Impakter.com columnists are their own, not those of Impakter.com. — In the Featured Photomontage: Georgieva 2019 World Bank Group/ Grant Ellis – Dr. Ngozi Okonjo-Iweala, IMF appointment 2020 The Interview Photo credit: foreignaffairs.com

Inspiring the Youth Towards Smart Farming Through Small-Scale Irrigation

Inspiring the Youth Towards Smart Farming Through Small-Scale Irrigation