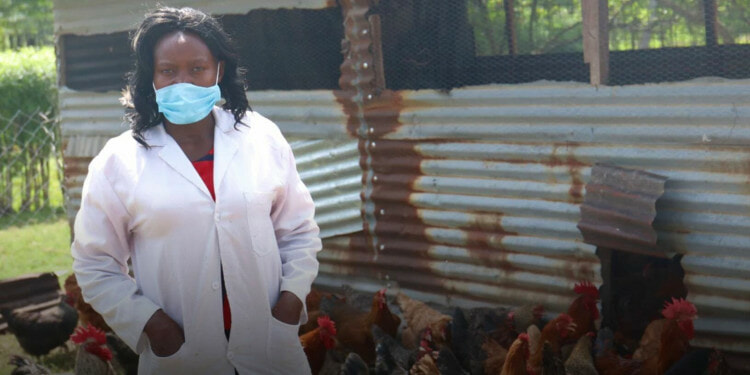 After surviving 17 years of domestic abuse, Lilian Ocholla separated from her husband a year ago. Resilient and resolute, the 39-year-old mother has faced many challenges but, with the help and support of her family, she is now committed to improving her well-being and building a better future for herself and her children.

Today, Ocholla is challenging gender-based violence by running what is fast becoming a successful poultry business, through the Hatching Hope program in Kenya. Born from a partnership between Cargill and Heifer International, the project works to empower smallholder farmers as integral players in the poultry value chain, while alleviating malnutrition through poultry promotion and consumption.

Before her passing at the end of 2020, Ocholla’s mom was a strong force in her life and often encouraged her daughter to start her own business. But Ocholla’s husband would purposefully undermine their efforts.

“He would just spoil everything, and then I would go back to him again,” Ocholla said. But this time was different. “This time I told myself that I have to do it. This is why I started poultry farming.”

The turning point for Ocholla arrived through the air waves: After she heard a local radio station inviting people to attend a training in Kisumu, she decided to take the leap and start a poultry business of her own – and in the months since, she hasn’t looked back.

“I went to Kisumu and talked to the staff, saw their chicken and admired the work they were doing,” she said. Hatching Hope partner Chicken Basket, a large-scale buyer and social enterprise providing poultry farmers with products and services, covered valuable chicken rearing techniques. There, she also met Christopher Adhola, a community agro-vet entrepreneur from Bora Cooperative, one of the program’s producer organizations.

“He shared with me a lot of technical advice on poultry farming and introduced me to a training he was conducting at Uwimbi with Hatching Hope and the Kenya Society for Agricultural Professionals,” Ocholla recalled. “I went there weekly for one and a half months, and I got a lot of information such as how to handle poultry diseases, vaccinations, marketing and structure construction.”

Three months later, her flock has 78 birds and Ocholla is already making plans to take her enterprise to the next level.

Securing starting capital is one of the biggest obstacles many small-scale poultry farmers face, and the global pandemic only exacerbated this issue. Fortunately for Ocholla, her parents supported her with an initial investment.

“My mother left us some money, so I told my dad that I wanted to use the funds to start this poultry business,” she said, adding that he has been encouraging and supportive throughout. “It’s as if we are doing it jointly. I want him to be part of it.”

According to her father, Benson Ochola Otieno, they invested a total of $965 – with $368 put toward constructing the poultry house and other structures, $359 to purchase 100 two-month-old chicks at $36 each, and $239 for feed supply.

Tapping into a New Market

One of Lilian’s biggest worries, however, was figuring out how to market her birds and make a profit. “Sometimes you can have the chicken, but you don’t have the market,” she explained.

But when agro-vet Adhola connected her with Bora Cooperative, the solution to her problem was no longer beyond reach. As a member of the cooperative, a farmer-owned agribusiness supported by Hatching Hope Kenya, Ocholla now has access to new customers.

“Bora has helped me a lot,” she said. “Recently, when I wanted to sell the cockerels, I just took pictures of them and I posted on our WhatsApp group, and within two days [they] had sold 15, each at $7.” Digital tools like the messaging application WhatsApp have been useful in connecting co-op members to each other and to customers – and have also proven vital to mobilizing her community.

For Ocholla’s community, Hatching Hope offers a new way of engaging and connecting farmers to the business expertise of Cargill’s teams around the world, with a focus on farmer prosperity and safe, responsible and sustainable nutrition.

Determined to help those around them, Lilian and her father formed a Poultry Interest Group in her village to increase farmers’ awareness about commercial poultry farming. Some initial hesitance from community members didn’t dissuade her. “I want their livelihoods to change,” she said. “Even if I go to the market and talk to two people, you’ll get at least one who responds positively.”

Now 11 members strong and growing, the group receives training from community facilitators connected to Bora Cooperative. And, equipped with poultry rearing know-how and eager to pass it on, Ocholla is sharing her expertise any chance she gets.

“Recently I went to church to deliver a crate of eggs,” she said, and while there she “taught a few people about synchronization [a natural chicken management technique] for like 10 to 15 minutes.”

Adhola affirms the importance of synchronization, a method of increasing a farmer’s total chickens by encouraging hens to continue laying. “If [Ocholla] can promote that, within a short amount of time these farmers will be able to increase their flock sizes,” he said.

With an eye to the future, Ocholla has set a target of owning 1,000 birds by the end of 2021. She’s optimistic that poultry farming will address her and her community’s financial needs as well as increase food security, which has deteriorated since the pandemic’s onset.

“Myself, I am just OK, but you find many in this community can only afford one gorogoro [2kg tin of maize] to feed their families, which is not always enough,” she said. With Hatching Hope‘s work to improve producers’ livelihoods and with Cargill’s technical and market expertise, Ocholla is hopeful more members of her community will turn to poultry rearing, opt to consume meat and eggs, and, ultimately, combat food insecurity.

Editor’s Note: The opinions expressed here by Impakter.com columnists are their own, not those of Impakter.com. — In the Featured Photo: Lilian Ocholla with her growing flock of chickens in Kenya. Featured Photo Credit: Francis Mwangi.

Toward Planet and Species’ Sustainability: ‘A Road Not Taken’?

Over 76 years, Heifer International has worked with more than 36 million people around the world to end hunger and poverty in a sustainable way. Heifer supports farmers and rural business owners in 21 countries in Africa, Asia, and the Americas, including the United States, by providing resources, training and connection to markets, ultimately helping families build secure livelihoods that provide a living income and strengthening local economies.