Green Google: Are Tech Brands the Sustainable Superheroes of the 21st Century? 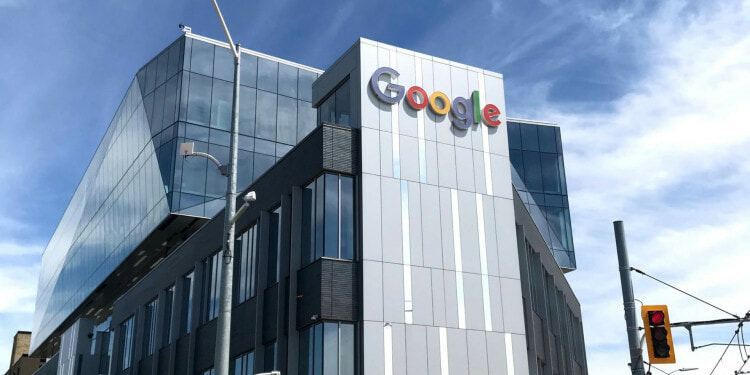 Encompassing all aspects of online daily life, Google offers everything from email, maps, domotics, transportation and Google Meet to Google Drive for cloud storage of files. The array of services offered by the tech giant have been essential, especially over the last 12 months of Covid-lockdowns. In September 2020, Google announced that it had offset all carbon emissions since the formation of the company in 1998.

In October, only a month later, the company pledged to make all packaging for hardware products 100% plastic-free and 100% recyclable by 2025. Given Google’s recent sustainability achievements, it is not unreasonable to suggest they will meet their packaging commitment.

That said, in the past, the company has made “substantial” contributions to some notorious climate deniers, such as the Competitive Enterprise Institute (CEI). This leads us to question, where does Google truly lie in terms of sustainability and climate activism?

To answer the question, I turned to the Impakter Index, a reliable reference for evaluating the sustainability of brands as the Index is the product of a team of experts that work to uncover all the available data – from sustainability certificates to news reports – in order to arrive at a trustworthy rating. And the Impakter Index has given Google a B rating, meaning Google is considered  “good” on the front of sustainability and the analyst outlook is positive. In taking a deeper look at the company’s policies, we will explore why Google was given this rating. 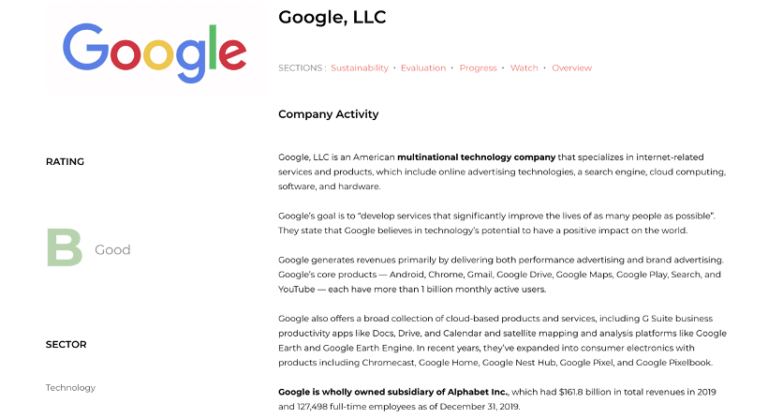 Despite some of the questionable investment choices made in the past by Google, their recent commitment and goals are indicative of positive change towards a “greener” future.

Tech brands, including Google, dominated the business rankings in 2020. In part, this was due to the pandemic, and the shift in working and socialising online. In 2020, YouGov placed Google at the top of the table for Best Global Brand for the fourth year in a row, beating the likes of Youtube, Amazon and Netflix. The ranking is determined using each brand’s Index score, which is calculated using the public’s perception of the brand, assessing the overall “brand health.” 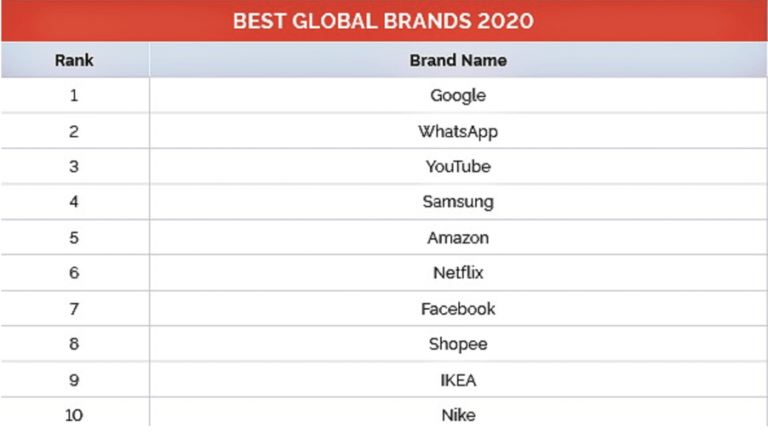 In May 2021, Lightspeed, a provider of cloud-based, omnichannel commerce platforms, announced the integration of Google tools directly into its platform. As independent businesses embark on their journey of returning to “normality,” safely re-opening after a year, this integration will allow independent retailers to manage Google tools directly in the Lightspeed commerce platform.

New data from Google has suggested that consumers are interested in shopping locally, but due to the pandemic, many still prefer to shop online. In the past year, online searches for “local” + “business(es)” have increased by more than 80% year over year.

This global partnership between Lightspeed and Google incorporates three essential tools directly into the Lightspeed platform: Google Local Inventory Ads, Google Smart Shopping Campaigns, and Google My Business. For omnichannel retailers, who use a multichannel approach to provide a smooth customer experience online or in a physical store, this integration is highly convenient.

The influence Google holds over every single aspect of our daily lives is ever more evident. The corporation has the power to reach almost every single person on the planet, which makes the question of how they use their platform to promote sustainability and environmental activism all the more pressing.

According to the report of the Impakter Index team, Google believes “technology can be used to help address the biggest issues facing humanity”.

Google has committed to ‘climate action’ (SDG13), by matching 100% of the electricity consumption of its global operations with renewable energy (SDG7).

Furthermore, Google invests in artificial intelligence, particularly in the role it could play in aiding the company to achieve greater energy efficiency gains in their data centers; and it invests in prioritising the use of safe materials and chemistry across Google’s built spaces.

Other impressive achievements include:

In addition to the numerous targets, projects and progress made by Google, they also invest in schemes aimed at giving back to communities, through education, employment opportunities, as well as aiding lower GDP countries.

Moreover, Google is the first cloud company that has announced that they will not abuse their technology to create customized algorithms for the oil and gas industry. They’ve also been acknowledged for their work, receiving praise from large environmental organizations for their actions, including Greenpeace.

However, there is some criticism of the information published by the company as it appears to contrast with what they actually deliver. Every year, Google publishes a diversity report. Their most recent 2020 report claimed that they “work hard on improving diversity and inclusion,” however in reality, only 32% of their global employees are women.

Furthermore, every year they launch a new Pixel phone, encouraging consumers to upgrade their devices in favour of the newest technology, thus contributing towards a throw away consumerist culture.

Perhaps these seem minor in comparison to the figures and impressive projects backed by the company, however, they are worth noting given their declared commitments towards sustainability.

So, how sustainable is this tech giant?

The company has made progress and the Impakter Index team has taken care to clearly identify it. On July 27, 2015, as part of the American Business Act on Climate Pledge, Google committed to tripling its purchases of renewable energy from 1.1 GW to 3.4 GW by 2025. By the end of 2018, Google had signed 34 agreements totalling more than 3.75 GW of renewable energy, exceeding their target seven years early. Impressive.

The conclusion potentially reveals the nature of Google’s sustainability policies. In its evaluation report, the Impakter Index team concludes:

“Google has received a few awards, is listed in Forbes, and has certificates (ISO 50001, LEED). They are quite compliant with the UN Sustainable Development Goals, cooperating with numerous NGOs, providing finances and implementing their own sustainable policies.

Google emphasizes the usage of technology for a better world and they try to minimize their carbon footprint. They are the first cloud company that announced that they would not create customized algorithms for the oil and gas industry. Google has received praise from several large-scale environment organisations, including Greenpeace.”

The company is rated as “B” for their effort to protect our planet. And it earns brownie points on transparency: Google’s environment and diversity reports are easily accessible and clearly state the progress made within the company. The goals they have set for the coming years are judged to be direct-on-target and are already being achieved ahead of schedule.

Finally, Google reports the carbon impact of its activities through the Carbon Disclosure Project (CDP) which has consistently given Google an A and a rating of 99 for participation. CDP is a not-for-profit charity that runs a global disclosure system for investors, companies, and cities, managing their environmental impacts. Important to note is that CDP is considered the “gold standard” of environmental reporting. This certifies the good work done by Google.

It would appear Google is an inspiration for many other global brands, achieving positive environmental policies while remaining hugely influential and relevant.

So why is Google not getting an A on the Impakter Index? To improve beyond the B rating, the Impakter Index team suggests that Google should aim to acquire more certificates, as well as aligning their future goals more closely to the SDGs. Will they make it? They’ve shown their commitment so far and there’s every reason to believe that, yes, Google will make it.

Editor’s Note: The opinions expressed here by Impakter.com columnists or contributors are their own, not those of Impakter.com. — In the Featured Photo: Google building front set against blue sky. Featured Photo Credit:  hk on Unsplash.

The Use of Gene Editing to Adapt to the Climate Crisis

Emilia Sharples is a 4th year student studying Art History at the University of St Andrews. She is currently working as a sustainability analyst as well as with the editorial team for Impakter. Emilia is interested in connecting sustainable practice to all walks of life, be it within fashion, the entertainment industry or simply everyday consumption habits. She is originally from Cardiff, South Wales where she helps run the family business selling homegrown, organic produce when not in university!