Groupmuse: Because Art is Better with Your Friends 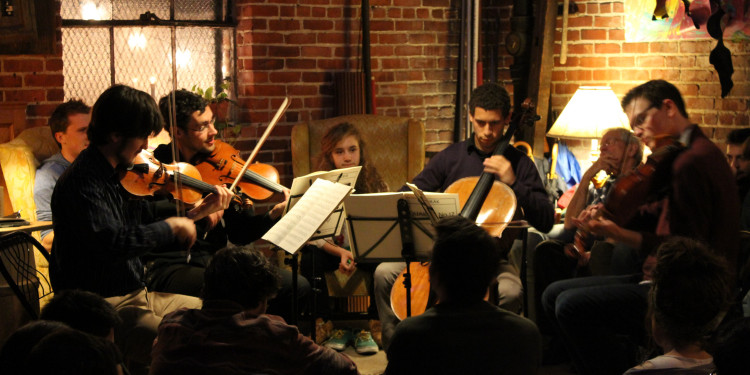 I recently came across an article describing a new company called Groupmuse, a company which brings concerts to home settings, displays incredible classical music, forges  friendships, and most importantly allows people to transcend through beauty.  Although I am not an avid fan of classical music, I thought the idea of Groupmuse was fantastic.

Eager to learn more about Groupmuse I got in touch with Sam Bodkin, the CEO and founder of Groupmuse, and he opened my eyes to Groupmuse’s incredible mission; he underscored the need for beauty in today’s society saying:

I think we are living in times that are in desperate need of great beauty and that’s not something that is often enough recognized—the value of beauty, the need to transcend through beauty, and to lose yourself in the glory of something you’re experiencing

Q.Please tell me a little bit about your entrepreneurial work.

I am the founder and CEO of Groupmuse. I founded Groupmuse as soon as I graduated from college in 2012 so I hadn’t done anything except found Groupmuse, but I’ve been doing it for nearly 3 years. I started this company, but the most important thing I did was I got a really awesome team together. My first cofounder, Ezra, joined in June of 2013 and Kyle, the second cofounder, joined as CTO in September of 2013, and finally Emily Chiappinelli shortly thereafter and it has been growing from there. That is the most important part about being a founder, in my opinion, it is just an idea until you get incredible people to turn it into a real thing.

Q.How did you come up with the idea for Groupmuse? Also, please tell me more about it.

A year before college I took a year off and couch-surfed extensively. I went to Europe and that experience was revelatory. It showed me what the power of the internet can do to connect people who are willing to be so generous with each other in the interest of a cultural exchange. That was a big influence. Then, in my freshman year of college, I discovered classical music, serendipitously. I was in my friend’s basement, who is a great cellist, and he put on a string quartet by Beethoven that he was working on, the Grosse Fuge 133, and it was so at odds with everything I thought classical music could be–  it just blew my mind. Within 6 months I had become an absolute fanatic and had decided to devote my life to the cause of finding a place for classical music in the world.

I fell in with this group of musicians outside Boston who would get together, party with one another, and play chamber music at a really high level. Basically everyone there was a musician and as a non-musician I attended and thought, “wow, this is so vital, it’s a breakdown of the distinction between enjoying myself and enriching myself.” It felt so good because it was a great work of art and I was also with a great group of people. It was like everything that I wanted hadn’t been experienced and it occurred to me that if anyone can do this, everyone can do this. A string quartet requires no equipment, anyone who has a living room can have a string quartet. You get four chairs, you move your coffee table to the side and you’re in business. I thought of the idea towards the end of my junior year at college, really started crystallizing it over the course of my senior year, and then by the time I graduated  I started working on it. 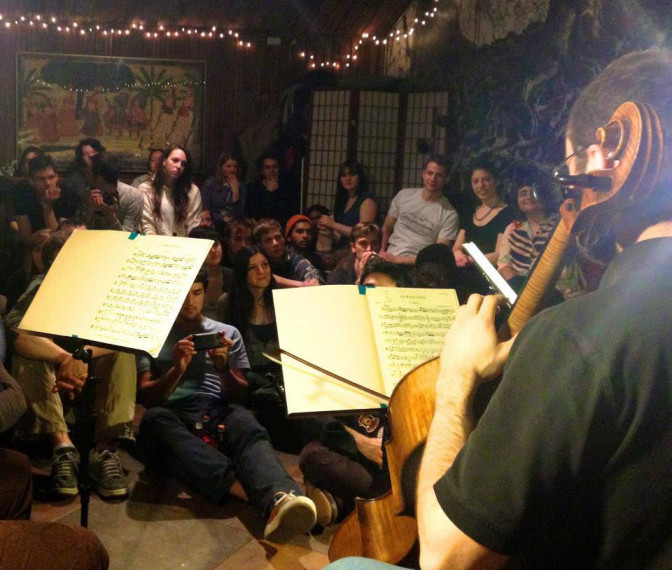 In the photo: A Groupmuse Event

Q.What do people appreciate about Groupmuse?

I think we are living in times that are in desperate need of great beauty and that’s not something that is often enough recognized—the value of beauty, the need to transcend through beauty, and to lose yourself in the glory of something youre experiencing. Some people love hiking, I myself love hiking. Some people go into huge churches and marvel at the architecture and the stained  glass windows, some people go to string quartets, and some people go to Groupmuse, and they cannot believe that something so dynamic, evolved, and exquisite, and melodious is happening 5 feet in front of them. So I think a lot of it is about the need for beauty, but then a lot of it is about the need for human connection, and I think the true driver of Groupmuse’s growth has been the fact that it’s a reliable way for people to come together to experience something meaningful in a positive way. Social opportunities in society, right now, are sometimes overwhelming, scary, and tense, like a dance club or a bar that’s so loud that you can’t even hear your friends’ talking and I think that people just want to connect in a more sincere  and genuine way. To do that in these small intimate moments in living rooms around a country, sharing a beautiful work of art, I think is just about the best way to do that. I will say that across the board, at the beginning of the party, a lot of people do not know each other because the way that it works is a host invites all of his or her friends and then members of the Groupmuse community RSVP. Anyone can sign up to Groupmuse and RSVP to any Groupmuse they want and so they share this experience with strangers and friends. The fact that we are all experiencing this thing collectively, something that takes us to a place that we don’t normally go to (some of us have indeed never been to because most of the people who come to Groupmuse are not regular classic music listeners), brings us together and the volume of conversation at intermission goes through the roof and everyone’s talking to everyone. It really is an extremely powerful thing that is happening time and time again all over the country. We had 11 in New York last week, we have 8 in san Francisco this week, and in Boston we’re still doing 3 -7 a week—we’re just growing over time. 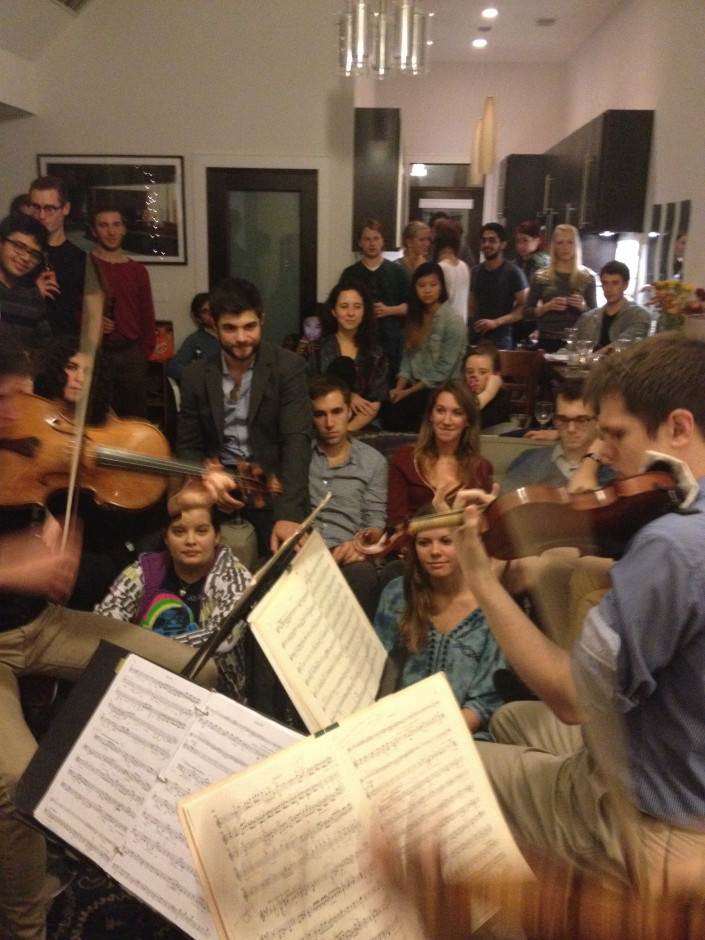 In the photo: A Groupmuse Event

Q.What do you think has made your business successful? What have you accomplished?

I think ultimately the thing that everyone was always saying is that: “classical music needs saving,” but that’s not the question we need to be asking. For a generation that doesn’t care about classical music, they’re not going to care if it dies, so we need to talk to our generation and ask: “what about the world needs saving?” We need beauty in our world, we need substance in our culture, and we need opportunities to connect in real time, and real space and classical music can do all those things—yes, and it looks like Groupmuse when it does. I think that’s a big part about why it has been successful.

What have we accomplished? Well, we’ve gotten so many people who think they don’t love classical music tuning into it on a regular basis, and it’s really changing the way people think about the art form. We’ve also created many many friendships, it’s really wonderful. I live in New York now, but I started the program in Boston and by the time I left Boston, I couldn’t walk down the street without seeing a familiar face—it’s different in New York because New York is so huge, but that was remarkable.

Q.What are the most important characteristics to have in order to be a successful entrepreneur?

I think the most important characteristics are sincerity, honesty, passion, conviction, and hard-work. And the reason I say those qualities is because those are the qualities you need to get great people to join you. And that is the truth about what has happened with Groupmuse—it has been a success because great people have joined and they made it an essential part of their lives. I don’t even know what it is that qualifies me to run a company, I just know that I  was able to get really great people to join, and then it becomes a company.

Q.How did you first become involved with entrepreneurship?

Q.What is your best advice for young and new entrepreneurs?

The energy, the commitment, the passion. I think that the most important advice is to work with good people—people you can trust and rely on. Peoples whose vision of the project accords with your own and people that you love. Love is so important among us.

How Climate Change Threatens Our Morning Tea: The Interview

Courtney Carter is studying psychology and economics at Duke University, with a focus on Innovation and Entrepreneurship. She grew up in San Francisco in close proximity to Silicon Valley, no doubt one of the reasons why she is interested in learning more and writing about the innovation process and the role of entrepreneurs.