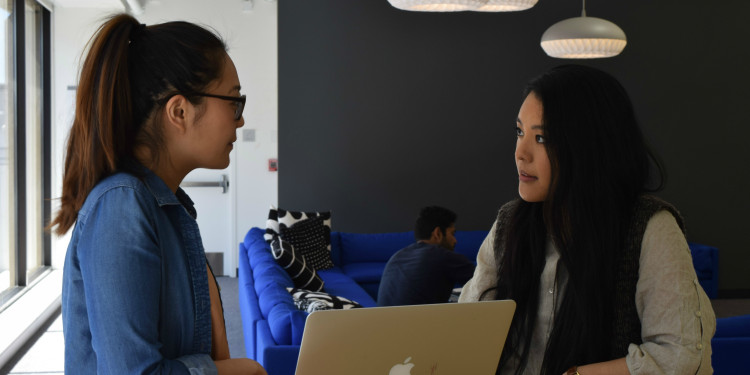 “I remember the first time I ever met a refugee,” recalls Doug Hewitt, Co-Founder of 1951 Coffee Company, a specialty coffee nonprofit that provides job training and employment to the refugee community in the San Francisco Bay Area. As a graduate student, Hewitt was working at the same Starbucks location in Marin County, California as this refugee, who originally came from East Africa. Working behind the counter at Starbucks was just one of the various jobs the young man worked at for 60-70 hours a week to make ends meet. Hewitt recalls how much his co-worker struggled with some things. “He was trying to spell names on cups and everything was phonetic. Customers would be extremely upset.” Hewitt witnessed angry customers asking the manager why she couldn’t find someone who spoke English “well enough to work at the cash register.” 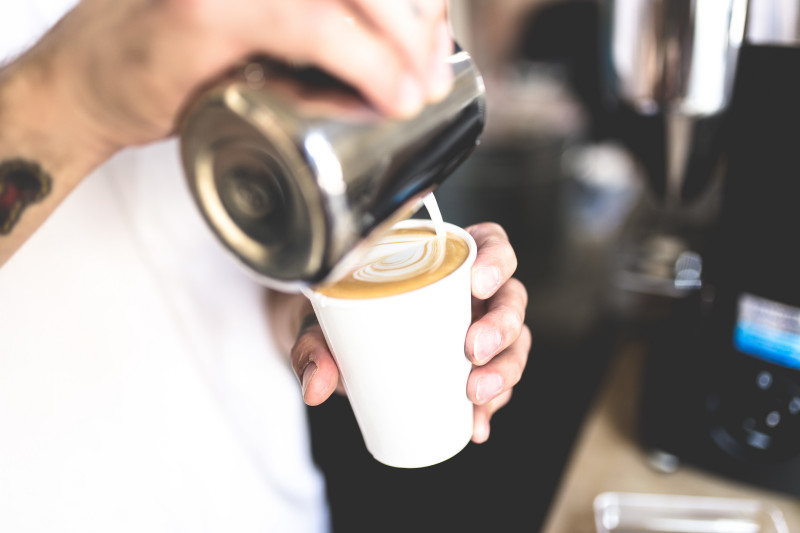 One day his co-worker shared the story of his journey to the United States. Beginning with a flight on foot from a war-ravaged country, the young man survived a sinking ship in the Mediterranean, detainment by the Mexican authorities, and being held hostage at gunpoint in Texas before making his way to Northern California.

The young man’s story resonated so strongly with Hewitt that he decided  to pursue a career dedicated to serving refugees. “I was sitting there in this Starbucks and thinking, ‘Oh my gosh, none of these people coming here to buy a drink from you, complaining about the way you spelled their name, have any clue what you’ve been through to arrive here and serve them that cup of coffee,” says Hewitt.

As the world population experiences unprecedented levels of displacement – the UNHCR currently reports that 65.3 million people globally have been forced from home – only a very small portion of refugees will ever be resettled in the United States. In addition to recently intensified political and cultural backlash, those who do make it to the United States face an uphill battle to economic self-sufficiency.

“The way that the refugee resettlement system is set up here is that the US government expects a refugee to be economically self-sufficient in 6 months,” explains Hewitt. “That’s regardless of their background, their education, their language abilities.” Recognizing the tremendous strain this places on newly arrived individuals and families, companies like Hewitt’s 1951 Coffee Company, along with various nonprofit organizations – and even some startups – are working to ease this transition. 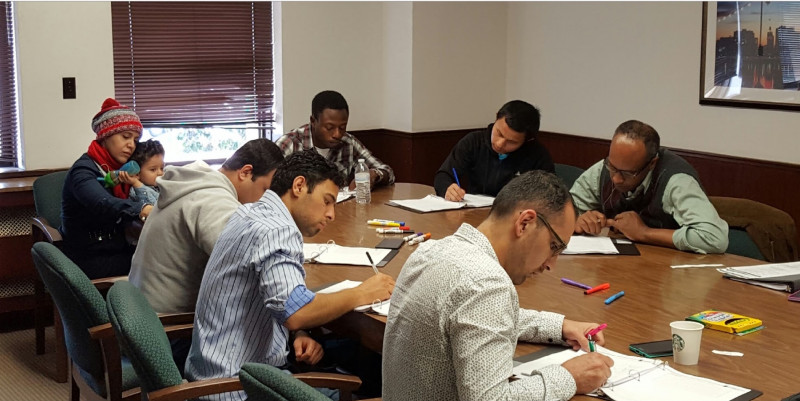 In the Photo: Clients participate in activities at the IRC Oakland office Photo Credit: IRC Oakland

“Just placing someone in a job doesn’t mean we’re done,” says Lara Maxey, Economic Employment Manager of the International Rescue Committee (IRC) Oakland office. “We provide a lot of case management and retention services to make sure that a person is really self-sufficient throughout the program and beyond.” The IRC Oakland’s Economic Empowerment programming includes the Office of Refugee Resettlement’s Matching Grant program, Alameda County Social Services Limited English Proficiency employment program, and the Center for Economic Opportunity which provides clients with financial education and coaching.

While the IRC represents a well-established social sector response to refugee resettlement, with an increased interest in and awareness of the needs of resettled refugees in the United States, some new companies are also aiming to contribute to a better lived experience for these individuals while also becoming sustainable businesses. In addition to enterprises like Hewitt’s, tech companies are staking a claim in the space. One such company is Kinstep, which is currently piloting an online solution to match immigrants and refugees acclimating to the United States with available employment opportunities.

Related article: “BERKELEY TO BEIRUT – FIGHTING FOR REFUGEES 7,000 MILES AWAY“

“I found that a common pain point for people was really employment. Especially getting valuable employment and not being exploited,” says Tenzin Seldon, Co-Founder and CEO of Kinstep. As a tech-enabled platform, Kinstep aims to match employers with suitable, high-quality employees for a lower price than many agencies currently charge.  Kinstep also ensures their pilot users get a living wage salary, something that can be uncommon in immigrants’ first job placement in the United States.

“We’re able to tackle many problems with technology, like dating,” says Seldon. “And we go to Whole Foods to buy chocolates and coffee that are fairtrade.. Why can’t we make fair employment practices an issue that is as important to us? That’s the brand Kinstep is trying to build.”

Hewitt also prides his company on its efforts towards financial sustainability. “When we told people we were going to open a café and it was going to be a nonprofit café employing refugees,” he says, “very often what they heard in their heads was ‘You’re going to open a subpar cafe and really you’re going to rely on donations and have some refugees working there.’” But that’s out of the question for 1951’s Founders. They’ve chosen to work in the higher end of the industry, in specialty coffee. Besides positioning them to at least break even while paying their staff a living wage, it allows the company to provide industry credibility for their staff, something crucial for people just beginning to build their personal and professional networks in the United States. 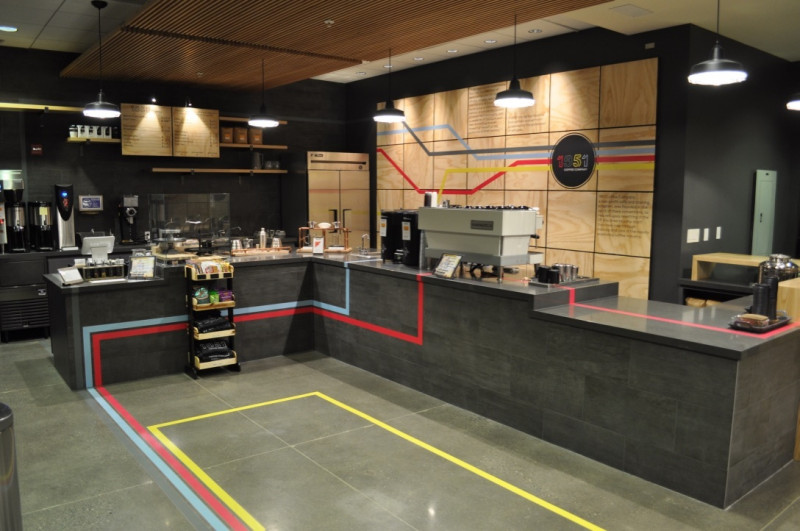 In the Photo: 1951 Coffee Company in Berkeley  is a sleek, modern cafe Photo Credit: Doug Hewitt

Since opening in January of this year, 1951 has managed to build partnerships and garner support that accelerates this credibility. One partner, Blue Bottle Coffee, has employed a number of graduates from 1951’s barista training program. Blue Bottle baristas have spent time with trainees, helping them improve their skills and also begin to build a personal network in the Bay Area. Managers have attended trainings to learn more about employing members of the refugee community.

Hewitt and his colleagues impress upon managers not only the professional role they can play in refugee employees’ lives but also the personal one. “They may be that one connection that a refugee has at the early stage to an American in this community,” says Hewitt. He encourages managers to be open to answering questions that might have nothing at all to do with work. “By doing this, you help them begin to build these networks and connections that they really need to be a part of the larger fabric of our society,” he says.

Because the demographic makeup of incoming refugees is heterogeneous, programs that work with the community on employment and economic empowerment must be able to adapt to the needs of specific individuals. The needs of young men arriving from the Democratic Republic of the Congo can be very different from a Syrian doctor or someone who worked as a translator with the US military in Afghanistan or Iraq.

In the Photo: Clients participate in activities at the IRC Oakland office Photo Credit: IRC Oakland

For Maxey and the IRC, this means remaining as nimble as possible. “We’re constantly re-evaluating how we deliver our service and tailor it to a specific population,” she says. Partnering with organizations like 1951 or others that coordinate training programs for individuals with specific skills and interests is a benefit to her program and clients.

Another key to longer-term success is the one-on-one follow-up her team does with both employers and employees. Because the employer-employee relationship for recently resettled refugees often spans cultural and language differences, having a third party involved can prevent minor misunderstandings from costing individuals their jobs.

Maxey shares an example of a client whose employer reported that he wasn’t showing up for work on some days. Upon investigating, Maxey’s team found that in the client’s home country the work week was very different from the American one. No one had ever sat down with the client to review days of the week and expectations for regular “work week” employment in the United States. “Now that person is showing up to work and being on time,” she happily reports.

As a Tibetan-American asylee herself, the importance of the context in which refugees and immigrants are living is never far from Seldon’s mind. She is’ therefore seeking to build community while she builds an employment platform. Refugees and immigrants “may have one community center or one church they go to,” she says, “but what about the rest of their days, where they interact with people who have never heard of their countries or who always mischaracterize them based on appearance or misjudge where they’re from?” Therefore, Kinstep will host conversations and events  to supplement their employment services and build a community.

“There’s a lot of immigrants who may not have the solace of a community where they can go to seek help regarding how to deal with a bad boss, or what’s appropriate professional attire,” says Seldon. Kinstep is hoping to fill this current void with offline and online meetups.

Hewitt echoes the deep need for community building and its effect on the long-term success of resettlement. But he spreads the imperative beyond the refugee and immigrant communities themselves. Part of the work of 1951 Coffee is to bring refugee lives into the open – to encourage all community members to recognize these individuals and welcome them. “Refugees are people, just as deep and complicated as you are,” he says. “When you think about all that goes on inside your head, and your mind, and your life – both in the past and what you’re looking towards in the future – realize that for a refugee, it’s just as deeply complicated. And these are not people that are very far away, only on your TV screen or a website. There are probably more refugees in your community than you’ll ever be aware of. Refugees are here and they’re part of our society.”

Recommended reading: “A LIFE IN LIMBO: BETWEEN BORDERS“

EDITOR’S NOTE: THE OPINIONS EXPRESSED HERE BY IMPAKTER.COM COLUMNISTS ARE THEIR OWN, NOT THOSE OF IMPAKTER.COM.  FEATURED IMAGE:  Seldon and a Kinstep volunteer work on the pilot website Photo Credit: Kristie Moy

How Our Obsession with Testing Drives Educational Inequality

A Spiritual Adventure with Alexi Torres

Sarah Cramer is a nonprofit communications and development professional with a broad range of skills and experiences including event planning, volunteer management, grant writing, and online and print communications strategies. Sarah is a Harvard University graduate and and recently finished her MBA degree with a focus on nonprofit and social enterprise management at UC Berkeley’s Haas School of Business. Her goal is to inspire sustainable change in the world and contribute to organizations that promote doing well by doing good.

Girlhood Annihilated: Rates of Child Marriage Are Soaring in Ethiopia

A Spiritual Adventure with Alexi Torres