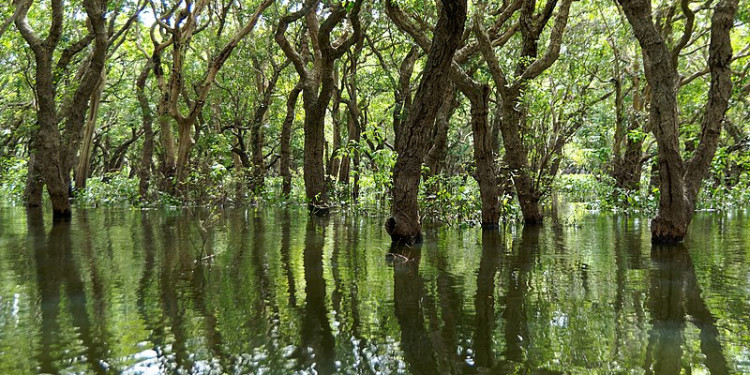 Mangrove trees lining tropical coasts are undervalued yet mangrove protection should be part of the plan to save the planet and protect biodiversity.

Mangroves are trees that grow miraculously on seawater, fringing some of the tropical shores of our planet.

They shelter a wealth of wildlife, protecting more than 3,000 fish species, many of which are of commercial importance.

Mangrove trees can sequester up to ten times as much of our carbon pollution per hectare as rainforests, making them an important player in limiting the impacts of climate change.

Despite all these benefits, mangroves tend to be undervalued. Mangrove protection is ignored. The explosive growth of shrimp farming, urban expansion, climate change and other aspects of economic development reduced mangrove forests by as much as 35% between 1980 and 2000. 11 of some 70 mangrove species are at risk of becoming extinct.

How to value nature

Mangroves and the rest of the natural world offer value to humanity at no cost. Every year, the environment provides about $125 trillion in free services, for example, pollination, water filtration, oxygen production, and flood protection. This is worth more than the entire global GDP.

The planet is like a bank account where every living thing pays in deposits, but we are the one species that keeps withdrawing funds. The overuse of our natural resources is costing us $6 trillion every year. By 2050, those costs could rise to $28 trillion.

Over the last century, we have become out of balance with nature. Today, 96% of mammals are human beings and our domesticated livestock. Only 4% account for everything else, from elephants to tigers to pandas. 70% of birds are our domesticated poultry, mostly chicken. In the ocean, 90% of the large fish – from sharks to tuna to cod – have been removed in the last hundred years. And 40% of insect species in the world are now endangered, too.

In 2019, the United Nations reported that around one million animal and plant species are threatened with extinction, many of them within decades.

The planet is like a bank account where every living thing pays in deposits, but we are the one species that keeps withdrawing funds.

A new report by the World Economic Forum in collaboration with PwC assessed 163 industry sectors and their supply chains for their impact on biodiversity. The biggest drivers of biodiversity loss on land are agriculture, and livestock farming and ranching. In the ocean, we have been taking fish out of the water faster than they can reproduce, and today 63% of fish stocks are experiencing overfishing.

As the world’s population continues to grow, we must figure out how to produce more food without destroying the planet’s ecosystems.

We need to replenish our savings accounts.

Today, only 7% of the ocean is designated or planned as protected – and only 2.4% is fully protected from fishing and other activities. We’re doing better on land – but even there, only 15% of our land is protected. How much more of the natural world do we need to protect?

Science tells us that if we are to prevent mass extinction and the collapse of our life support system, and if we are to avert a climate catastrophe, we need to keep half of the planet in a natural state.

Next Step: Protect at least 30 percent of our planet by 2030

The challenge for governments around the world – to be agreed at this year’s conference of the UN Convention on Biological Diversity in Kunming, China – is to start by protecting at least 30% of our planet (land, freshwater, and ocean) by 2030.

The Kunming conference will take its cues from the Paris climate conference but has a specific focus on nature. It will mark an opportunity to decide on how much more space we are willing to give to nature.

The hope is that in October 2020, the world will agree to save itself, rather than accept the collapse of human society as we know it.

There are signs that we can turn things around.

Vietnam has lost more of its mangroves than most countries and shrimp farms have decimated the coastal regions. The government, seeing the crisis, invested $1.1 million to restore 12,000 hectares of mangroves. This natural infrastructure saves the country $7.3 million every year in maintenance costs for dikes and other flood prevention infrastructure.

Vietnam’s success story with mangrove protection is well known, yet mangroves elsewhere are still being destroyed by unrestrained economic development. We need to get smarter about how we cultivate the land, learning from both past mistakes and successes, so we can have a healthy earth and a healthy food supply.

As biodiversity loss has become one of the defining threats to our civilization, we must lead where others have lagged in the past. We cannot be content to sit on the sidelines as entire ecosystems teeter on the brink of collapse. We need to invest in biodiversity before our account goes even deeper into the red.

About the author: Enric Sala is an Explorer-in-Residence at the National Geographic Society

Coronavirus and the Rise of China

Coronavirus and the Rise of China