The former president called for more action to keep the 1.5C goal alive - but will his words make a difference? 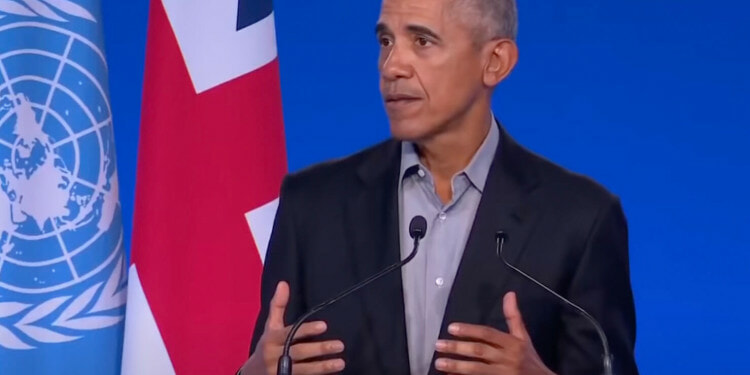 Former President Barack Obama criticised China, Russia and the American Republican party, as he urged countries to take more action to fight climate change in a speech at COP26. He called for more action so that the world keeps to 1.5 degrees of warming above pre-industrial levels.

“It was particularly discouraging to see the leaders of two of the world’s largest emitters, China and Russia, declined to even attend the proceedings,” he said. Neither China’s Xi Jinping nor Russia’s Vladimir Putin attended the summit in person. He claimed that the countries were showing a “lack of urgency” when it came to dealing with the climate crisis.

The countries’ had a “willingness to maintain the status quo on the part of those governments, and that’s a shame,” he claimed.

He also took aim at the American Republican party, citing its historic reluctance and downright hostility to tackling the climate crisis.

He said that Biden had been “constrained in large part by the fact that one of our two major parties has decided not only to sit on the sidelines but express active hostility toward climate science and make climate change a partisan issue.”

Obama also called for a full commitment of the $100 billion pledged to poorer countries in order to adapt to the effects of climate change.

The former president, while bringing into place important climate policy during his tenure as president, including the Paris Agreement, saw much of his work undone by his successor Donald Trump. Current President Joe Biden, with his slogan “America is back”, is now trying to reverse a lot of Trump’s actions, especially policies on climate. His current climate efforts are focused on an infrastructure bill that includes important climate legislation.

We’ve done some important work since the Paris Agreement was signed six year ago, but we’re still nowhere near where we need to be on climate. Watch live from #COP26 in Glasgow as I talk about the steps we can take to combat climate change. https://t.co/fpoGbnNehm

Climate change: are China and Russia most at fault?

When the former president called out China and Russia, he wasn’t wrong to state that they are among the countries with the highest total emissions. China is the largest emitter, and Russia is the fourth.

However, it should be remembered that while China is the largest emitter of CO2, it is also the “workshop of the world” – the largest manufacturer of goods globally. When someone in the UK buys a computer, it is built and shipped from China, and most of the emissions of that process are tallied under China’s record.

If you take a look at China’s emissions per capita, this becomes a lot more obvious – by this metric, China is not even close to the emissions of the U.S, Australia and Canada. Obama should also note China’s impressive building of renewables over the past few years, with it having the world’s largest solar and wind capacity currently. It still has to go much further in its goals to reduce emissions, but this should be put into context.

Russia, on the other hand, has been notoriously slow to adopt good climate policy. Now, its aim of net-zero by 2060 is far too late, and it seems to be relying too much on its forests to absorb CO2. The lack of attendance from Putin and Jinping at COP, even though the countries are still involved in negotiations, is not going to improve their standing with fellow world leaders.

When it comes to climate, we do have to be careful with finger-pointing at specific countries. Of course, the wealthiest countries are the most culpable and the most able to fix the crisis, but there is a concern that countries simply blaming each other does not actually solve the issue. Too much of this could lead to eco-isolationism, rather than global cooperation.

Obama, the U.S. and the climate

Obama was certainly right to cast blame on the American Republican party. It is not an exaggeration to say that they have been a hugely destructive force when it comes to any climate legislation.

Starting with Ronald Reagan dismantling Jimmy Carter’s solar panels from the White House, to Trump exiting the Paris Agreement, the modern Republican party has become totally committed to blocking any climate legislation. While those on its right wing outright deny climate change (like Trump), even the most moderate of its members don’t believe in any real climate action.

Trump is obviously the one of the worst offenders, but it should not be forgotten that George Bush exited the Kyoto treaty, downplayed the climate crisis, and blocked data that showed an acceleration in global warming.

Criticism has been aimed at Democratic senators Kyrsten Sinema and Joe Manchin, quite rightly, for blocking the climate parts of Biden’s legislative bill. But we should bear in mind that the Republicans are almost unanimous in opposing this climate legislation. Every elected member of the Republican party, in the senate and the house, is complicit to some degree in obstructing our efforts to fight the destruction of the planet.

The Republican policy on climate is so bad that it actually has allowed the Democratic party to get away with a lot of inaction. And Obama is not blameless. In 2018, the former president took credit for the U.S. becoming the world’s largest producer of oil. And, like Bush, he fought hard against greenhouse gas regulation in his first term. Others, including Ugandan activist Vanessa Nakate, have noted that Obama made a very similar speech in 2009, while action has not progressed nearly enough in that time.

Obama is not off the mark on a lot of what he is saying in this speech, but he also reinforces the rhetoric that has already been heard: criticising a lack of real action, casting blame, calling for more climate funding. In light of this, it’s hard to imagine this speech bringing talks much further forward.

Editor’s Note: The opinions expressed here by Impakter.com columnists are their own, not those of Impakter.com. — In the Featured Photo: Barack Obama delivers a speech at the COP26 summit. Featured Photo Credit: Sky News (screenshot).

We Won’t Change to Save the Planet, in fact We Won’t Even Try

We Won’t Change to Save the Planet, in fact We Won't Even Try