The Publishing Industry in Support of the SDGs: Launch of the SDG Publishers Compact 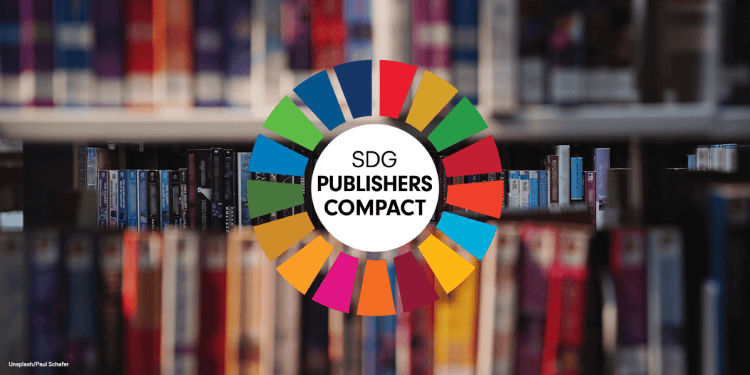 Today, 14 October, something special happened at the 2020 Frankfurt Book Fair: The SDG Publishers Compact was launched (SDG stands for Sustainable Development Goals). This is important first of all because of the venue: The Frankfurt Book Fair is the world’s largest and by far the most important book fair attended by vast crowds of publishers, literary agents, rights agents, editors, authors and journalists from all over the world. This year, though, for the first time in its long history, the Frankfurt Book Fair is entirely online because of COVID19. Still, despite the restrictions and difficulties, there are 4,400 exhibitors.

The SDG Publishers Compact is important for another reason. It comes as an unexpected and welcome boost to the United Nations Agenda 2030 for sustainable development that is now in its last decade of action. The Compact was jointly presented by Jurgen Boos, CEO of the Frankfurt Book Fair, Hugo Setzer, President of the International Publishers Association (IPA), Michiel Kolman, IPA Envoy for Diversity and Inclusion, together with Sherri Aldis, the UN Publications Chief whose website hosts the SDG Publishers Compact. From the German side, Nadja Kneissler, Chairwoman of the Publishers’ Committee of the German Publishers and Booksellers Association participated in the launch. Here is the video:

At the end of the video, all publishers are invited to find out more about the SDG Publishers Compact now located on the United Nations website (click here) and to join as signatories to the compact.

As explained on the UN site, those who join as signatories commit to “develop sustainable practices and act as champions of the SDGs during the Decade of Action (2020-2030), publishing books and journals that will help inform, develop, and inspire action in that direction.”

The compact consists of 10 action points that publishers, publishing associations and others can commit to undertaking in order to accelerate progress to achieve the Sustainable Development Goals (SDGs) by 2030: 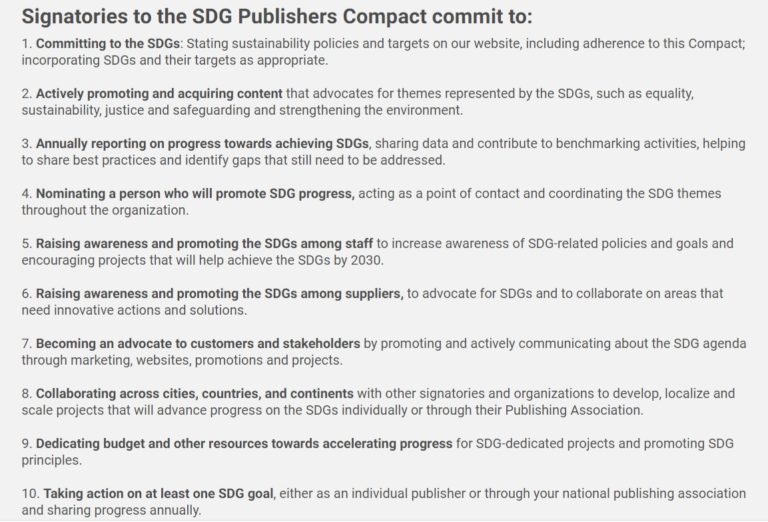 Like all UN commitments of this kind, the compact is voluntary and not legally binding. There is no fee to join. There is no deadline to sign the compact, but clearly, the sooner it is signed, the better. As noted in the FAQs, “the earlier we start supporting the goals together, the better the chances to accomplish them.”

Once a publisher has signed, next steps are simple enough:

(2) start addressing any of the ten commitments according to one’s company priorities.

Signatories are invited to let everyone know about their progress using the hashtag #SDGPublishersCompact on social media and to inform the UN about any SDG initiative taken by emailing at sdgcompact@internationalpublishers.org. Since the Frankfurt Fair is an annual event, the plan is to use that occasion to regularly check in with all signatories and hear about their progress. Expect more information to come in 2021.

The SDG Publishers Compact is similar to the SDG Media Compact launched by the Secretary-General two years ago, in September 2018. 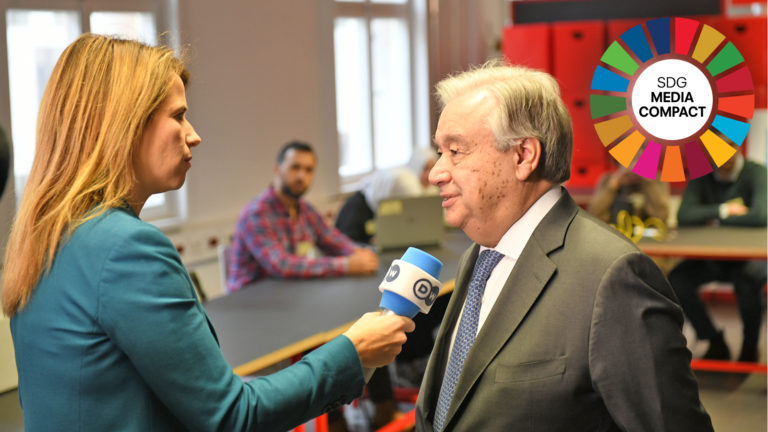 Today the Media Compact has more than 100 members reaching a combined audience of about 2 billion people in 160 countries across five continents. By disseminating facts, human stories and solutions, the Compact is seen as a powerful driver for advocacy, action, and accountability on the Sustainable Development Goals.

Notable among the Media Compact members: Sky Group, Europe’s leading media and entertainment company; ATTN: a digital publisher based in the United States; Shanghai Media Group, one of the newest members.

The Publishers Compact is the necessary complementary step, covering the publishing industry and should achieve the same goals.

The chances that they will come are good. The SDGs Publishers Compact has in the International Publishers Association, a key partner that can make all the difference.

Founded in 1896 in Paris, the IPA, with a Secretariat headquartered in Geneva, is the world’s largest federation of national, regional, and specialist publishers’ associations. Membership comprises 83 organizations from 69 countries across the world.

Through its members, IPA represents thousands of individual publishers around the world and services markets covering more than 5.6 billion people. Since its foundation, IPA has sought to defend the freedom to publish, which it views as a fundamental aspect of the human right to freedom of expression. Likewise, IPA stands for the promotion of literacy and reading. And it has always been a meeting place for publishers to network, exchange views and conduct business.

Now, with the launch of the SDG Publishers Compact, the IPA’s long-standing goals of literacy promotion and the freedom to publish are expanded to include support for the SDGs. This means giving a chance to the SDGs to become deeply embedded in people’s cultures. And that could be a game-changer.