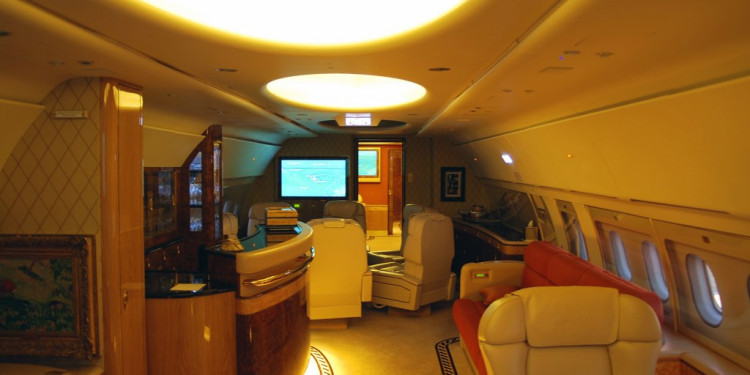 “The secret IRS files” is a trove of never-seen-before tax records showing how the 0.01%, billionaires like Warren Buffett, Bill Gates, Rupert Murdoch, and Mark Zuckerberg, actually get away with paying nearly no taxes. Just obtained from the US tax authorities by ProPublica, a non-profit newsroom that investigates the abuses of power, it is the first result of an ongoing investigation with assuredly more revelations to come. For the first time, we have indisputable evidence that the ultra-rich do not pay taxes that could be remotely considered as commensurate with their wealth or fair to the rest of the taxpayers.

This is all the more shocking if you confront the ProPublica finding with a report from Oxfam, published in September last year, that showed how the lifestyle of the rich destroys the environment: The One Percent – just 63 million people out of the planet’s total 7.9 billion – are responsible for 15% of the carbon emissions.

Let’s take a closer look at the findings. In so doing, I think we’ll end up agreeing with what historian Rutger Bregman, the author of Utopia for Realists, told a room full of billionaires at the Davos World Economic Forum 2019, that they need to “step up and pay their fair share of taxes”:

The data was obtained after ProPublica had published a series of articles scrutinizing the IRS, exposing how years of budget cuts have hobbled the agency’s ability to enforce the law and how the largest corporations and the rich have benefited from the IRS’ weakness. They also showed how people in poor regions are now more likely to be audited than those in affluent areas.

Every person whose tax information is described in the ProPublica report was asked to comment. Those who responded, including Buffett, Bloomberg, and Icahn, all said they had paid the taxes they owed.

Taken as a whole, says ProPublica, their investigation into the IRS secret files “demolishes the myth of the American tax system”: That everyone pays their fair share and that the richest people pay the most. The IRS data, on the other hand, indicate that the richest can – and do so in a perfectly legal manner – pay tax authorities only a tiny fraction of their immense wealth, which continues to grow year after year.

Billionaires like Jeff Bezos, Elon Musk, and Warren Buffet, among the richest people on the planet, pay income taxes to the American tax authorities that amount to a fraction of their enormous fortunes. Sometimes, nothing.

And to think that they are both busy trying to beat each other in an absurd space race, each launching rockets to outdo the other – and for Besoz, even planning a trip into space this coming July – while billions in the world are going hungry and the planet is on the verge of environmental collapse.

The ProPublica documentation, shedding much-needed light on the finances of the ultra-rich, is extensive, relating to the tax returns of thousands of rich and super-rich Americans. The data indicate not only the incomes and taxes of the super-rich but also their investments, including in the stock market and other exchanges, even their earnings from gambling winnings from websites like 해외토토.

But ProPublica didn’t stop there. To capture the financial reality of the richest Americans, they also undertook an analysis that has never been done before. They compared how much in taxes the 25 richest Americans paid each year to how much Forbes estimated their wealth grew in that same time period. And they called this their true tax rate.

Take Warren Buffett, the famous American centibillionaire. True, he has paid taxes every year – no doubt in line with his public stance as an advocate of higher taxes for the rich. According to Forbes, his riches rose $24.3 billion between 2014 and 2018. Over those years, the data shows, Buffett reported paying $23.7 million in taxes. That works out to a true tax rate of 0.1%, or less than 10 cents for every $100 he added to his wealth. 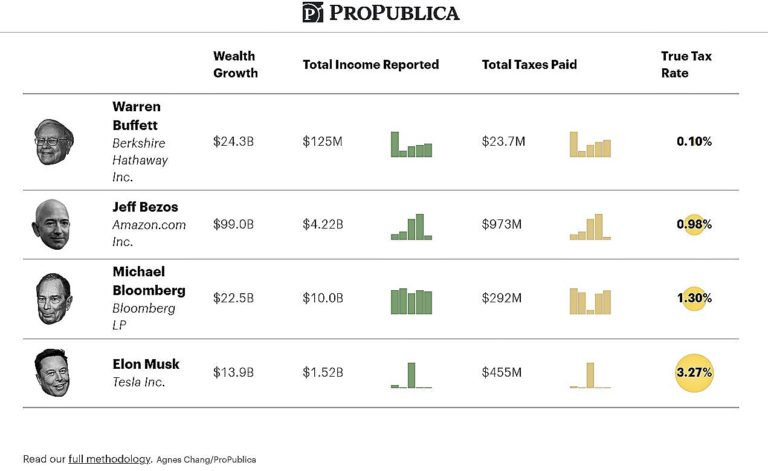 Consider how these low rates – from 0.10% for Warren Buffett to 3.27% for Elon Musk – compare with the tax rates paid by the rest of us: In recent years, the median American household earned about $70,000 annually and paid 14% in federal taxes. The highest income tax rate, 37%, kicked in this year, for couples, on earnings above $628,300.

The reality is deceptively simple: America’s billionaires avail themselves of tax-avoidance strategies that are unavailable to ordinary people.

And of course, what is true of American billionaires is true of billionaires everywhere. And with the pandemic, there has been a reported 10% surge in billionaires’ wealth – probably a number well under the reality. So we can expect an equivalent surge in unpaid taxes.

Yet the One Percent Pollutes the Most: It Accounts for 15% of GHG Emissions

Adding insult to injury, the rich are those – as a group of people – most responsible for polluting the environment from 1990 to 2015, a critical period in which annual emissions grew 60% and cumulative emissions doubled.

The richest 1% (about 63 million people) alone were responsible for 15% of cumulative emissions over the period, and 9% of the carbon budget – twice as much as the poorest half of the world’s population. The poorest half (about 3.1 billion people) were responsible for just 7% of cumulative emissions and used just 4% of the available carbon budget over the same period. 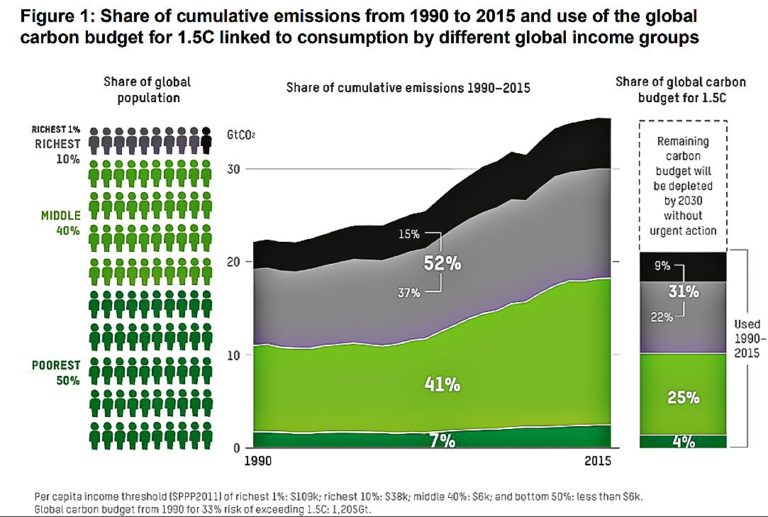 The Oxfam report also notes that restrictions related to the pandemic saw global emissions fall in 2020. But, as they put it, “unless emissions continue to decline rapidly, the 1.5C global carbon budget will be fully depleted by 2030.” But the “inequality is such that the richest 10% alone would fully deplete it by just a few years later, even if everyone else’s emissions dropped to zero tomorrow.”

In any case, now that we are slowly moving out of the worst of the pandemic – at least in the rich countries – emissions have started again. So don’t expect any remission in the relentless pace towards full depletion of the carbon budget.

The Oxfam report’s conclusion is stark:

Over the past 20-30 years, the climate crisis has been fuelled and our limited global carbon budget squandered in the service of increasing the consumption of the already affluent, rather than lifting people out of poverty. The two groups that suffer most from this injustice are those least responsible for the climate crisis: poorer and marginalized people already struggling with climate impacts today, and future generations who will inherit a depleted carbon budget and a world accelerating towards climate breakdown.

What the Oxfam report did not say – it was beyond its remit – is that the “already affluent” is not even paying its fair share in taxes. Meaning that government services for the vast majority that need them and cannot pay for them the way the rich can – from public health to social security – is irremediably hobbled. As to the fight against climate change and efforts to save the environment, they inevitably receive whatever little is left in government coffers, if anything.

Is this the kind of world we want? Even the ultra-rich may want to think twice before forging ahead with a business-as-usual agenda.

How to Make Agriculture Carbon-neutral: Lessons from Denmark

The Disparity Between Climate Commitments and Clean Energy Spending

The Disparity Between Climate Commitments and Clean Energy Spending