Something Is Brewing in Guatemala: It’s Bold, It’s Strong 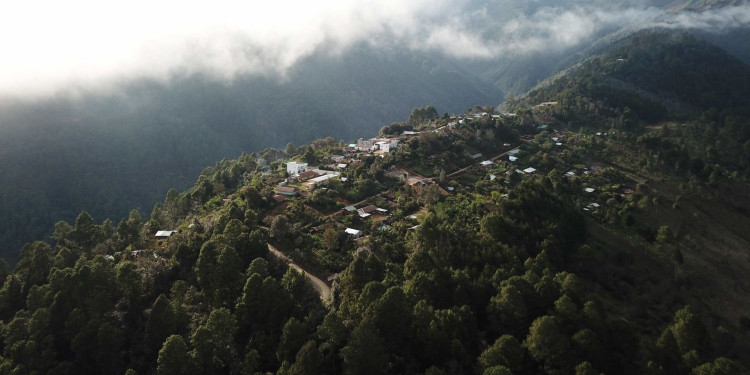 If Central America were China, then Ixil would be its Tibet. It’s hard-to-reach and therefore has been protected and able to flourish as a Mayan Heartland for millennia. Hundreds of hamlets separated by endless peaks and recesses of fertile land are connected by a triad of villages called Nebaj, Chajul and San Juan Cotzal. It is here, in these northwestern highlands of Guatemala where Barefoot College has settled its Coffee Livelihood Program.

Perhaps it was Ixil’s abundance of fresh water, forests, and ideal climate for agriculture which helped them survive exile in the forests. Early in the 19th century, this rich region inspired Guatemalans to take advantage of the environment, accumulating large swaths of land for cash cropping coffee and hydro dam projects.

About one decade after Ché began his motorcycle diaries, early 1960s, the Ixil region became the headquarters for the Guatemalan civil war led by its military dictatorship. The violence lasted for 36 years before a peace treaty was finally signed. During the sustained decades of destructiveness, many Ixil fled to the mountains to evade persecution and brutality. Fleeing civilians were bombed or confronted with aerial assaults, scorched-earth tactics decimated up to 90% of all Ixil villages and over half of the total Ixil population were killed.

After the fighting finally seized, there was little left to recover. The government’s assistance post-war was, and remains, virtually non-existent, and the wounds from the aftermath stem deeper than the witnessed trauma of the affected communities. Many loved one’s bodies were never retrieved, and traditional knowledge and oral history were lost.

I was the youngest of my brothers, 11 years old when the war came to us. We lived in my father’s house in Nebaj. My older brothers would take turns staying up at night to listen for the army because if they found you they’d kill you. It wouldn’t matter if you were a child, woman, or pregnant. They came, and I escaped with my mother. Like most of us, we ran to hide in unreachable places like where we are here, in Xecotz.

Today this amounts to immense struggles in the small communities, who work tirelessly to salvage their heritage and sustain their way of living as it now functions. Their conditions, postwar, have produced some difficulties with psychosocial health but their perseverance in the face of recent massacre is awe-inspiring, especially considering the statistics they’re currently up against.

Statistics are one thing, action is another; the Ixil people are restoring their lives despite their misfortunes, and it is their women who are leading the way. Juana de Leon, an Ixil woman, has been earning a substantial source of livelihood and opportunities for her community. In collaboration with Barefoot College, she manages local coffee growers, helping them to earn dignified wages while managing the land in a responsible and renewable manner.

In the Northwestern Highlands village of Xecotz, Juana chose to proceed down an unlikely path. Taking a large risk and following her dreams, she pursued a bachelor’s degree in education, earning a background in logistics. She is a rare example of an Ixil-born, educated woman, who at only 24 years of age is witnessing the fruits of her labour. Most women her age have two children, yet Juana has chosen to have none, and instead is the only perfectly bilingual and literate woman in the entire village.

She gathered other women farmers and has been establishing the B.Barefoot Coffee Enterprise, building value chains that provide fair-trade organic coffee farmers equitable pay that’s well above wages of the average statistic.

In fact, Ixil farmers who work under the B.Barefoot Enterprise earned 36% more in 2018 than they did in 2017. This was a time when the NYSE coffee index was at an all-time low. While the average coffee grower suffers at the unpredictable fluctuations of a too-often volatile market, the B.Barefoot coffee enterprise has been expanding.

While the project seems to revolve around coffee, Barefoot’s Coffee head, Lawrence Miglialo says, “Coffee is a spearhead, used to arrive at a target that reflects the needs of a subsistence farming community: become profitable with agriculture while protecting and restoring soils, water and ecosystems.”

Farmers are enrolled in B.Barefoot’s Coffee Livelihood Workshops that are held exclusively for women, teaching them skills that give them the freedom to manage and work autonomously, often for the first time in their lives. There are currently over 11 modules that build skills in sustainable agriculture and business mechanisms that go beyond just farming procedures. Theory sessions cover a small portion of the B.Barefoot Livelihood Curriculum, Lawrence says, adding that, “Most farmers have never seen a photo of the Earth from space. So we use multimedia to learn about the geography behind coffee’s journey from Ixil mountain ranges to the places they have only heard about like Germany or United States.”

Many Ixil know how to farm organically, they’re very proud of the wisdom they’ve inherited from their ancestors and stand by its quality; however, when a global market doesn’t match the farmers’ costs to grow responsibly, we all pay.

“We pay the farmers of B.Barefoot well above the NYSE index for coffee,” says Tim Reher, founder of Shangri-La Artesenal Coffee Roaster, “ … because that number is based on supply and demand, not on the real needs of the people and the ecosystems from which we all depend.”

People and businesses like Tim’s roaster are supporting the B.Barefoot farmers because they have a commitment to preserve and revive the sacred spaces of our planet. They also take part in the more practical and hands-on modules of the curriculum by inviting the farmers to learn about their space in the coffee value chain.

In a society that has long left men in charge of the workforce, Juana’s success has become recognized and respected by the members of her community. For local women, formal schooling has become an attractive, viable option. Juana is inspiring other women of her community to gain such autonomy for themselves, as living proof that being educated (and unmarried) becomes profitable in the long run.

Delivering better-than-fair profits against a market that is often volatile and completely out of the control of coffee farmers ensures that economic growth will continue in a stable and predictable manner. This adds comfort to the lives of locals who are too often at the mercy of capitalism’s fluctuating tendencies. It addresses the 8th Sustainable Development Goal, offering decent work that drives the local economy.

Employment of the Ixil women allows them to become empowered and more respected locally, breaking gender barriers while offering them a chance to have education where previously the opportunity was not available. Women, who are far more likely to remain living in their communities rather than move to the nearest city for work, choose to take the knowledge they acquire and spread it throughout their communities.

The infamous McKinsey study reveals that gender inequality causes a moral, social and economic strain on communities. When women become equally incorporated into societies, they begin to function in a much-improved capacity. Through the involvement of more women in the global market, the world’s GDP would rise by an estimated $28 trillion by 2025.

The pattern of wealthy coffee growers expropriating land from local residents carried on well into the 20th century and remains an ongoing issue. In fact, around 90% of the land in Guatemala today is owned by elites, while locals often resort to renting out land for their own livelihoods.

Using the excess profits gained through coffee sales, B.Barefoot is actively approaching wealthy landowners to gradually buy back lands that were taken for cash mono-cropping. The land is then given to our landless coffee-growing villagers in order for them to no longer rely on renting out land for their livelihoods and especially for their own subsistence. By helping to cease the cycle of poverty, this addresses the first Sustainable Development Goal.

Because B.Barefoot upholds strict policies regarding USDA organic certification, those farmers who are actively maintaining healthy soils and crops are rewarded for their efforts compared to their non-organic neighbours. In the village of Xecotz, only six families out of 60 practise USDA organic standards. The other families who are rejected for using chemicals and deforesting witness the partnership that the organic farmers benefit from with B.Barefoot and are becoming motivated to convert to sustainable farming.

Some farmers have sought our assistance to make the transformation happen, and we have worked with them on making the switch a success. This pivot toward responsible consumption and production addresses the 12th Sustainable Development Goal.

Aware that carbon footprints don’t stop at the management of growing and harvesting, Barefoot College is also working with three popular Guatemalan distributors, helping them to brand new self-serve counters at their locations. This is the first partnership of its kind in the country, and in 2019 alone is estimated to eliminate the senseless consumption of hundreds of plastic bags.

Around 2,000 lbs of green coffee have been sustainably harvested and fairly sold, over performing the NYSE Coffee index by 22% in 2019, already a 67% increase from its previous year. In fall 2019, the project aims to increase its beneficiaries by 30 women and one village per year.

The work has spread to three Ixil villages and has already proven that such projects are successful in their mission, empowering remote villagers in a manner that allows them to take control over their own situations to thrive.

Consumption of coffee is estimated to double by 2050, and 60% of the cultivatable land is found under forests. Whether or not anthropogenic climate change is real, B.Barefoot aims to provide consumers with coffee that preserves and revives the sacred and biodiverse ecosystems, while providing resources to the forgotten refugees of Ixil so that they may resurrect as agents of sustainable change.

So tell us, how will you take your coffee?

Editors Note: The opinions expressed here by Impakter.com columnists are their own, not those of Impakter.com  — In the Featured Photo: Village of Xecotz, population ~800 — Featured Photo Credit: Lawrence Miglialo/Barefoot College

Cassie is a communications specialist and photojournalist for Barefoot College, dividing her time between being on the ground in India and in her home country, Canada. Her past work and interests include food sovereignty initiatives, regenerative agriculture, sustainable landscaping, natural building techniques, writing and activism. She is an advocate of food for thought and food as thought, asserting that both