A Stitch in Time – The Patagonia Principle 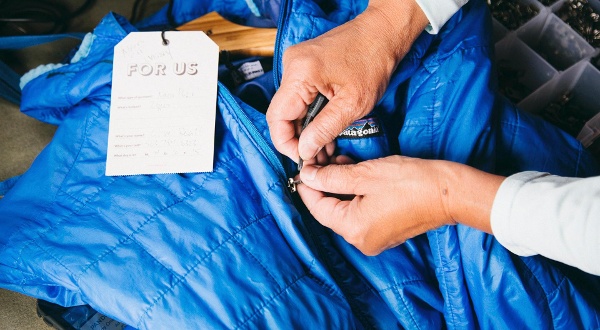 “Only on the fringes of an ecosystem, those outer rings, do evolution and adaptation occur at a furious pace; the inner center of the system is where the entrenched, non-adapting species die off, doomed to failure by maintaining the status quo. Businesses go through the same cycles.” – Yvon Chouinard, Let My People Go Surfing

The decade beginning 2008 makes for an extremely interesting time period in which to study the way businesses adapt to change. The current generation of consumers around the world have witnessed arguably the most volatile socio-economic, political, and environmental scenarios in recent history: a global recession, emergence of rapidly growing Asian markets, and most importantly, renewed movements urging businesses and individuals to address climate change.

Until a few years ago, it was inconceivable to picture a company that would donate 100 percent of its Black Friday sales towards environmental conservation; or one that would actively appeal to its customers to buy less of its products. Amidst the myriad companies that are attempting to adapt, there is a maverick that has taken the bull of change by its horns by doing, and acing, the inconceivable – Patagonia. 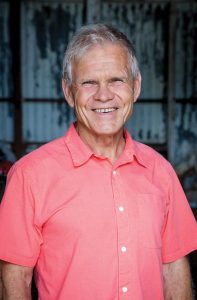 Over the years, Patagonia has cultivated a strong and loyal customer base in the outdoor apparel space. That the company ‘walks the talk’ when it comes to being environment-friendly is not only visible, but also inspirational to the point that it has become the benchmark for other apparel companies. A closer look into the evolution of Patagonia’s messaging and activism reveals a deep-seated ethos centered around preservation and genuine love of nature. Patagonia Founder Yvon Chouinard’s goals and values for the company greatly resonate with its target customers and senior leadership alike. Be it in the corporate boardroom, or in a case competition with young students, or on Twitter, Patagonia CEO Rose Marcario is known to frequently echo the company’s single-minded mission of using business to better the environment.

One such passionate leader at Patagonia is Rick Ridgeway, Vice President of Environmental Affairs. An experienced mountaineer, adventurer and nature lover, Ridgeway notably led the formation of the Sustainable Apparel Coalition, a group of companies that produce more than a third of the clothing and footwear on the planet. The Coalition has launched an index of social and environmental performance to make better decisions when developing products or choosing materials.

In an interview with Ridgeway, I uncovered the motivations behind Patagonia’s efforts towards sustainable apparel, and explored the impact that the company’s actions have created across its value chain.

How did the idea of donating all proceeds from Black Friday germinate? What was the trigger?

Rick Ridgeway: During this difficult and divisive time, we felt it was important to go further and connect more of our customers, who love wild places, with those fighting tirelessly to protect them. The idea to donate 100 percent of global sales was conceived after the election because we thought it more important than ever to advocate for the planet. 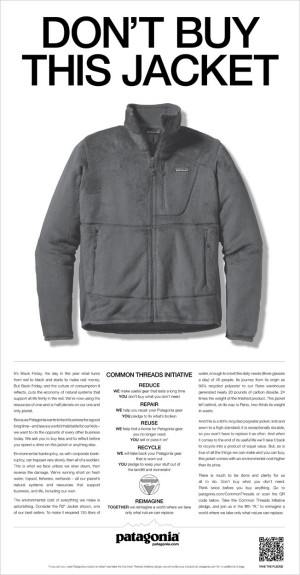 Since its inception, Patagonia has creatively, yet effectively, called for its customers’ attention to highlight a range of issues on multiple occasions. On Black Friday of 2011, Patagonia’s famous “Don’t Buy This Jacket” campaign splashed the New York Times amidst a sea of discount-messaging by other retailers, taking the country by surprise. The campaign was the company’s head-on response to consumerism. More recently,   Patagonia closed all of its US stores, and even its headquarters, on Election Day (Nov 8, 2016). The decision, taken by the company as part of its Vote Our Planet initiative, was driven to to encourage customers, employees and citizens to go out and vote.

In the photo to the left: Patagonia’s Advert in the New York Times

Every apparel company endeavors to sell more and more to its customers. Patagonia is very unique in this regard, wanting its customers to not have to buy a product more than once. How has this approach redefined success for the company?

One of the most responsible things we can do as a company is to make high-quality stuff that lasts for years and can be repaired, so you don’t have to buy more of it. As individual consumers, the single best thing we can do for the planet is to keep our stuff in use longer. This simple act of extending the life of our garments through proper care and repair reduces the need to buy more over time—thereby avoiding the CO2 emissions, waste output and water usage required to build it. We define the quality of our company, in part, by the degree to which we can reduce our impact on the environment.

The key themes surrounding Patagonia’s sustainability efforts in its supply chain (comprising nearly 75 factories and more than 100,000 workers worldwide) are fair trade, animal welfare, greener material, and reuse – all of which emphasize a strong regard for resources. Patagonia is the largest supplier of apparel manufactured in Fair Trade Certified™ facilities – where workers are safe, treated with respect and paid fair compensation for their labor. Be it down or wool, the company has taken stringent measures to ensure utmost care in the manner of sourcing its animal-based raw material. Patagonia ensures that birds are not force-fed or live-plucked for its down products by tracing the source from farm to apparel factory, and has also instituted the Patagonia Wool Standard focusing on better nutrition for animals, land management and traceability among other factors. In a strong push for greener inputs, Patagonia produced the world’s first and only neoprene-free wetsuits made with natural rubber. The company also recently launched their exclusive ‘re\\\collection’ , which incorporates experimental design to reuse landfill waste (zippers, buttons, wool etc.). In addition, the company is running a campaign encouraging customers to repair their worn items instead of tossing them to buy new ones.

Patagonia has been a champion activist for a range of causes. How does Patagonia choose and prioritize the causes it associates itself with?

R.R.: Patagonia is most interested in making grants to organizations that identify and work on the root causes of problems and that approach issues with a commitment to long-term change. Most of this work happens in the environmental space, but it also applies to other social justice causes such as Planned Parenthood and Fair Trade. Because we believe that the most direct path to real change is through building grassroots momentum, our funding focuses on organizations that create a strong base of citizen support.

Patagonia prides itself on being ‘The Activist Company’ – and rightly so, as it has been the flag-bearer for numerous environmental campaigns and partnerships. It has been an active member of at least 9 known corporate alliances including 1% for the Planet, donating over 74 million USD to conservation efforts by grassroots organizations.

In response to recent developments enforced by President Trump, Patagonia has been one of the loudest voices calling for a strong Environmental Protection Agency (EPA) in today’s turbulent regulatory situation.

The company has also used the medium of short films to draw attention to socio-economic issues arising from environmental damage. In partnership with non-profit conservation group Alaska Wilderness League, Patagonia released a short film titled “The Refuge”, which tells the story of two Gwich’in women fighting to preserve their ancestral home and the survival of the wild animals that bring them life. Another film financed and promoted by Patagonia, “Jumbo Wild”, presents the issue of commercializing British Columbia’s Jumbo Valley against the interests of the region’s pristine environment and its First Nation tribes. 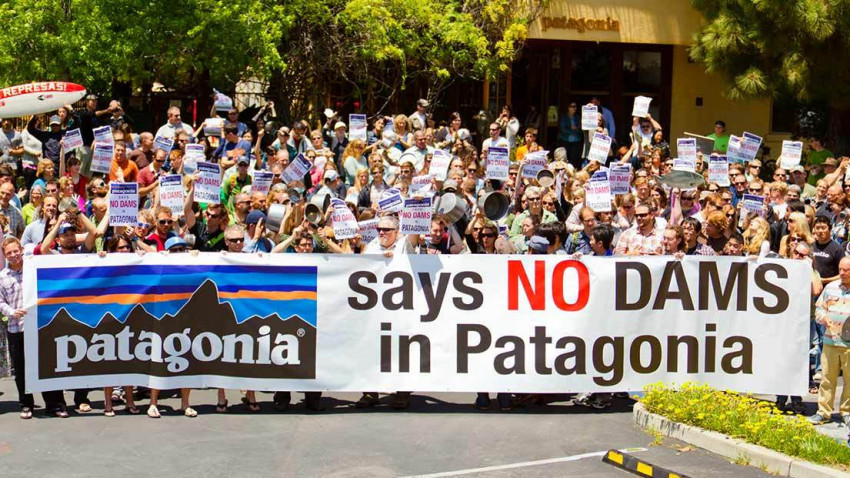 What message does Patagonia have for apparel companies who believe that sustainable sourcing/manufacturing/selling only comes at the cost of sacrificing profits?

Patagonia’s mission statement reads: “Build the best product, cause no unnecessary harm, use business to inspire and implement solutions to the environmental crisis.” To understand how best to prioritize our efforts now and in the future, Patagonia is presently guided toward 2050 by a concept called Planetary Boundaries. Developed by the Stockholm Resilience Center and based on the research of 28 internationally renowned scientists, Planetary Boundaries sets out nine precautionary boundaries for critical areas of change, including climate change, ocean acidification, land-system change, biosphere integrity and others. We are using this framework to identify what is most material to our business, where we have the most influence, and where we can best affect change. It will guide what we should be doing as a business to mitigate human-driven environmental change.

It is hard not to wonder how Patagonia has managed to achieve double-digit growth while pressing as hard as it does on issues that big companies seldom stake their profits on. The answer, perhaps, lies in having that clear sense of purpose the company has instilled in itself.

As I sat amidst an audience of the brightest students from around the country at the inaugural Patagonia Case Competition in 2016, I realized how Patagonia has, over the years, redefined the term ‘Business As Usual’ for companies. Marcario’s message on that day, to future business leaders of the world, was loud and clear – “We’re not being responsible with the planet that we live on. And if business is creating this pollution, business has to be responsible to fix it.”

EDITOR’S NOTE: THE OPINIONS EXPRESSED HERE BY IMPAKTER.COM COLUMNISTS ARE THEIR OWN, NOT THOSE OF IMPAKTER.COM. FEATURED PHOTO CREDIT: PATAGONIA

Prerana Manvi is a Product Owner and Sustainability Ambassador at Amazon. She holds an MBA from UNC-Chapel Hill, where she served as a Leadership Fellow at the Center for Sustainable Enterprise, and was the President of Net Impact MBA chapter. She was previously a Senior Sustainability Consultant at Goodera, authored articles for Forbes on India’s two-percent CSR law, and worked to develop and execute sustainability programs for some of India’s leading corporations. 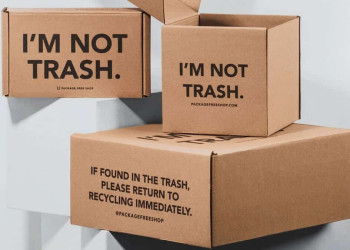 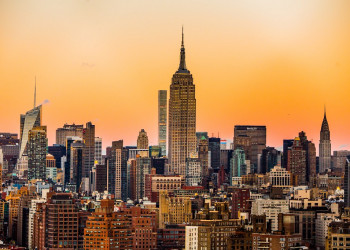 Working At The Intersection of SDGs And Business: 17 Asset Management