Struggle and Sustainability Along the Louisiana Gulf Coast 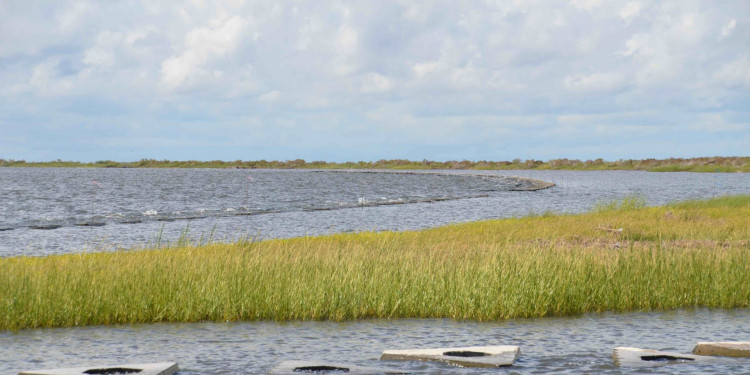 In 2018, studies showed that 51.3 million domestic and international visitors traveled to Louisiana. In addition to the festivals and rich culture, Louisiana’s unique environment and culinary traditions are major attractions. Louisiana also holds the second largest commercial fishing industry in the U.S., following Alaska, and produces approximately one-third of the nation’s oysters.

However, Louisiana is currently experiencing a coastal crisis. Many in Louisiana eschew the words “climate change.” But whether those in the state admit it or not, it’s a problem and it affects Louisiana jobs, the oyster, shrimp and fishing industries, generations of coastal residents, traditions, the economy, and the thriving tourism industry.

Because of complex problems such as shoreline erosion, roughly 16 square miles of Louisiana’s coast are lost each year, representing 80 percent of the total coastal wetland loss in the entire continental United States.

Approximately one American-football field of land disappears into the Gulf of Mexico every 100 minutes. For thousands of years, the fresh waters and sediment from the Mississippi River helped to build marshes and wetlands. But because of man-made canals, levees, and a “super-highway” channel constructed in the 1950s and nicknamed Mr. Go (MRGO – Mississippi River Gulf Outlet) constricting the path of the river, sediment was not able to reach the coast in order to replenish the silt, resulting in extreme erosion levels. During Hurricane Katrina, Mr. Go created a devastating funnel surging water into the surrounding communities and wreaking catastrophic destruction. Closure of the channel was finally completed in 2013. But it is estimated that, since 2014, about 350 million tons of sediment from Louisiana riverbanks have been lost. In addition, hurricanes, oil spills, climate change, rising sea levels, levees, subsidence, and human impact have had detrimental effects.

Continued land loss threatens up to $7.6 billion a year in direct costs to the nation’s economy and billions more in potential indirect costs.

In January 2020, President Trump weakened federal environmental waterway and wetland pollution protection policies. While there is still some confusion regarding which waterways will suffer under those new policies, the Mississippi River is one of them. Federal regulations are necessary to help curtail fertilizer runoff. The influx of pollutants in the Mississippi River, mainly from fossil fuels, wastewater, and farm fertilizers in the Midwest, has produced a hypoxic dead zone in the Gulf of Mexico, a low-oxygen area contributing to the death of marine life and estimating a cost to the state of around $82 million/year. The new policy threatens wildlife, drinking water, the fishing and seafood industries, and more. But it’s complicated, and because the issues affect multiple parties, it could be nearly impossible to appease everyone.

It’s unlikely that any plan will make all stakeholders content. Projects that impact resources — whether they be fish stocks, flood protection, wildlife resources, etc. — frequently involve many stakeholders with competing or conflicting interests. Managing resources between individuals or stakeholder groups, and between present and future generations will inevitably lead some groups to perceive that they have lost.

However, despite the damage, risks, conflicts, and budgetary constraints, Louisiana and others within the state are working diligently to rectify the situation. In 2017, Louisiana’s Coastal Protection and Restoration Authority (CPRA) developed the Comprehensive Master Plan for a Sustainable Coast, a 50-year plan allotting $50 billion to 1) Structural Risk Reduction 2) Marsh Creation 3) Nonstructural Risk Reduction 4) Sediment Diversion 5) Barrier Island Restoration 6) Shoreline Protection 7) Hydrologic Restoration and 8) Ridge Restoration. Overall it includes 79 restoration projects, 13 structural protection projects, and 32 risk reduction projects. And altogether, they are projected to reduce expected coastal damage by $8.3 billion per year. If no action is taken over the next 50 years, another 2,250 square miles could be lost.

One of the projects includes diversions, which reallows the Mississippi River to deposit sediment to the delta and surrounding marshes. This is critical for rebuilding the land, which is essential for wildlife preservation and carbon storage. But some of those affected do not approve of the diversions because of the long-term goals rather than short-term remedies as well as the economic concerns to the fish and seafood industries.

Many are also concerned about pollution from the river and the influx of a slimy toxic algal bloom. This affects the fish, seafood, and more. Although the Mississippi-based company Algix has been successful in creating commercially viable bioplastics from algal bloom. This could be one possible solution to help reduce the toxins in the river and local waterways.

Another measure of the Master Plan includes the restoration of barrier islands, which act as fundamental buffers for land and wildlife protection, especially when hurricanes hit. Louisiana and state organizations are consistently researching solutions. And according to Stuart Brown of CPRA, they are always open to new ideas.

There are a number of innovative programs evaluating different techniques and products to help restore and maintain coastal wetlands. Some are sponsored by the state, some by universities, and some by private industry.

Louisiana is a prime spot for carbon capture – extracting carbon dioxide emissions from the atmosphere and storing it underground – which the state is currently working on. Via a study by the Climate Trust, Entergy Corp., and Tierra Resources, based in New Orleans, carbon credits like those of the Cap-and-Trade Program in California, could bring in $1.6 billion for coastal restoration in Louisiana.

Despite several lawsuits against the oil industry, some oil and gas companies have also thrown their hat into the ring and partnered with restoration projects. In addition to their current contributions, according to CPRA, another helpful solution by the oil and gas companies would be to remove decommissioned pipelines to help facilitate restoration projects and continue to fill old pipelines and access canals to help restore local hydrology.

Louisiana’s coastal erosion issues are dire, and immediate steps must be taken. Fortunately, Louisiana and additional organizations are taking strides to find sustainable solutions. One 2019 study by LSU (Louisiana State University) professor Kristine DeLong reviewed the changes in coral reefs within the Gulf of Mexico, affected by global warming and indispensable in preventing the rise of storm surges. Oyster reef restoration is another viable option to help protect against coastal erosion and provide valuable habitats for both marine life and the fishing industries. The Coalition to Restore Coastal Louisiana has, since 2014, collected 4,581 tons of oyster shells through their Oyster Shell Recycling Program. Oyster shells are collected from New Orleans-area restaurants and then distributed to the coast to construct oyster reefs along the Gulf Coast. Some also contributed to the aquaculture program carried out by the Louisiana Department of Wildlife and Fisheries. Sea Grant, an affiliate of LSU, is home to the largest oyster research lab along the Gulf Coast, which includes a commercial-scale larval rearing system, a seawater filtration system, nursery silos for seed oysters, and an algal production system.

During the February 20 press conference, Louisiana Governor John Bel Edwards named Charles Sutcliffe as Louisiana’s first chief resilience officer and announced that the state will receive its maximum payment from the Gulf of Mexico Energy Security Act (GOMESA). At least $115 million in state surplus dollars will also be attributed to the coastal fund raising CPRA’s 2021 fiscal year expenditures to over $1 billion for the first time in Louisiana’s history, and $43 million will be available to the Oyster Resource Plan targeting rehabilitation initiatives.

Over the next four years, @LouisianaCPRA will be investing nearly $1 billion per year in the implementation of some of the most important projects in the Coastal Master Plan. #lagov #lalege

There are still big challenges ahead and a lot more work to be done in order to protect Louisiana’s way of life, of past traditions and that of future generations. But at the moment, Louisiana is leading the country in coastal science and management. Last year, the state approved a Coastal Technical Assistance Center at Nicholls State University, similar to the Center for River Studies on the LSU campus, to further the area’s restoration research. Justin Ehrenwerth, president and CEO of the Water Institute of the Gulf encourages everyone to look at the river from a holistic perspective and to take the best available science and use it to create effective decision making.

To close out the February 20 press conference, CPRA Chairman Chip Kline quoted Governor John Bel Edwards, “This is our moment, and this is our time, to address coastal restoration and hurricane protection in the state in a way that we have never done before.”

The world is watching what we do here in Louisiana.

From Louisiana and Seattle to New York and Paris, Anne-Julia has worked as a writer, editor, and translator for over 10 years. Recently completing an M.A. in English/Professional Writing, she is also fluent in French and passionate about fostering global ethics and international relations.