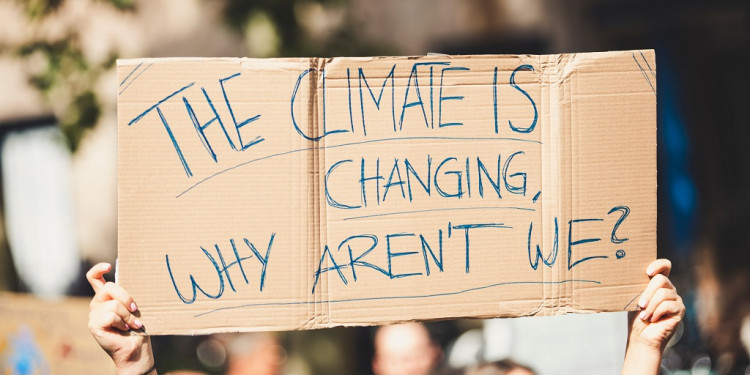 As we welcome a new decade it’s time to recognize that “we the people” will need to be the ones to solve the climate crisis.

The Big Question Regarding Change is How?
How can hundreds of millions of people unite and build a movement for massive social and economic change? How do we combat a steady stream of misinformation from the status-quo- protecting corporate media? How do we sell the idea that the very way in which we’re organized around commerce and ecosystem protection are in conflict – and nature is losing?

How do we convince millions of people that we need to instantly give up many of the conveniences that we’ve come to rely on in order to prevent something that we can’t see and that will happen at some point in the future? How should we organize to demand a climate-stable future?

We need to clearly state the disease that we are fighting and shed the false narrative that the system is too big to change.

The forces that organized our society have lulled us into a trance and convinced us that they are stronger than they actually are. They want us to think that the wasteful capitalist system is set in stone and that we are powerless to change it. They want us to think that the structure of the system is fine and that we should focus on tinkering around the edges.

Let’s use the analogy of an eggshell. We need to break open the deception from wherever we have influence. Some will work from the outside smashing at the eggshell and some will do the same from the inside and with consistent force and determination, we will break through and gain control of the ecosystem destroying corporate neoliberal narrative.

This isn’t really a step as much as it’s an overall theme. We can’t let them divide us. We must avoid infighting and find that broad common theme that will unite us all – perhaps climate justice is the far-reaching concept that will keep us working together.

We need to reconnect with the greatest attribute that humans possess, our ability to organize and cooperate on an enormous scale. In peaceful times think of the Panama Canal, Hoover Dam or the Space Station and of course, we know about the giant global mobilization of WW2.

The idea of capitalism’s individual selfish pursuit of one’s goals has failed us; it’s eroded our sense of society and turned us into mindless consumers while killing the planet’s ability to sustain us. We must evolve from these ideas and courageously focus our energy towards our greatest challenge.

Step 4 – Keep up the Pressure

There are already incredible initiatives that are taking place around the world and each one needs to be supported and intensified. Our efforts not only need to demand an immediate reduction in emissions but we must also call out the disease – “wasteful, unregulated, fossil fuel subsidized, media glorified and wealth concentrating capitalism.”

We must call out both corporate and government leaders who are stalling progress towards a climate stable future. We must make sure that decision-makers wherever they may lurk, are hounded and pressured to loosen their stranglehold over the broken system and protect our climate. We must demand that those with wealth and power release our democratic system from their corrupting grasp.

We must call out philanthropy for what it is – a distraction by the elite to throw off regulators and journalists who may be thinking about taking a closer look at how the corporate elite accumulated their wealth at the expense of society. We must demand that the ultra-rich who have shaped the broken system for so long, dig deep into their “system-enhanced fortunes” and provide an oversized contribution to help finance the transition to a new climate-stable economic model. The financing for this should not come from the working poor or those who are only hanging onto the struggling middle class.

Some notable efforts in bringing pressure to the climate crisis are:

Unfortunately, these efforts while increasing awareness and educating great numbers of people, aren’t leading to the massive regulatory response needed. Most changes leave the system in place and are incremental at best…and that just won’t do – we still have the same problem. How do we shake the system hard enough to force it to implement massive regulatory changes?

How to Get your workplace ready for Coronavirus – WHO Rules