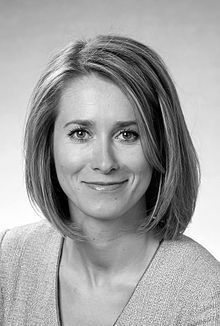 Kaja Kallas is an Estonian politician, Chairwoman of the Reform Party and a former Member of the European Parliament (MEP), part of the Alliance of Liberals and Democrats for Europe.

She has previously worked as an attorney-at-law, specialised in European and Estonian competition law and been a Member of the Parliament of Estonia (Riigikogu).