Ten Billion People by 2050 Could Pose a Challenge for Peace 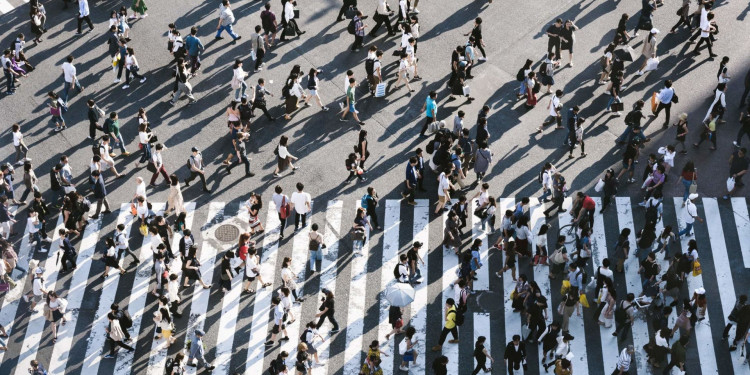 Projected high levels of population growth will collide with issues of resource scarcity and ecological threats in the future.

By 2050, the global population is projected to reach nearly ten billion people and could challenge levels of peacefulness around the world.

Projections indicate that the populations of regions such as North America and Europe will decrease, while that of sub-Saharan Africa and South Asia will grow substantially. Sub-Saharan Africa is particularly vulnerable due to rapid population growth and food insecurity issues, with 14 countries projected to double their population by 2050. 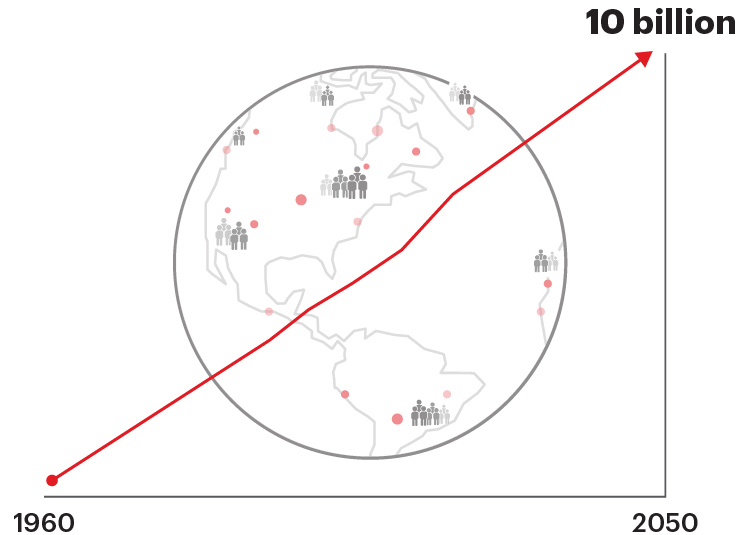 For example, Niger is projected to have the largest percentage increase in its population, increasing almost threefold. The level of population growth in Niger will outpace economic development, leading to a decline in living standards and greater completion for economic resources. Between 2020 to 2050, Niger is estimated to record a population growth rate of 3.4 per cent each year — the highest rate of any country. This is followed by Angola, which is estimated to average a 2.9 per cent annual population growth rate. The global average will be 0.74 per cent, which is significantly less than Niger and Angola.

Food insecurity, defined as uncertainty in access to a sufficient quantity of food necessary for a healthy life. The global number of food insecure people has been on the rise, increasing by 300 million people since 2014. Of the two billion people in the world who are currently food insecure, around 700 million experience a more severe form of food insecurity. This means the individual has to skip meals or go without food for an entire day. This form of food insecurity has adverse consequences on an individual’s physical and mental health. Economic productivity is also affected. When large proportions of a country’s population are severely and regularly food insecure, a country’s economic development is stifled. 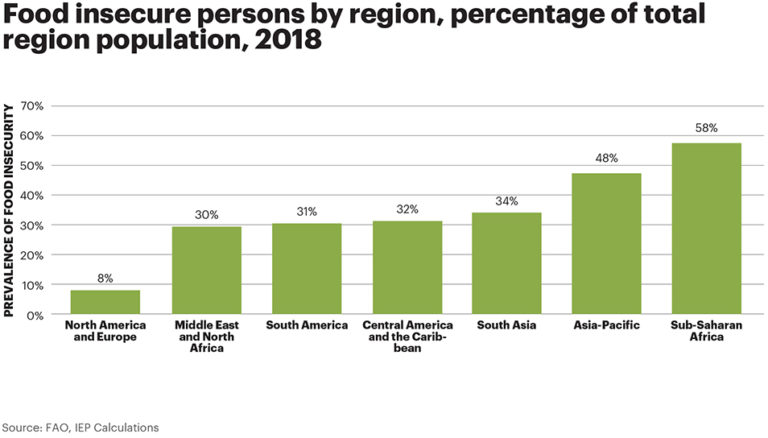 Food insecurity can be a direct result of violence, conflict or political instability, but food insecurity can also be a trigger to and stressor of social tensions. Conflict, extreme poverty and severe food insecurity interact in systemic ways by generating negative feedback loops. This is where social order deteriorates continuously, along with the food and water resources.

Yemen is an example of the interaction between conflict, extreme poverty and food insecurity. Since 2018, conflict has led to a food security crisis leaving 14 million people on the brink of starvation. Some estimates point to nearly 50,000 children dying from extreme hunger and hunger related disease caused by the conflict.

Water use or demand has increased by one per cent per year for the last four decades since 1980. This increasing demand is driven by population growth, increased economic activity and changing consumption patterns. The water demand has increased across all types of uses including domestic, industrial and agriculture. In addition, a significant impact of climate change on the global food system is through increased water scarcity.

World Resource Institute projections show that water stress will increase across some regions and countries more than others over the coming decades to 2040.

The United Nations World Water Development Report 2019 highlights that more than two billion people live in countries which already experience high water stress, and about four billion people experience severe water scarcity during at least one month of the year. The natural increase for water demand, population increases and the effects of climate change will accelerate the stress on water supplies in the coming decades.

Related Articles: Will Ecological Risks Threaten Increased Peace in Bangladesh? | The Pros and Cons of Emerging Technology in Our Food System

The Nexus Between Peace and Resource Scarcity Threats

The relationship between peacefulness and food insecurity, water scarcity and population growth is complex. Adverse changes in the natural environment can lead to increased social tensions and civil unrest if societies do not have the necessary levels of resilience to deal with these threats. Similarly, conflict and disorderly population growth have well-documented negative impacts on the environment. These two dynamics of increasing resource scarcity and conflict can create a vicious cycle where one increases the likelihood of the other, leading to societies failing.

Emerging ecological threats act as stressors, however countries react differently to shocks depending on their levels of resilience. Resilience, or the ability of nations to mitigate and adapt to new ecological threats, will be critical in the management of future ecological shocks to ensure the stability of political institutions and prevent future social unrest and violence.

The MENA region is currently the most water-scarce region and at highest risk of increased stress. MENA has the highest percentage of medium to extremely high-risk catchments, at 92 per cent of total catchments. South Asia and sub-Saharan Africa follow, with 83 and 54 per cent of their catchments ranked between medium and extremely high risk.

In the future, more extreme changes in rainfall patterns are likely for the African continent. Warming of the African continent has increased by 0.5 degrees Celsius or more in the last century, and the mean annual temperature is expected to increase by 2 degrees Celsius by the end of the 21st century. The United Nations Environmental Programme projects that almost all sub-Saharan African countries will be water scarce by 2025.

About the author: The article has been written by the Vision of Humanity Editorial staff  – brought to you by the Institute for Economics & Peace (IEP). The IEP investigates the impact of COVID-19 and future trends in economics, politics, social dynamics, conflict and development.

Editor’s Note: The opinions expressed here by Impakter.com columnists or contributors are their own, not those of Impakter.com. — In the Featured Photo: Shibuya Crossing, Tokyo. Featured Photo Credit: Ryoji Iwata, Unsplash.

The Institute for Economics and Peace is the world’s leading think tank dedicated to developing metrics to analyse peace and to quantify its economic value. It does this by developing global and national indices, calculating the economic cost of violence, analysing country level risk and understanding positive peace. The research is used extensively by governments, academic institutions, think tanks, non-governmental organisations and by intergovernmental institutions such as the OECD, The Commonwealth Secretariat, the World Bank and the United Nations. The Institute was recently ranked in the top 15 most impactful think tanks in the world on the Global Go To Think Tank Index. Founded by IT entrepreneur and philanthropist Steve Killelea in 2007, the Institute for Economics and Peace is impacting traditional thinking on matters of security, defence, terrorism and development.