The Benefits and Power of Assisted Natural Regeneration

When you think about restoring a deforested patch of land, you likely picture someone digging holes in the ground and planting seeds or saplings. Planting trees is important (if it’s done the right way), but in many cases, it’s better and cheaper to let trees grow on their own and forests restore themselves with little human assistance.

In fact, there is a wide spectrum of approaches to restoring forest landscapes. At the passive end, there is spontaneous regeneration, where trees and other native vegetation regrow naturally on the land. Think about what happens after a normal forest fire: after some time, little shoots pop up from the ash and grow into big, strong trees without any help from people.

On the other end of the spectrum is the most commonly known approach, where people collect seeds from the forest, produce saplings in nurseries, and plant and maintain trees in degraded forests and lands.

Between those two extremes lies a particularly promising and viable approach: assisted natural regeneration, or ANR.

What is Assisted Natural Regeneration?

Assisted natural regeneration is a blend of active planting and passive restoration, where local people intervene to help trees and native vegetation naturally recover by eliminating barriers and threats to their growth, leaning on their knowledge of the land and on ancestral traditions.

But what exactly can people do to help the land and limit the frequency and severity of disturbances that can harm young trees and prevent them from growing?

To prevent the spread of wildfires, people can build firebreaks and clear the forest floor of dry debris. To stop cattle from munching on saplings, they can build fences to keep them out. To give native trees enough room to grow, they can remove invasive grasses and shrubs. And, if natural regeneration on its own does not increase tree cover quickly enough or the targeted species fail to pop up on their own, people can selectively plant trees to fill the gaps.

So why is ANR an important technique in the ecosystem restoration toolkit? And what are its specific advantages? Research shows that ANR is a cost-effective, nature-based solution for restoring millions of hectares of land, while providing the ecosystem services — like clean water and healthy soil — that people need to thrive.

What Are the Advantages of Natural Forest Regrowth?

Assisted natural regeneration can play a critical role in achieving global targets on climate and biodiversity, including the Paris Climate Agreement, the Trillion Trees initiative, and ambitious targets set by the Bonn Challenge — which aims to restore 350 million hectares of degraded and deforested lands by 2030.

More than 60 countries have already committed to revitalize 210 million hectares (or 519 million acres, more land than all Saudi Arabia) through the latter. That may sound like an astronomically large area, but it’s still only a small portion of the more than 860 million hectares (2.1 billion acres) across the tropics — an area the size of Brazil — that could benefit from restoration.

Achieving those massive goals is simply impossible without embracing the power of regrowth. Why?

First, trees and forests can be restored using ANR at less than a third of the cost of tree planting, based on WRI estimates.

Second, ANR can restore much more land, much more quickly than active planting, as it requires very little human intervention. In Niger in Africa’s dry Sahel region, farmers have used ANR to regenerate more than 200 million trees since the 1980s.

Third, in areas where human pressure on the land is strong, especially from cattle grazing and agricultural expansion, ANR is the only way to ensure that the restored land effectively mimics the native habitat of local plants and wildlife. When ranchers manage their land more sustainably and graze their cattle more efficiently without degrading the land, they can fence off areas near biodiverse protected areas to help nature regrow without hurting their bottom line.

Fourth, it can create jobs and bring income to landholders, as someone has to protect the new recovery by building fences, patrolling for fires, keeping cattle out, collecting seeds and producing seedlings, and monitoring progress. It’s also cost-effective: Restoring 21.6 million hectares (53 million acres) with ANR in Brazil alone could reduce the cost of action by $90.6 billion, or 77%, when compared to tree planting.

Finally, for farmers, pastoralists, ranchers and local communities, ANR is an important weapon for fighting climate change. Recently published research found that letting forests regrow naturally can absorb 23% of the world’s CO2 emissions every year — an estimate that is 32% higher globally than the Intergovernmental Panel on Climate Change (IPCC)’s latest numbers. Naturally regenerating those 21.6 million hectares in Brazil, for example, could sequester more carbon than the annual emissions of Brazil and Canada, combined.

As investors are increasingly interested in funding nature-based solutions to the climate crisis, assisted natural regeneration is too good an opportunity to pass up. 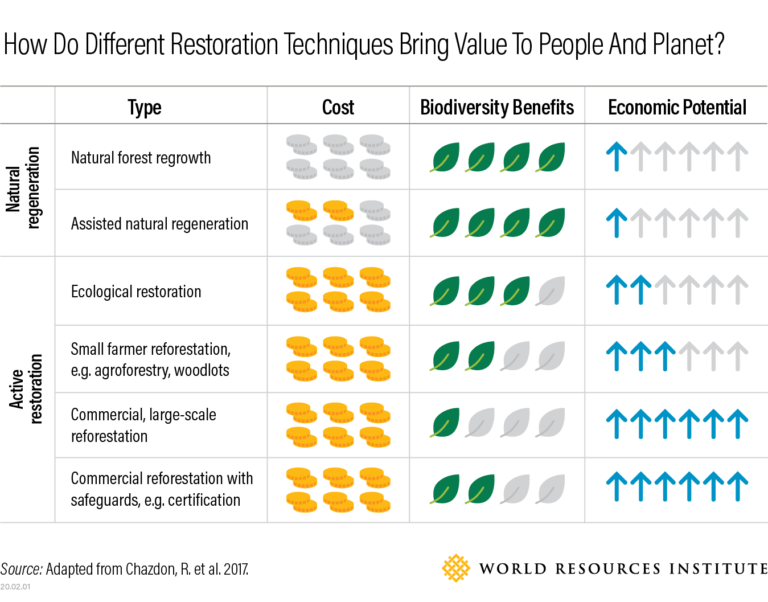 Assisted natural regeneration doesn’t work for every landscape; it’s critical to assess the local context. For example, ANR works best in areas that are not highly degraded but are surrounded by forest remnants and where seeds are living in the soil. Where intensive farming and overgrazing have not heavily degraded or compacted the soil, tree planting usually makes more sense.

In practice, this means ANR works where there those conditions are met and local landowners are incentivized to do it. That’s often where there are lower opportunity costs to returning grazing land or cropland to nature.

Farmers are unlikely, for example, to give up their richest and most productive land unless they are heavily compensated. That means that landowners embrace ANR on land poorly suited for agriculture, hilly and rocky terrain, former agricultural fields close to forest remnants, remote landscapes far away from roads and towns, marginal farmland where yields have declined for years, and areas that have not been plowed recently. 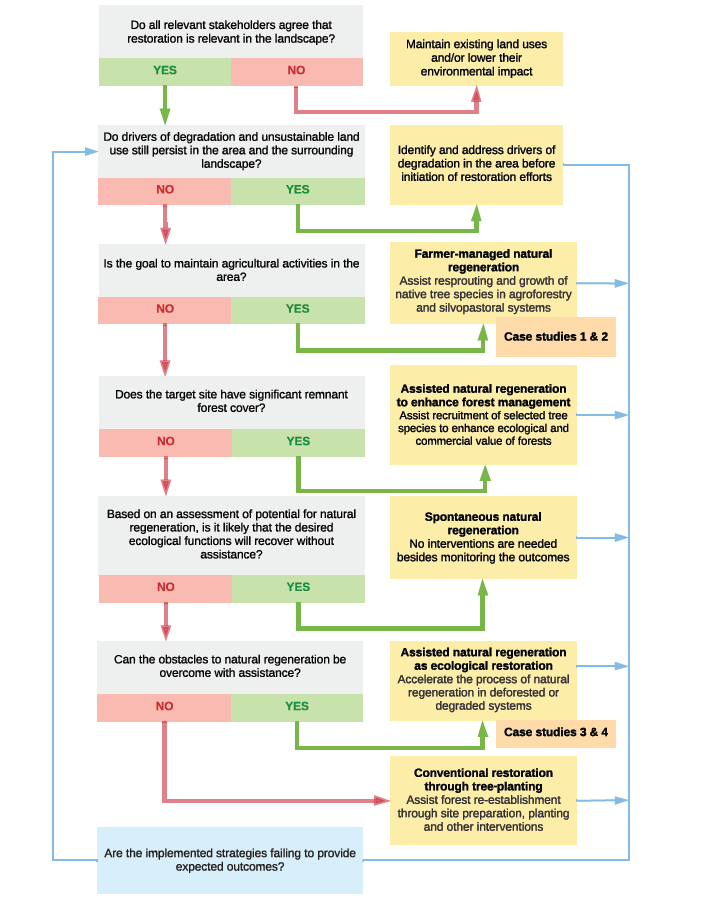 One county presents an especially large opportunity for ANR: Brazil is one of the five countries with the largest priority areas for restoration, and has made a large commitment to restore 22 million hectares (54 million acres) by 2030 as part of Initiative 20×20 and the Bonn Challenge.

Across the Amazon and Atlantic forests, there are millions of hectares of pasture lands under natural regeneration that used to be forests. That’s why landowners, state governments and researchers are working together to promote a more sustainable use and management of the land that can help trees grow back.

Brazil’s Atlantic Forest Restoration Pact (PACTO) serves a great example that other countries can follow when considering wide-scale assisted natural regeneration. Founded in 2009, PACTO has promoted ANR as key part of its strategy to restore 15 million hectares (37 million acres) of degraded land by 2050. 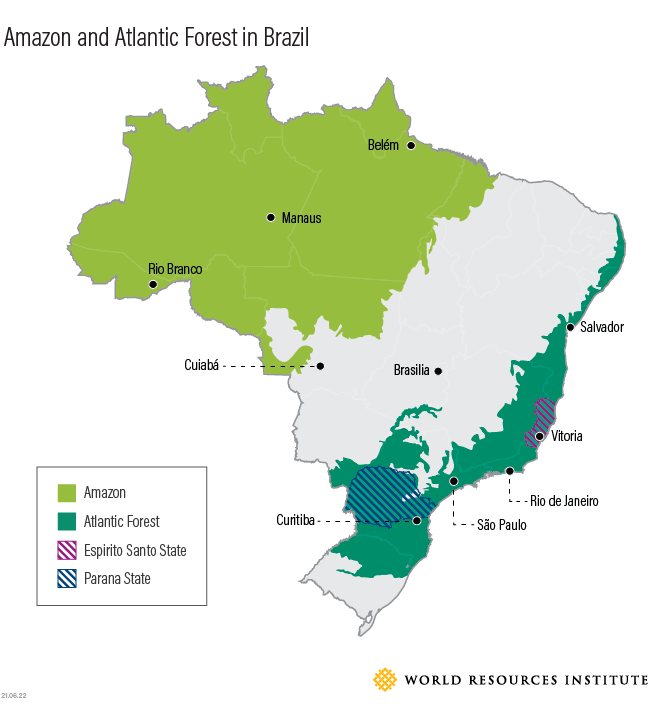 And it is working. Today, up to 740,000 hectares (1.8 million acres) of this biodiverse yet highly fragmented forest are under natural regeneration and active restoration. How is PACTO applying ANR?

The first step was to build a relevant coalition with research institutions, NGOs, governments and private companies. Commitments from farmers and local landowners — and their dedication to adapting the work to local conditions — are key to advancing the restoration agenda in several landscapes.

Related Articles: Brazil’s Forests Are Being Restored — Now We Can See Where | We Lost a Football Pitch of Primary Rainforest Every Six Seconds in 2019

A good example of PACTO’s success is the Projeto Cultivando Esperança (Growing Hope Project) in the southern state of Parana. In an area shared by several communities, including rural settlement families and smallholder farmers, the NGO Mater Natura began to assist the regeneration of 265 hectares (654 acres) of forests on and around riverbanks by building fences to protect the growing trees and planting specific species to enrich biodiversity.

The economic benefits of the program were key to its success. In the shade of the trees, people grew yerba mate, a native plant that makes tea and beverages popular in Brazil, the United States and Europe. By providing a home for this key non-timber forest product, the restored forest is creating a sustainable market opportunity for the surrounding communities, incentivizing them to continue embracing ANR.

How Can Assisted Natural Regeneration Programs be Scaled?

Despite success here and there, there is still a lot to be done to accelerate assisted natural regeneration in the Atlantic Forest. Recently, PACTO has worked to better understand why landowners leave areas to naturally regenerate and how to mobilize society for supporting ANR. At the core of the solution are strong public policies that reward landowners for restorative actions — like creating subsidies for fences and fire control equipment, or investing in enforcement to ensure that regenerating areas keep recovering.

In Espirito Santo state in Brazil’s southeast, for example, a government program called REFLORESTAR pays landowners for their land’s improved ecosystem services if they help it naturally regenerate. Crucially, it also pays them to maintain the regrowing areas, improving the chance of long-term success.

Investing in monitoring platforms like the Brazilian Restoration and Reforestation Observatory can help people see where ANR is working — and where it’s lagging behind. That, in turn, can help landowners and policymakers refine their practices and accelerate progress.

The lessons learned from monitoring natural regeneration in in the Atlantic Forest is already informing work in other Brazilian ecosystems. In the Amazon rainforest, the Alliance for Restoration in the Amazon has catalogued that more than 13,000 hectares (32,000 acres) are under ANR across almost 150 initiatives. And the Observatory has found that 9 million hectares (22 million acres) of the Amazon are naturally regenerating (though that land needs to be protected from further deforestation).

Helping Nature Regrow: A Win for Climate and Biodiversity

Assisted natural regeneration encompasses a wide range of activities that aim to accelerate, enrich or encourage the natural regeneration of forests. It’s a highly flexible approach that can help people achieve a wide range of objectives: from restoring the buffer zones around protected areas to creating biological corridors where birds and mammals can freely roam, and diverse secondary forests where a mixture of commercial and native tree species are grown and harvested sustainably.

These next ten years, during the UN Decade on Ecosystem Restoration, are ANR’s time in the sun. It’s up to policymakers, investors and local landholders to take the dream of forest regeneration and turn it into a reality.

To learn more about WRI’s work restoring degraded land, sign up for their newsletter. Stay tuned for more updates from WRI on the promise and potential of ANR in the coming years.

About the authors: Miguel Calmon is the Forests Director for WRI Brasil. Bruno Calixto is a Communications Specialist at WRI Brasil. Mariana Oliveira is a research analyst at WRI Brasil. Jared Messinger is a Manager with the Global Restoration Initiative, which aims to restore degraded landscapes back to economic, social and environmental productivity. Julio Alves is a research analyst at WRI Brasil. Will Anderson is the communications lead for the Forests Program’s Global Restoration Initiative, where he manages outreach for WRI’s work on AFR100, the Land Accelerator, Initiative 20×20, TerraMatch, and monitoring techniques.

Editor’s Note: The opinions expressed here by Impakter.com columnists are their own, not those of Impakter.com. — In the Featured Photo: Assisted natural regeneration in Brazil. Featured Photo Credit: Joana Oliveira, WRI Brasil.

July Was World’s Hottest Month Since 1879