The Role of Ecosystems in Achieving the SDGs 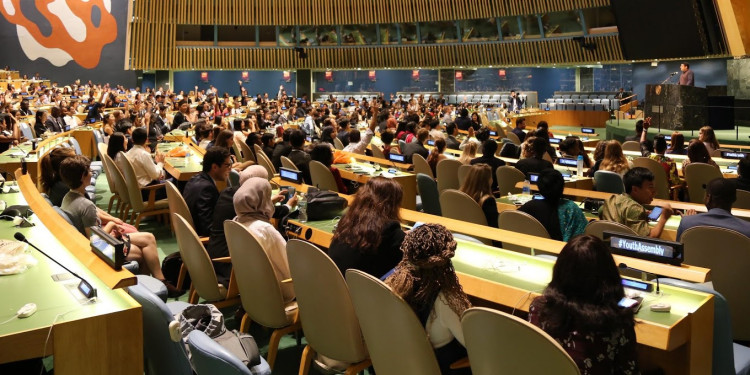 We are currently facing a critical point for the future of our planet. As our population continues to skyrocket, we are confronted with the daunting reality of impending food and water shortages, rising global temperatures, hunger, poverty, and a general gross exploitation of resources at a rate far quicker than that which would allow the resources to replenish themselves.

In response to these problematic trends, the United Nations has devised an agenda of 17 Sustainable Development Goals in the year 2015, which seeks to achieve the end of poverty and hunger, the implementation of sustainable use of resources, affordable and clean energy, world peace and much more by the year 2030.

Large philanthropic organisations like the Ford Foundation and the Rockefeller Foundation have been working with other organisations on these issues for decades, supporting portfolios of grantees and encouraging them to partner with each other. Governments have also played an important role as conveners of major issues; just consider the role that the NIH has played in driving innovation in the United States through its grants programs that cut across sectors; or the manner in which the government of Singapore developed a national and cross-sector effort around innovation. These, however, still aren’t enough. More often than not, the march toward progress turns out to resemble a slow and painstaking crawl more than it does a march.

Those who have been most successful at enacting lasting change are the free thinkers who recognized the urgency of the task at hand and with it the importance of large partnerships in creating enterprises that have the specialization, resources and manpower needed to act efficiently. There appears to be growing recognition that achieving these Sustainable Development Goals, or at least making significant and lasting progress towards achieving them, will require a herculean effort across both the public and private sectors.

As has been previously mentioned in this SDG series, no single nonprofit, corporation or network of individuals can accomplish sustainability on its own. When real partnerships are formed by people and organisations with aligned visions but different methods of executing them, networks are created that are far more powerful, resourceful, diverse and inclusive, and certainly better equipped to drive impact, than their individual components would have been.

There exist already many valuable public-private partnerships within this space that can bear testament to the exponential scale of impact facilitated by strong partnerships. These partnerships are in large part created by the conscious efforts of ecosystem creators who provide innovators with opportunities to meet and connect with one another at their events.

For example, the World Economic Forum has proved to be a determined ecosystem creator with its recent facilitation of a multi-stakeholder partnership, known as the IT Industry Skills Initiative, which promises to equip 1 million people with tech resources and training opportunities by January 2021.

In 2017, the Bloomberg Global Business Forum served as the stage for several major announcements in its inaugural year. These included one by World Bank President Jim Kim, one by UNFCCC Executive Secretary Patricia Espinosa Cantellano, who joined Michael Bloomberg to announce a new initiative to ramp up finance for climate action, as well as one by California Governor Edmund G. Brown Jr., who announced the 2018 Global Climate Action Summit that is yet to be held in San Francisco.

Over the course of its ten years of operation, the Clinton Global Initiative facilitated 3,400 “Commitments to Action” at its events, in which government officials, corporate CEOs, NGO executives and industry-wide leaders ‘committed to solving pressing global issues, often aligned with the SDGs. 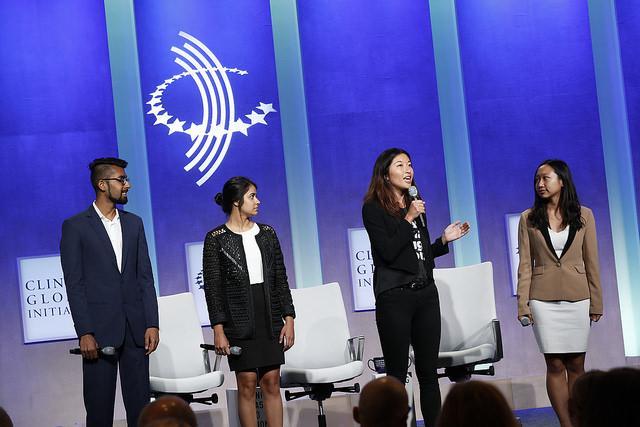 As the wide scope of these cross-sector partnerships indicates, there is no one approach to attaining sustainability. Social entrepreneurship is another promising angle for addressing sustainable development due to its ability to spearhead innovation, involve communities and impact a broad array of fields. One notable leader in the sphere of entrepreneurship is the Kauffman Foundation, a nonprofit with priorities around education and entrepreneurship in the United States. For its entrepreneurship efforts, it has oriented itself around supporting entrepreneurship ecosystem creators, even to the point of establishing an industry around such efforts. They have observed the approach of venture capital, Stanford University and Silicon Valley in building ecosystems within which entrepreneurs can thrive, and are now working on making that ecosystem creation process viable in a broad and decentralized way.

It is important to recognize that while Stanford, Silicon Valley and the VC industry are all individual ecosystems, they themselves are composed of micro-ecosystems, which then come together to form a macro-ecosystem of innovation. That macro-ecosystem is what we need to model our efforts after.

Their recent ESHIP Summit, which I attended, put a fine point on this, with the lessons from it being easily adaptable to the type of partnership building we will need to use to transform outcomes for the SDGs.  Here, at The Resolution Project, we are an SDG-17 organisation that has been building an ecosystem of support for college-age social entrepreneurs around the world. We call these young entrepreneurs “Resolution Fellows”

The 100+ partnerships we have built with other organisations who can support Resolution Fellows have had a transformative impact on the ways in which our Fellows have been able to attack SDGs 1-16.

More importantly, though, the partnerships themselves have led to ongoing collaboration and a greater alignment between all of our organisations. A single partnership can accomplish a single goal, but an ongoing relationship between numerous partners can lead to a systemic evolution in an ecosystem. Taking it one step further, when these ecosystems connect – much like Stanford, Silicon Valley and venture capital overlap and embrace one another — the scale of impact can crest in an incredible way.

To provide an example of just one Resolution Fellow out of the current 380+, Hanna Amanuel is leading Rahwa, a venture that trains and employs women in rural Eritrea as Maternal Health Agents (MHAs), who support other women throughout their pregnancy, childbirth, and postnatal periods. To date, 415 women have accessed free, quality childbirth care and free ambulance transportation through the work done by Rahwa. 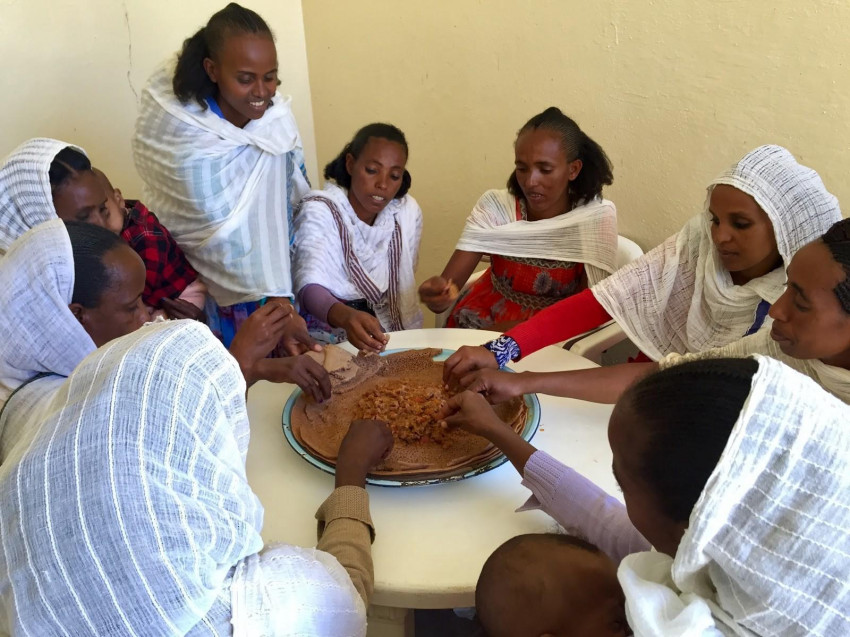 In the Photo: Maternal Health Agents in Eritrea enjoying a meal together. Photo Credit: Rahwa

The following is an example of how Rahwa’s MHAs work with women in their communities: in February of 2016, Zebib, a MHA working in Tekelabi village, visited Nebyat, a 24-year-old expectant mother with severe edema. After speaking with Nebyat and identifying edema as a sign of a gestational complication, Zebib learned that Nebyat had not sought medical attention. Zebib accompanied Nebyat to the hospital, where she was diagnosed with pre-eclampsia and where she had received appropriate care. Nebyat later safely gave birth to her baby girl.

Had Zebib not intervened, Nebyat and her child would have faced irreversible and potentially life-threatening medical issues. In doing such work, the Rahwa venture addresses education, economic growth, gender equality, ending poverty, health and well-being, reduced inequality and peace-building — a whopping 7 individual SDGs.

GIRL SAFETY: WHY EDUCATION IS NOT PREPARING GIRLS FOR THE REAL WORLD

The Resolution Project provides an ecosystem of support for Fellows like Hanna, while also helping them cultivate their own ecosystems and tap into existing ones. Fellows such as Hanna are paired with mentors (Resolution Guides), they are recommended for positions or grants to partner organisations and foundations, connected with subject experts and other Fellows, and are generally introduced to purposeful relationships and opportunities. We have paired Hanna, for instance, with a Guide (Matthew Thomson, Marketing Automation Manager at StructuredWeb), with subject experts in building financial models in resource-poor settings and with Rose Wang, another Fellow who has advised her on seeking grant funding. We have advanced her successful applications for various funding opportunities through direct support, and have engaged the team at the Harambe Entrepreneur Alliance, which has also supported her work, to find additional synergies. In working with young people, with corporations, universities, foundations and curated communities around a range of issues (including conservation, community development, energy efficiency, economic development, humanitarian aid and many more), we are taping into many existing ecosystems and providing an example to our Fellows of how they can scale their impact through specialisation, alignment and cooperation. 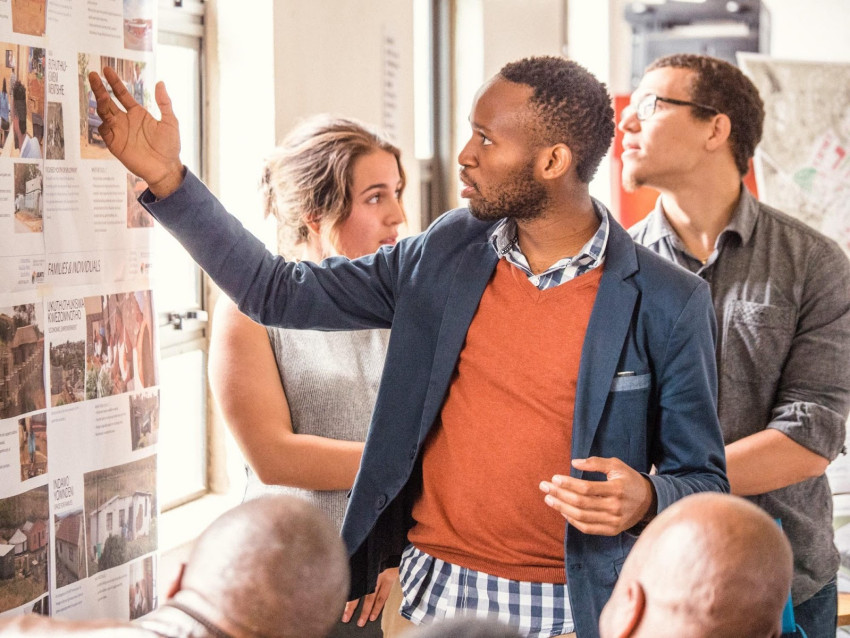 Despite the incredible diversity of the specific missions of our Fellows’ ventures, each one, in its own, unique way, aims at the same goals: the goals of the sustainability movement and of creating a better global future. We believe that young leaders, as members of the generation that stands to inherit this Earth, are the key to developing innovative solutions to the modern crises. We have already seen astounding progress towards sustainable development goals created by hundreds of college-age social entrepreneurs who just needed to be given access to support and resources (to an ecosystem, that is) in order to flourish. At the center of it has been the local ecosystem building-an inherently scalable process and something we see our Fellows modeling in their communities. As they connect their own ecosystems and stay patched in to the Resolution’s, we see their impact scale accordingly. Only 400 college students have impacted over 1.5 million people with their work. Without ecosystems to grow and thrive within, that number may easily have been. 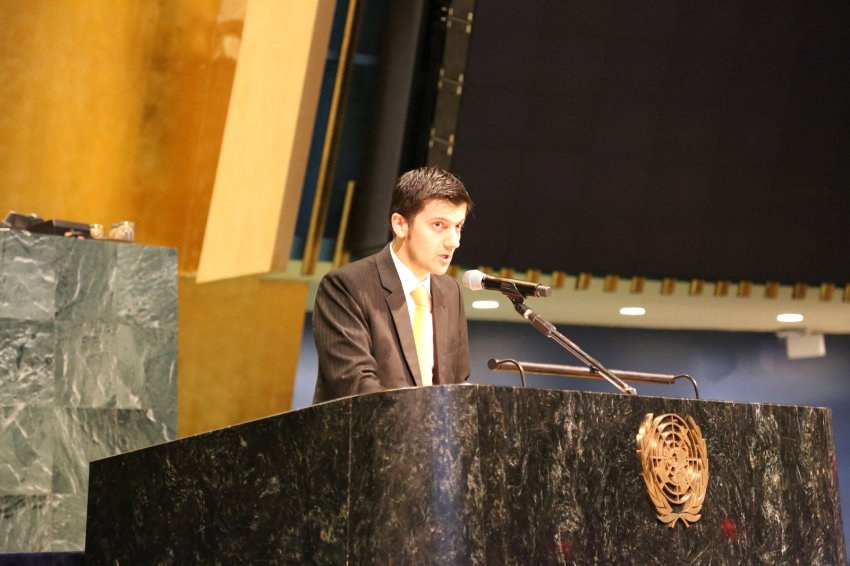 In the Photo: Resolution CEO, George Tsiatis, speaking at the U.N. Photo Credit: The Resolution Project

Yet the best part of ecosystem development is that you don’t necessarily have to believe that young social entrepreneurs are the key to developing a sustainable future. No matter what your specific vision is for creating a better future, you can pursue it, because we need diverse approaches and methodologies to address the widespread problems in all areas represented in the SDGs. As an individual, as a member of a community, of a nonprofit or a government, specialise in your mission and be the absolute best at pursuing it. But don’t stop there-go on to seek out partners whose goals align with your own and with whom you will be able to work together for better outcomes.

In this way, we can develop countless ecosystems-both independent and interconnected that are diverse and equitable, that are driven by passionate leaders that make the most efficient use of resources and tools that allow for strength in numbers and peaceful collaboration; ecosystems that carry us towards our Sustainable Development Goals not by crawling-nor by marching-but by sprinting instead.

Plastic Whale: Fishing for Plastic and Saving the Planet

George M. Tsiatis is CEO & Co-Founder of The Resolution Project. Resolution identifies and empowers undergraduate students around the world who wish to launch new social ventures, supported by Resolution's global network of resources. With Resolution Fellows on all six inhabited continents and across America, Resolution is building a generation of leaders with a lifelong commitment to social responsibility. Prior to taking the helm at Resolution, George co-founded and grew Group 113, an award-winning B Corp providing impact-focused organizations with branding and marketing services, and was the company's Managing Director for over 10 years. He has played various roles in launching several additional entrepreneurial ventures over the years. Before Group 113, George began his career at a major New York City public relations firm. George also serves on the boards of the Hellenic University Club of New York and the Kew-Forest School. George earned his BA with honors from Harvard with a Special Concentration in Byzantine Studies and his JD with high honors from St. John's University.