Businesses Hurt by the Change in Commuter Traffic 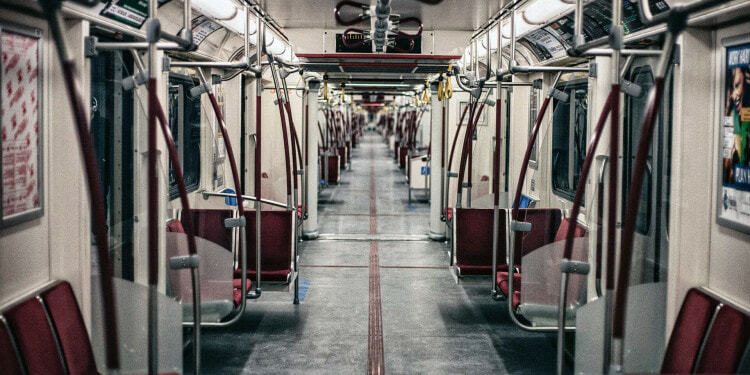 Major transit systems in cities across the U.S. and around the world have been hit hard by the Covid pandemic. Tightly packed trains where commuters stood shoulder to shoulder during rush hour often became virtually empty. The question is, will this commuter traffic ever come back?

People have been working from home for the better part of last year. This has allowed commuters to wake up at a convenient time, turn on their computer, and work from home. Commuters who once raced to wake up, get dressed, grab their things for work, ran to catch a train, stood shoulder to shoulder to get to work, and just ended up being on their computers anyway, may have seen an improvement in their quality of life. Some might have gotten more sleep, spent more time with friends and family, reached the gym earlier, and worked more efficiently from the comfort of their homes.

There was an economic windfall too, benefitting many commuters’ wallets. Monthly fares for NYC transit systems can be as much as $400 a month. This money can now be used for other purposes.

Related Articles: The future of public transportation needs courage – Why and how, lessons from Italy | How Sustainable Transportation Drives Sustainable Cities | COVID-19 Response in Rural Businesses: How Impact Investors Switched to Remote Work

The reduction in commuter traffic over the past year has drastically hurt transit systems’ revenue all over the world.

In India, some of the busiest commuter rail services were completely shut down in cities like Mumbai. This was to reduce the spread of covid during the height of the pandemic. Today, they have opened back up requiring proof of vaccination to get onboard.

In America, the situation is equally dire. New Jersey, in its latest fiscal year, which ended June 30, N.J. Transit took in just $72 million from sales of monthly passes, a drop of $300 million from two years ago. For interstate rail transportation in the U.S., by way of Amtrak, which saw a 97 percent plummet in riders during the pandemic has seen its numbers come back up because of vacation riders not daily commuters, but are still down about 35 percent below pre-pandemic numbers.

The railroads have offset their steep losses of revenue with billions of dollars in emergency federal aid. The Metropolitan Transportation Authority received more than $14 billion, and N.J. Transit is expecting a total of $5.3 billion. The railroads have been forced to change how they operate, drastically cutting service, reducing fares, and offering new kinds of tickets.

However, they have not yet figured out how to replace the steady monthly revenue the pandemic wiped out which may never return if workers do not resume to five-day-a-week commuting. The management of all three railroads had also banked on a resurgence of commuting after Labor Day. But, as the Delta variant spread, many big employers have been postponing return-to-office plans to late fall or even next year.

Those that have returned to the office have also been enjoying two- or three-day workweeks now that people have become comfortable working remotely. Some CEOs are even saying that their employees have been more productive working from home. Also, some CEOs and corporations have said they do not want employees coming into the office just to log onto zoom.

The lower commute rate not only hurts the transit systems, but the businesses conveniently located on their way. These are the coffee and bagel breakfast spots where commuters can get something while en-route to and from their transit service. It also hurts the after-hours spots for drinks and something to eat with co-workers and friends after work. Unable to pay their rents, many have had to close up with virtually zero foot traffic walking by.

Bloostein, the founder of a coffee shop that’s been located in Grand Central, New York City’s landmark transit hub since 1999, was hurt by the dearth of business since Covid-19 ravaged New York City’s economy.  “It feels horrible we wanted to be there, we still want to be there,” said Bloostein, who relinquished ownership in 2018 but was still involved in daily operations. “It’s just a horrible situation.” After more than two decades of serving coffee and scones to commuters rushing to the office, the store closed shop for good in July because it was unable to pay its rent.

Going forward, signs of things returning back to normal seem uncertain especially for public transit systems. This is because of rising concerns of the delta 9 variant. Employment in the biggest cities fell further than in smaller cities. This is due to the people remaining in smaller towns and cities not having to work in major cities. As a result, the restaurant businesses have declined in major cities seeing reduced customers and having to lay off staff or shut up completely. This is the opposite in smaller towns and cities where restaurants have benefitted from people working remotely and having more opportunity to go out at their local restaurants.

The Covid pandemic has hurt the transportation industry and businesses that depend on the traffic it brings. However, it may have also improved other commuters’ lives through efficiency and convenience. Unfortunately, where some people benefit, others are hurt. It’s still too early to draw conclusions except that the pandemic is proving to be a game-changer.

Biden To Reduce Costs of Wind and Solar Projects

When Wine Was Healthier for You Than Water

When Wine Was Healthier for You Than Water