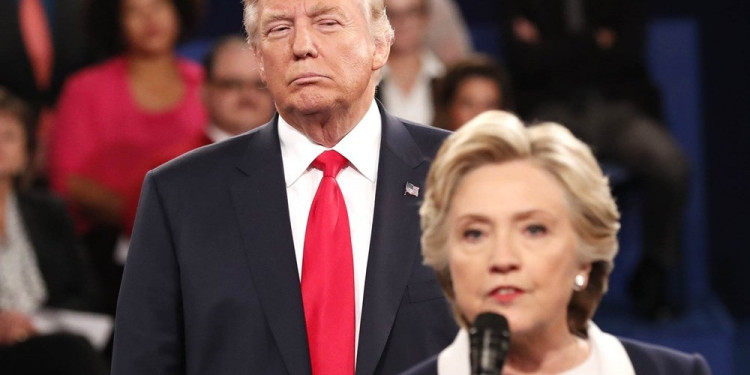 Among Western political leaders, Trump stands out. Normally, when the campaign is over, politicians forget the opponents they beat or at best, include them as allies in coalition governments. You never hear Macron mention Marine Le Pen and both Angela Merkel and Luigi Di Maio have formed governments with their opponents. Not so Trump. He is obsessed with Hillary Clinton and still treats her with insults, in campaign mode: “Crooked Hillary”! She is behind everything that’s wrong with this country!

The right words to describe Trump? Obsessed and delusional. His “Crooked Hillary” obsession is demonstrably  foundational. He tweets more about “Crooked Hillary” and everything he can attribute to her than about anything else. Even the policies he has launched and that could change the world come second, like climate change, North Korea, China or the trade war he has recklessly unleashed on America’s closest allies (Europe, Canada, Mexico).

Deep down, a doubt is eating him up: his electoral win was neither fair or indisputable. Hillary Clinton got over 2 million votes more than he did and that haunts him. We all know it was due to a quirk in the American electoral system: The votes she won in the cities weighted less than those he got in the GOP-controlled rural areas.

Trump can’t stand the idea that his win was not clear-cut, it drives him crazy. He denies the evidence, he takes refuge in delusions. His inaugural crowd was the largest, larger than Obama’s. Russia never helped him, neither did the Cambridge Analytica team (he is careful to never tweet about that particular scandal).

It was “Crooked Hillary” all along, a Dem conspiracy, they spied on him, they spied even before he got into the White House! The Justice Department and the FBI are infiltrated by Hillary Clinton people conspiring against him. The fake news press – CNN, the New York Times, the Washington Post etc – is systematically misrepresenting his presidency.

Predictably, this is the kind of Fox news he loves to retweet (and he broke with protocol to tout the jobs data before it was released):

223,000 jobs added in May, even the NYT runs out of words to describe how good the numbers are! pic.twitter.com/K1GB8G0zsf

He’ll never retweet the New York Times…And he probably did not read that NYT article. If he had, he wouldn’t be so happy. It makes clear that his administration had nothing to do with those “good numbers” that began with Obama when America recovered from the Great Recession.

While it is definitely the longest recovery yet it is a disturbingly weak one, with wages stuck at modest levels. A tighter labor market should have prompted a raise in wages, but it hasn’t. The reasons are complex and include the decline of unions and digital disruption. In short, the good jobs promised by Trump have not yet materialized.

But Trump is so delusional that he will never try and understand what’s wrong with the labor market and fix it. He prefers to yell “fake news”. He gleefully retweeted good news about his favorite media outlet, Fox News:

Trump forgets that from an overall political point of view, you should weigh not Fox News against CNN alone but against ALL other liberal cable news supporting “progressive” ideas.  Consider the “big threes”: Fox News against the two major liberal networks, CNN and MSNBC. The numbers speak for themselves: Against Fox News’ average of 1.4 million daily viewers, MSNBC has 914,000 and CNN has 655,000. That adds up to almost 1.6 million viewers, not a lot more than Fox News, but significant.

This result is confirmed in the all-important prime time hours: Fox News gets a whopping 2.4 million viewers, but CNN and MSNBC taken together come in higher, at 2.535 million. This shows America is fairly evenly divided along partisan lines; however, it gives only a limited “feel” for the political situation.

What is left out:  other important sources of online news, like, for example, Bloomberg television that reaches over 310 million households worldwide and is a major source of news for the business and financial community, both on Wall Street and abroad. Not to mention the growth of social media and mobile devices that has changed the game and affected the relative weight of cable news.

Are Trump’s delusions working with his fans? Probably, but on twitter, there are some savvy commentators that Trump can’t fool, like this one:

Yes, the “Crooked Hillary” obsession is behind Trump’s constant barrage of tweets.  Delusional.

As I write this Sunday, he just fired a series of tweets about, what else, the Russian investigation. He starts by quoting Jesse Watters (in case you’re wondering, Watters is not a political expert, he is simply a Fox news journalist known for his “man-on-the-street” interviews):

Jesse Watters “The only thing Trump obstructed was Hillary getting to the White House.”  So true!

In the next two tweets, he complains once more about the Department of “Justice” (sic, in quotes) investigating his campaign manager Paul Manafort on charges that were “10 years old” and “previously dropped”:

As only one of two people left who could become President, why wouldn’t the FBI or Department of “Justice” have told me that they were secretly investigating Paul Manafort (on charges that were 10 years old and had been previously dropped) during my campaign? Should have told me!

….Paul Manafort came into the campaign very late and was with us for a short period of time (he represented Ronald Reagan, Bob Dole & many others over the years), but we should have been told that Comey and the boys were doing a number on him, and he wouldn’t have been hired!

Then he quotes Mark Penn, author, former pollster and political strategist, presumably because he says what Trump wants to hear about the Mueller investigation (and “Crooked Hillary” is behind it!):

Mark Penn “Why are there people from the Clinton Foundation on the Mueller Staff? Why is there an Independent Counsel? To go after people and their families for unrelated offenses…Constitution was set up to prevent this…Stormtrooper tactics almost.” A disgrace!

One wonders why Trump took on Manafort in the first place and then fired him so quickly, after less than three months on the job (in August 2016). Obviously Trump must have discovered something fishy, how could he not? Manafort had been under investigation since 2014 in connection with his well-known dealings with the Ukrainian government. As reported on Bloomberg last year, Manafort “made millions of dollars over a decade promoting Kremlin-friendly interests in Ukraine and beyond.”

Now, as a result of Mueller’s investigation, Manafort faces several charges in connection with his Ukrainian dealings (tax fraud, bank fraud and money laundering).  He has pleaded not guilty but Richard Gates, his business associate and former Trump campaign staff member, has made a plea deal with Mueller and agreed to cooperate.

Is Trump above the Law?

Early Monday morning, Trump went one step further, he tweeted that essentially he was above the Law since he could “PARDON” himself:

As has been stated by numerous legal scholars, I have the absolute right to PARDON myself, but why would I do that when I have done nothing wrong? In the meantime, the never ending Witch Hunt, led by 13 very Angry and Conflicted Democrats (& others) continues into the mid-terms!

A tweet that once more mentions the “13 very Angry and Conflicted Democrats” and the “never ending Witch Hunt”. A little later, he went back to the subject, saying that Special Counsel Mueller’s appointment was “UNCONSTITUTIONAL”, implying the Department of Justice is playing games, it’s not a serious institution, it’s implicitly in breach of the Constitution:

The appointment of the Special Counsel is totally UNCONSTITUTIONAL! Despite that, we play the game because I, unlike the Democrats, have done nothing wrong!

Soon after, the White House press secretary denied he was above the law.

Trump must know how dangerous all this is for himself. Anyone other than Trump would stay mum, especially on Twitter. But he appears to believe that he can attack essential American institutions like the Justice Department and rock them so badly that they will collapse and the charges will fall away.

Delusional. But then again, maybe he is not. Maybe this signals the end of American democracy. Or does it?

Giving a purpose to young women