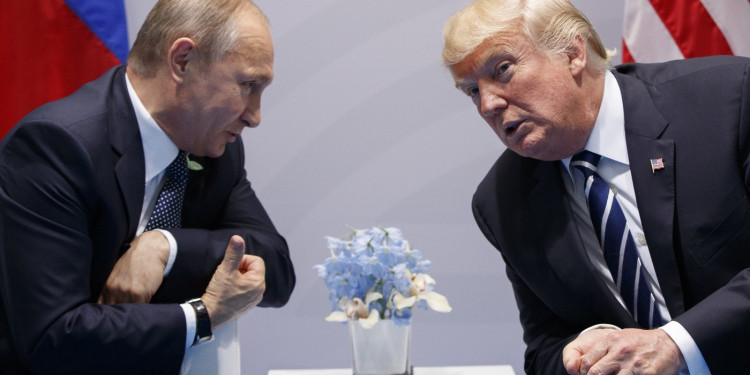 Listen to the Donald: This business about the “Witch Hunt” and Russian “Collusion” needs to stop, it’s all “fake news”, and the White House is “running very smoothly”, thank you very much:

The White House is running very smoothly despite phony Witch Hunts etc. There is great Energy and unending Stamina, both necessary to get things done. We are accomplishing the unthinkable and setting positive records while doing so! Fake News is going “bonkers!”

Trump’s twitter stream is studded with complaints about fake news over the Russian “Collusion”. On 30 April, the last straw was the New York Times disclosure of the 49 questions Special Counsel Mueller meant to ask him.

In many ways, this is a bizarre leak, and, to date, the source of the leak is still unknown, though chances are that it came from the White House itself (they don’t read like a prosecutor’s questions but more like “notes” taken by a Trump aide in the course of a conversation with Mueller’s team).

What is known is that this is the list of questions that were actually sent in March to Trump’s chief lawyer John Dowd. Shortly thereafter, Dowd resigned, reportedly because he realized Trump would not follow his advice on this question.

In one tweet, Trump said the leak of the Mueller questions to the media was “disgraceful” and in another he quoted John Dowd:

“This isn’t some game. You are screwing with the work of the president of the United States.”  John Dowd, March 2018.  With North Korea, China, the Middle East and so much more, there is not much time to be thinking about this, especially since there was no Russian “Collusion.”

Nothing about collusion in Mueller’s questions?

That is not how the American press saw it, and the following video is typical of the reaction of American journalists:

On May 2nd, Trump’s twitter stream suddenly veered in a new direction. He did something he rarely (if ever) does, he started endorsing books:

This is a book Trump no doubt sees as the perfect rejoinder to former FBI Director James Comey  A Higher Loyalty, a book and a man he hates.

Later in the day, Trump endorsed yet another “wonderful book”, this one by Ainsley Earnhardt, a “truly great person”, whose book, “The Light Within Me” is doing “really well” (it’s not, on Amazon it ranks over 5000 in the Kindle Store). But he is pushing her hard: “She is very special and so is her new book…bring it to number one!”

A POTUS urging people to buy a book?

This has to be a first. And what choice of authors! Gregg Jarret is a TV news anchor and a former trial attorney who joined Fox News in 2002; Ainsley Earnhardt is a co-host on Fox & Friends and has her own segment in the Sean Hannity Show. Both books are clearly partisan, both no doubt need promotion. While Gregg Jarrett’s book is doing well (his topic is obviously spot on with conservatives), Earnhardt’s is somewhat lackluster. Perhaps this is not surprising. After all, she’s not a journalist with a “hot book” like Michael Wolff’s Fire and Fury.

The Russian Collusion hangs over the Trump presidency like a cloud, and it’s hard to blow it away, hence the unpresidential, campaign-style “fake news” tweets. Anything to distract attention is good, partisan books and even the Stormy Daniels scandal. After all, most of his supporters, and in particular men like Trump, don’t really believe such an affair is scandalous…

Early morning on 3 May, Trump saw fit to support Giuliani and explain in three long tweets how he saw the affair,  denying that campaign funds were ever used for hush monies, saying that this sort of thing is:

…very common among celebrities and people of wealth. In this case it is in full force and effect and will be used in Arbitration for damages against Ms. Clifford (Daniels). The agreement was used to stop the false and extortionist accusations made by her about an affair,……

Because, of course, he is a “person of wealth” and there never was an affair! Fake news, that’s what it is.

EDITOR’S NOTE: THE OPINIONS EXPRESSED HERE BY IMPAKTER.COM COLUMNISTS ARE THEIR OWN, NOT THOSE OF IMPAKTER.COM. FEATURED IMAGE CREDIT: Trump meets with Putin at the G-20 Summit in Hamburg, Germany, July 2017. This Photo by Evan Vucci AP is licensed under CC BY-NC-SA

Lost in Translation No More: An Interview with Tarjimly

Lost in Translation No More: An Interview with Tarjimly