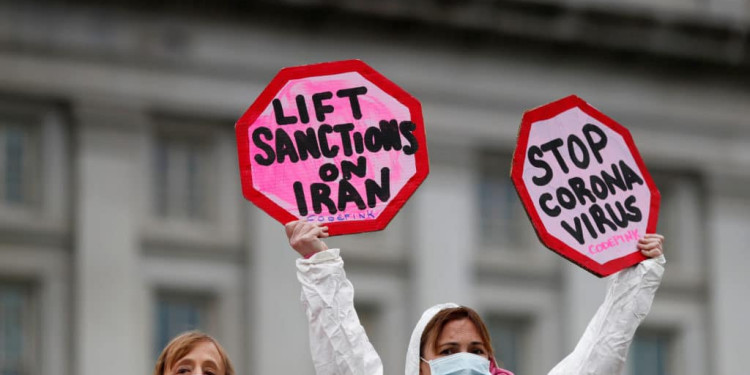 In one of my previous articles, “How U.S. Sanctions Are Hindering Sustainable Development,” I argued that U.S. sanctions are detrimental to Sustainable Development Goals (SDG), and are more often than not counter-productive in achieving their objectives. There have been numerous studies (1997, 2010, 2012, 2019) which attest to the human cost and lack of effectiveness of sanctions.

Whilst sanctions have been a feature in the U.S. geopolitical toolkit for some time, President Trump’s unilateral, excessive and often broad sweeping sanctions have received much critical attention — from both a humanitarian and a tactical standpoint. During Trump’s term, lessons learned by previous administrations regarding the overuse of sanctions have been ignored and attempts at diplomacy have been abandoned. During his term, Trump has most notably enforced further sanctions on Venezuela, Cuba, Iran and Syria.

In Venezuela, he issued new financial sanctions in 2017. In January 2019 more sanctions were announced against Venezuela’s state-owned oil company. In a 2019 interview, Mark Weisbrot, co-director of the Center for Economic and Policy Research in Washington D.C, declared the 2017 sanctions as devasting, and the 2019 sanctions even worse than those imposed on the people of Iraq — sanctions which have been condemned by some, not least former U.N. humanitarian coordinator for Iraq Dennis Halliday, as sanctioned genocide.

In the case of Syria, new sanctions under the Caesar act were enacted in June 2020. They are applicable to any Syrian or non-Syrian who aids or does business with the Assad government, or with any entity related to it. Unsurprisingly, these sanctions have been called out as illegal, coercive and cruel as they further contribute to poverty and make it near impossible for Syria to rebuild, impeding the transfer of humanitarian aid. It is also argued that the maximum pressure campaign in the region has had a detrimental effect on Lebanon, which is in a state of economic and political crisis.

The imposition and re-imposition of U.S. sanctions against Iran have been highly reported about. Firstly due to the fact that they have been numerous, and secondly due to Trump’s refusal to lift them during the first wave of the COVID-19 pandemic. This has had a severe impact on Iran’s ability to respond effectively — with even humanitarian imports unable to get through to Iran.

The U.S. withdrawal from the JCPOA deal has been damaging too — undermining the value of multilateral diplomacy by sending a clear message that the U.S., if so chooses, will exit agreements of great magnitude, something Trump has demonstrated on more than one occasion. This has since been followed up by an arrogant and almost farcical attempt to initiate a “snap-back” of U.N. sanctions despite having exited the deal.

So, it is little wonder why Trump has been given the title “sanction addict” The last two years, true to character, Trump has shown no willingness to reflect on his approach and this October the consequences of this were laid out plain and clear by his national security advisor, Robert O’Brien who said, “One of the problems we have with Iran and Russia is that we have so many sanctions on those countries right now that there’s very little left for us to do.”

Time for the US to finally admit it is a #SanctionAddict.

Kick the habit. More economic warfare against Iran will bring the U.S. less—and not more—influence. pic.twitter.com/jgAkE16Yoe

In UN Special Rapporteur Alena Douhan’s recent article, “Why sanctions should be a key issue in this US election,” she is explicit in her concern about developments in sanctions use:

Sanctions are moving in ominous new directions: Their scope, the justifications for them, and the types and number of targets are proliferating. In the process, a broad range of human rights are being violated, even the right to life, as people lose access to essential services, including medical care.

Human rights violations were also exacerbated by this year’s ongoing COVID-19 pandemic, with Douhan’s July 2020 study claiming that, despite exemptions for humanitarian trade, countries under U.S. unilateral sanctions were unable to get the vital assistance they needed.

Recent articles: Why With Trump There is No Common Future | Trump’s War on WHO | What if Trump Wins 2020 Election?

Trump’s sanctions have been the subject of observation and criticism by government officials, such as Peter E.Harrell, deputy assistant secretary for counter threat finance and sanctions in the U.S. from 2012 to 2014. He asserts that Trump uses sanctions with an “unprecedented aggressiveness,” and highlights the increasingly blurred lines between ordinary sanctions and the secondary sanctions which serve the purpose of pressuring third parties into stopping activities with a sanctioned country — or have their access to the sanctioning country cut-off.

Additionally, Trump’s heavy-handed approach with sanctions has not helped U.S. relations with its European allies. The European Union has been frustrated by the bullying manner in which Trump has wielded sanctions as he has tried to assert influence over Europe’s behaviour. Recent sanctions this October on Iran’s financial sector prompted further disapproval and concern regarding the humanitarian implications of “further exacerbating the shortage of foreign currency to pay for humanitarian imports.”

Whatsmore, Trump, whilst professing solidarity for the people living in countries such as Iran and Venezuela, has blatantly aimed sanctions against the people with “regime change” as the goal. His unilateral and unconscionable use of sanctions is considered by some critics as illegal, and ineffective.

Former senior advisor at the Treasury Department Elizabeth Rosenberg believes that sanctions will not cause regime change. Her conclusion is supported by the Peterson Institute for International Economics’s (PIIE) study which argues that sanctions rarely bring about a major change in policy or regime change. These findings have been supported by numerous studies, such as Professor Robert Pape’s 1997 study, “Why Economic Sanctions Do Not Work,” which found that only  5 out of 115 cases were successful in achieving their objectives.

Challenges to the legality of unilateral sanctions under universal law have also been put forward, such as Secretary-General, Asian-African Legal Consultative Organization (AALCO) Dr. Rahmat Mohamad’s argument that unilateral sanctions violate basic principles of the UN charter. Medea Benjamin, co-founder of Global Exchange and CODEPINK, along with Nicolas J.S. Davies, author of “Blood On Our Hands: the American Invasion and Destruction of Iraq,” also maintains that using sanctions to affect regime change is illegal as well as ineffective. They argue that sanctions violate Article 19 and 20 of the Charter of the Organisation of American States. An argument which has also been supported by Mark Weisbrot.

To what extent Biden would be able to reverse the damages of Trump’s misuse of sanctions is unknown. Biden himself is no stranger to imposing sanctions. Furthermore, in the case of Iran, he will face challenges dealing with the sanctions —Dave Lawler, World Editor at Axios, explains — due to the “architecture” being far more complex than previous sanctions imposed by former administrations.

Biden has at least been a critic of Trump’s maximum pressure campaign on Iran, recognizing it as the failure it has been and criticising Trump in regards to Venezuela and Cuba. Whether this criticism comes from a humanitarian or tactical stance, the fact remains that Biden has pledged to enter into diplomatic discussions with Iran and Venezuela, recognised the need for a new Cuba policy and promised to grant Temporary Protected Status (TPS) to Venezuelans.

“I would immediately grant temporary protected status to Venezuelans as President." 🇻🇪

Whilst the fight to end economic sanctions will still need to be continued, one point is poignantly clear —  if Trump was able to inflict so carelessly this amount of damage on the lives of millions upon millions of people without even entering into a war, blunting foreign policy tools to serve absolutely no use and alienate and frustrate his allies to the extent that he has, what would another four years of Trump look like? Let’s sincerely hope we don’t need to find out.

As of August 2020, sanctioned countries (either unilaterally or in part) include:

In the Featured Photo: CodePink demonstration — why sanctions against Iran and Venezuela during a pandemic are cruel. Featured Photo Credit: Monthly Review Online.

The Man And The Sea: The Recent Case Of Marine Pollution In Kamchatka

Charlie is an Editor at Impakter. She is an Arabic and Persian graduate from the University of SOAS and previously studied Social Anthropology at Goldsmiths College, London.

The Man And The Sea: The Recent Case Of Marine Pollution In Kamchatka