The American version vs. the European: A Look at the Differences 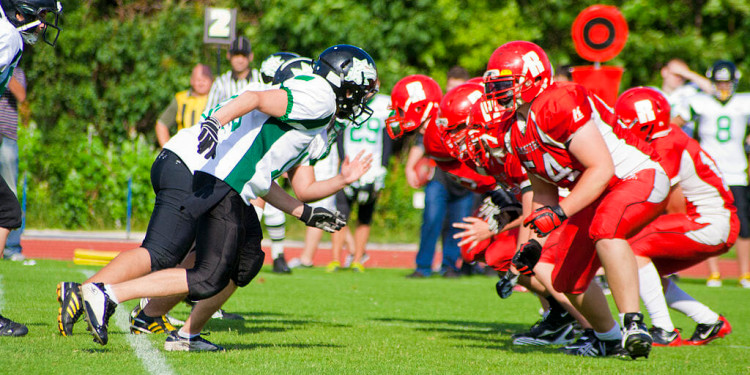 Europe and the United States mostly share basic human rights and economic principles, NATO, leadership in the UN Security Council, music, and many movie stars. But they are also different, and no better way to peek in at the differences is to look at the way a professional sport mesmerizes huge numbers, mostly on weekends, and on both sides of the Atlantic.  And that sport is called  “football” in America and Europe, but it’s not the same game. In fact, Americans call “soccer” the European version of the game.

Here’s a closer look at the differences.

The Precursors of football

The first known examples of a team game involving a ball, which was made out of a rock, occurred in old Mesoamerican cultures for over 3,000 years ago. It was called Tchatali by the Aztecs, although various versions of the game were spread over large regions.

On some ritual occasions, the ball would symbolize the sun and members of the losing team would be sacrificed to the gods by the winning team – an alternate theory has it that the captain of the winning team would be sacrificed, a deadly if sought-after honor since it was demanded by their religion. A unique feature of the Mesoamerican ball game versions was a bouncing ball made of rubber – no other early culture had access to rubber.

If you like sports and you enjoy playing online, you should definitely click here to find entertaining games and win a lot of prizes while playing.

The most frequent story is that the game was developed in England in the 12th century. In that century, games that resembled football were played on meadows and roads in England. Although nobody really knows when people started to play football, historians think that some form of the game was played in ancient cultures like China, Egypt, or Rome.

There is no doubt, however, that modern football started in England. At the end of the 17th century, it was played by young people from rich families and between school teams.

The history of American football can be traced to early versions of two English sports, namely rugby football and association football. Both games have their origin in multiple varieties of football played in the United Kingdom in the mid-19th century, in which a football is kicked at a goal or kicked over a line, which in turn were based on the varieties of English public school football games descending from medieval ball games.

The modern era of American football can be considered to have begun after the 1932 NFL Playoff game, which was the first indoor championship game since 1902 and the first American football game to feature hash marks, forward passes anywhere behind the line of scrimmage, and the movement of the goalposts back to the goal line.

A Close Look at the  Differences

American football from its earliest days was a very violent sport on the field. The 1894 Harvard-Yale game, known as the “Hampden Park Blood Bath”, resulted in crippling injuries for four players; the contest was suspended until 1897. The annual Army-Navy game was suspended from 1894 to 1898 for similar reasons.

One of the major problems was the popularity of mass-formations like the flying wedge, in which a large number of offensive players charged as a unit against a similarly arranged defense. The resultant collisions often led to serious injuries and sometimes even death.

This injury aspect has continued into modern times. Concussions and other types of repetitive play-related head blows in American football have been shown to be the cause of chronic traumatic encephalopathy (CTE), which has led to player deaths and other debilitating symptoms after retirement, including memory loss, depression, anxiety, headaches, stress, and sleep disturbances.

The list of ex-professional football players that have either been diagnosed post-mortem with CTE or have reported symptoms of CTE continues to grow.

European football players on the field are much more disciplined, and are less physically violent than their Yankee counterparts on the field, or “pitch.” This is made up for with rampant violence “off the pitch” so to speak.

European ‘football hooliganism’ originated in England in the early 1960s, and has been linked with the televising of matches, and resultant riots and uncontrolled mayhem on the streets between opposing fans. Other European countries followed suit about 10 years later, in the early 1970s.

Researchers argue that the extent and the nature of football-related violence are influenced by different historical, social, economic, political, and cultural factors in different European countries. Social class has been a significant factor in England, for example, religious sectarianism in Scotland and Northern Ireland, sub-nationalist politics in Spain, historical regional antagonisms in Italy, and so forth.

And then, people in Europe get very angry when you call football soccer:

A Drastic Difference in Equipment

Equipment requirements are far apart, much more demanding for the American player than the European.

American professional football begins with a “pigskin” and played on 100 yards, marked off with ten-yard markers.  For each player there is the need for the equivalent of a gladiator’s armor, with specially designed helmets, mouth guards, shoulder pads, knee pads, gloves, varying kinds of shoes with or without cleats, depending on needs. Many players choose different ways to cover their face and eyes, wear head sweatbands and rubber bands around their arms. While not exactly equipment, hairstyles are often a signature feature of any given player.

European professional football simply requires shoes, socks, shorts, and a tee-shirt that has the team’s logo, and makes the wearer look good, e.g., “bella figura” for the Italians. Here too, the hair—or hairless– look is important.

Rules: From Simple (in Europe) to Complex (in America)

Although the game simply deals with putting a ball in the enemy camp, the rules to do so vary enormously.

European professional football rules are relatively straightforward coupled with enormous strategizing efforts.  Each match has two halves of 45 minutes each, basically with continuous play except when there is an injury (“or dramatic performance of such by a player”), or limited delay when an infraction occurs, and time added to the 90 minutes caused by any delay. A referee and two linesmen supervise, the match with each goal scored worth one point, plain and simple. If both teams score the same number of goals, it is a draw.

Each team has 10 players plus a goalkeeper, the latter being the only one to touch the ball with his hands, and whose job is to prevent the ball from getting into his goal. Defenders play in front of the goalkeeper. Stopping the other team from scoring a goal. Midfield players do most of the running, moving the ball between defenders and forwards. These guys seek to be near the other team’s goal and score. Of course, there is more, but these are the guts of the game.

American football rules, on the other hand, are nightmarishly complex. Four quarters, each of 15 minutes, two halves 30 minutes each, with seven officials operating on the field. Each team seeks to gain ten or more yards (not meters) over four “downs” by either running with the football or passing it, with the objective of scoring either a touchdown or field goal. As to the former, the “foot” has nothing to do with making a touchdown (worth six points). Where the “foot” comes in is at the very beginning of the game, at some point where the team with the ball must “punt,” or in kicking a field goal (worth 3 points), or after a touchdown an extra point (worth 1 point). There are ways to make two points – but I would dissuade you from further reading about this unless you think it is important to impress your boss or a future date.

Any of these points can be achieved by either throwing or running with the ball. If there is a “tie” at the end of four quarters, there are multiple overtime possibilities to find a winner.

As to the strategy for the individual players or for the team as a whole, the playbook is put together by a separate team of coaches, most closely resemble the U.S. Tax Code, a document that certified public accountants do not understand. So, you get the picture.

European football players are virtually never overweight, their physicality is in their legs and feet, and they require incredible stamina to continuously play the “beautiful game.” They must be “football” smart and develop intuitive senses of where they should kick the ball to others on their team or where the goalie will not be.

American football players come in all sizes and shapes. Some, often the running backs and pass receivers, are as svelte as any human on earth and fast as cheetahs. Others weigh in at over 300 pounds, and more closely resemble rhinos in their size (but don’t be fooled, many are very intelligent). Others have no particular physical shape, yet their skill sets are highly refined in either kicking or throwing the football.

Entertainment (other than the game)

European football matches do not lend themselves to having big-name musical stars providing a distraction from the pitch – except as glitterati in the stands, nor has the food vendor industry taken hold, perhaps other than beer and wine providers.

American football games more closely resemble Roman Coliseum arena extravaganzas, with elaborate halftime shows, and multiplex eating options and venues. And in American thinking, sports, food, and gender role are all as one, the country invented the female cheerleader as a way to excite mostly male fans whenever things are going good or bad.

This is just a tongue-in-cheek teaser to recognize that both versions are effective distractions from the greater world at large and our individual problems. With full disclosure I am treated as a Philistine because I enjoy watching American football; my wife and many friends hate it, cannot understand how I can have any loyalty to a bunch of people who have done nothing for me and are not loyal to me, and are so injurious to young men. And if you want to bet on these matches, you can visit bettingpro.ca.

Editor’s Note: The opinions expressed here by Impakter.com columnists are their own, not those of Impakter.com. — In the Featured Photo: American football in Finland: Helsinki Roosters challenging the Danube Dragons, 24 June 2011. Photo by Florian Leitner CC-BY-SA-3.0