No Result
View All Result
Home Future of Europe Series 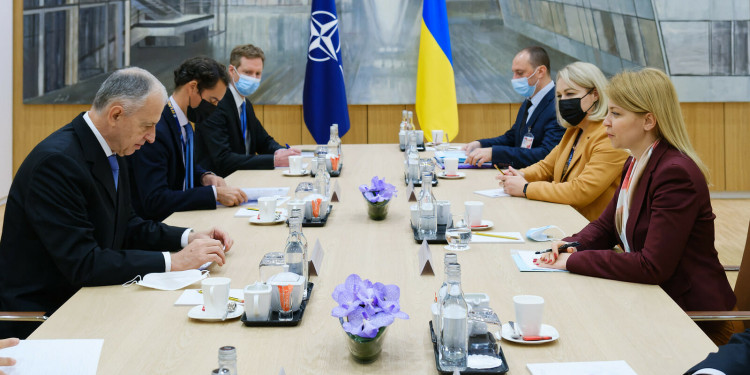 Fears over a Russian invasion of Ukraine have been mounting for some time but the US State Department stands by their clear message that ‘swift and severe’ action will be taken in the event of Russian aggression.

Latest news suggests a worrying situation in Ukraine as James Heappey reported to The Sun newspaper that “a significant number of individuals that are assessed to be associated with Russian military advance-force operations and currently located in Ukraine.”

The U.S Department of Defense has said around 8,500 American troops are on alert for the possibility of deployment to Ukraine if Russia does invade the region. According to Pentagon spokesman John Kirby the troops placed on heightened alert are going to strengthen the 40,000 multinational NATO troops that are already deployed in Eastern Europe.

Today, I spoke with European leaders in response to Russia’s military buildup on Ukraine’s borders. We discussed our joint efforts to deter further Russian aggression, such as preparations to impose severe economic costs on Russia and reinforce security on the eastern flank. pic.twitter.com/2XvTTvdLJl

Despite this message of support for Ukraine Kirby was quick to emphasize that no final decision has been made in regard to deploying the troops. NATO allies involvement at this time seems to focus on sending additional ships and fighter jets to Eastern Europe.

Russia has denounced the actions of the West as ‘hysteria’ but NATO insists it is taking such measures ‘to provide a rapid military response to an emerging crisis.’ It was never an option to pull U.S. troops out of Eastern Europe and Kirby stated that the American troops already based there are ‘to deter aggression and enhance the alliance’s ability to defend allies and defeat aggression if necessary.’

Germany has held firm for the time being on weapons exports to Ukraine, they will not be contributing any weapons to the crisis.

Related Articles: Ukraine Crisis: In The Hands Of An American Diplomat | Protests in Kazakhstan: this Unprecedented Revolt could have Global Impact

In opposition to the attitude expressed above the U.S. and UK have chosen to evacuate the families of diplomats from Kyiv.

Prime Minister of the UK Boris Johnson has addressed the situation saying that a Russian invasion of Ukraine would be “painful, violent and bloody, business” and has referred to the possibility as a “disastrous step.”

Prime Minister Boris Johnson says invading Ukraine would be a "painful, violent and bloody business" for Russia, and "could be a new Chechnya".

Britain’s foreign ministry suggested that Moscow was considering former Ukrainian lawmaker Yevhen Murayev as a possible candidate to lead Ukraine if Russia launched an attack, and said Russian intelligence officers were in contact with several other former Ukrainian politicians about planning an ambush.

However, it appears the foreign ministry has been caught in a lie, again. Murayev himself spoke to Reuters via video call and said the assertion was a ‘conspiracy theory: absolutely unproven, absolutely unfounded.’ He is prepared to take legal action against the British saying “Lawyers are preparing a mechanism for me,I will defend my honour in court.”

The situation in Ukraine is ever developing, at this time it appears the message from all sides is they will not intervene unless Russia mounts an attack and that if that were to happen it would be met with an ‘unprecedented’ response.

We will simply have to wait and see if the allegations against Russia are as unfounded as the Kremlin is claiming them to be.

Should we be worried about a war? Yes.

Editor’s Note: The opinions expressed here by Impakter.com columnists and contributors are their own, not those of Impakter.com. — In the Featured Photo:  Deputy Prime Minister of Ukraine visits NATO Jan 20 2022. Featured Photo Credit: NATO North Atlantic Treaty Organization