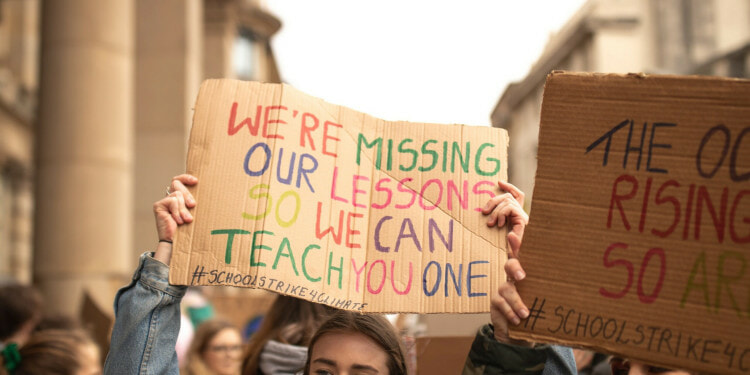 At a pre-COP summit designed to include and empower youth voices, activists used the platforms they were given to call out world leaders for the decades of “empty words and promises” their “hopes and dreams [have] drowned in.”

The Youth4Climate conference highlights the importance of youth activists and their inclusion in political processes as growing discontent and distrust has been recorded from young people around the world.

Recent studies have shown that 75% of young people find the future frightening and 65% believe their governments are failing them. This is unsurprising as reports find children born in 2020 will “endure seven times as many heatwaves and twice as many droughts as their grandparents.”

Ahead of COP26, which is due to take place in November in Glasgow, nearly 400 young people from around the world were chosen to attend this landmark youth conference in Milan to influence the upcoming climate policies which will heavily determine their life prospects.

Over three days, young delegates attended working groups and participated in intergenerational discussions. As a result of these groups and discussions, the youth activists produced concrete proposals calling for transparent climate finance systems, the phasing out of the fossil fuel industry by 2030 and sustainable and responsible tourism.

These calls will demand more clarity on who and how the fight against climate change will be financed and also whether countries will be held up to their pledges. Over $100 billion has been promised per year to vulnerable nations to help them recover and adapt as they are inundated by climate disasters that they didn’t cause.

The need for equality was a prominent theme throughout the appeals and arguments of the youth activists. They would like to see tourism revolutionised to ensure the sustainability and safe-keeping of host countries. The idea that the consumption of those in the global North should not come at the expense of those in the global South is vital to climate change negotiations and the changes that young people would like to see.

Furthermore, they are insistent that coal and other fossil fuels must be phased out by 2030 and that this should be included in the agenda for the COP26 meeting. Although the youth activists are clear about what they want, the document was not fully completed by the end of the conference. The delegates have until October 25 to fine tune it and ensure they are clear about their demands

The proposals will then be vetted by climate and energy ministers before being presented at the COP26 summit. The co-presidents of the COP, Mario Draghi and Boris Johnson, both addressed the youth and their concerns, affirming that they have “every right to be angry with those who aren’t doing enough to stop it.”

However, many of the youth activists believe that these too are little more than the “empty words” they have grown up hearing.

“So-called leaders have cherry picked young people to meetings like this to pretend they are listening to us, but they clearly don’t listen to us,” Thunberg said in Milan. “Our emissions are still rising. The science doesn’t lie.”

Prominent youth activist, Greta Thunberg, lambasted leaders who have negotiated for over 30 years with little effect. In fact, half of all carbon emissions have occurred during these thirty years. The Paris Agreement, international climate conferences and nationally determined contributions have all been signed with little action to follow as a result.

To ensure that the global temperature rise is capped at 1.5 degrees celsius and the worst impacts of the climate crisis are avoided, global carbon emissions need to be halved by 2030. Instead, they are on track to increase by 16%.

World leaders and experts hope that the COP26 in November will keep the Paris Agreement’s ambition alive and that more commitments will be made in the attempt to avert disaster. However, youth activists have no illusions as to how fruitless these negotiations can be and they are angry about the impacts they will surely have on their future.

The youth activists were acutely aware of how these impacts would unfairly and disproportionately affect certain communities more than others. Vanessa Nakate, the Ugandan delegate who founded the Rise Up movement, opened the event with a heart-wrenching and personal tale of the devastation climate change has already wrought:

“In the past few years, I have seen more and more of how the climate crisis is affecting the African continent. Which is ironic given that Africa is the lowest emitter of carbon dioxide emissions of all continents, except for Antarctica… Many Africans are losing their lives, while countless more are losing their livelihoods.”

Nakate’s voice was prominent throughout the discussions and she met personally with Draghi to demand action on climate financing. She pointed out that the $117 billion pledged to aid vulnerable states has not materialised and the effects are clear. In response, Draghi has urged wealthy nations to fulfill their promises to mobilise this money and to do so in the form of grants and not loans. Furthermore, Italy’s energy transition minister stated that he would propose doubling contributions to 1 billion euros a year.

The overwhelming sentiment coming out of the Youth4Climate conference though is that the youth have heard all these promises before and they are tired of them.

The frustration and sense of betrayal felt by youth activists was clear from the beginning of the conference. Keynote speakers, Sweden’s Thunberg and Uganda’s Vanessa Nakate, were vocal in their dismay. Danish delegate, Rikke Nielsen, suggested that around one-third of the delegates weren’t happy with the process and Italian delegate Martina Comparelli accused leaders of “youth-washing” and “green-washing” – exploiting youth activists and environmental jargon to legitimise their pledges.

Tensions and frustration boiled over at the end of the event with minor clashes outside and police intervention inside. As Draghi took to the lectern, half a dozen youth activists held up placards reading “The Emperor Has No Clothes” and chanted “The people united will not be defeated.”

The conference occurred days after hundreds of thousands of young people marched around the world in the first in-person Fridays for Future youth climate strike since the pandemic began. Youth activists were clear that three days of events did not leave them feeling empowered and heard. Instead, they would continue using their voices in whichever way they could:

Editor’s Note: The opinions expressed here by Impakter.com columnists are their own, not those of Impakter.com. — In the Featured Photo: A youth activist holds up a sign reading “We’re missing our lessons, so that we can teach you one” at a School Strike for Climate Change. Featured Photo Credit: Callum Shaw

DeepH, The New App To Help Your Mental & Physical Health